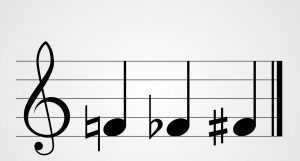 The word “accidentals” is sort of a misnomer within the world of music. When most people think about accidents, they conjure up scenes of car crashes, oil spills, and the family dog leaving an unwelcome surprise on the rug, but accidentals in music couldn’t be more different. This is because accidentals are welcome occurrences that are completely planned by a composer or songwriter. Without them, the music we all know and love would be drastically different. We’re going to introduce you to the world of accidentals to give you a better understanding of how these occurrences function within music.

In order to fully understand how accidentals in music work, you have to have at least a basic understanding of how music operates within a music theory context. Complete works or sections of music are usually played within a set key signature. Using the piano’s keyboard as a guide, we can build every major and minor key signature using simple patterns of half and whole steps: 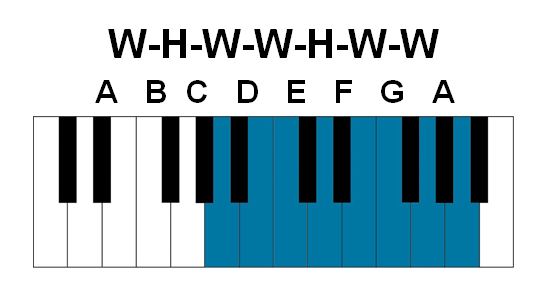 You can use these patterns to build scales and key signatures anywhere in music, though this can be somewhat difficult on some instruments. Basic patterns of major, minor, and diminished chords can be built off of each note found in these scales. The idea of “playing” in a certain key means that we’re exclusively playing the notes found in one set key. In sheet music, the set key signature is communicated at the beginning of the first measure with a displayed amount of flats or sharps. C major and A minor have no included flats or sharps.

Knowing how basic major and minor key signatures work is important here because accidentals happen when notes are played in music outside of a set key. For example, using the C major and A natural minor scales above, any added note with a flat or sharp would be considered to be an accidental. Here’s an example of sheet music with an accidental in the key of C major:

Accidentals In Other Keys

Accidentals in music are sometimes inaccurately described as being “all the black keys on a keyboard.” That description is only correct when we’re talking about the keys of C major and A natural minor. Accidentals can be sharp, flat, or natural notes depending on the context of the key.

For example, if we’re in the key signature of G major which features the notes G, A, B, C, D, E and F#, any use of an F natural note would be considered to be an accidental. Context is essential to understanding not just accidentals but everything in music.

It’s important to note here that ideas like accidentals and key signatures are meant to serve as helpful devices that explain what naturally happens in music, not to make music more complicated than it already is. The very idea of accidentals is meant to reinforce the powerful idea that music as we know it (popular and tonal music) is generally played and can be understood as existing within set keys. Here’s an example of an accidental found in the key of A:

Genres like jazz sometimes feature pieces of music that adhere to no strict key signature. This means that rather than instructing a musician to think about a piece of music being played within a certain key, players play the piece note for note without a designated key. These pieces feature tons of flats and sharps. This doesn’t mean that passages found in these pieces don’t fall within the boundaries of a set key signature necessarily, but because there are so many changes happening so fast that it’s easier to think of the whole piece as something that lacks a set key.

Why Composers Use Accidentals

Composers use accidentals because playing within one set key all the time is boring. Borrowing notes from other keys and modulating from one key to another are musical devices that provide tension and drama within the sonic story of a piece of music. Composers don’t use accidentals in music, rather they write melodies and chord progressions that sound good or interesting to them. We can use various music theory ideas like accidentals to explain what they’ve done and perhaps why they made the choices they made.

Put What You Know Into Practice

Now that you know how accidentals operate within music, try analyzing different pieces of music and see if you can identify notes that are played outside of the key. This shouldn’t be difficult, because all you’ll need to do is look for flats, sharps, and natural signs.