One of the best things about beginning to learn piano is that the keys are easily laid out for you. Unlike other instruments that take time to learn all the various positions and embouchure techniques for different notes, the piano keys are all there in front of you waiting to be played. That’s not to say that becoming a proficient piano player is quick and easy, but it does make the beginning stages of learning a bit easier. Use this piano keys chart to learn the note names and their corresponding places on the staff and you’ll be on your way to playing piano in no time! 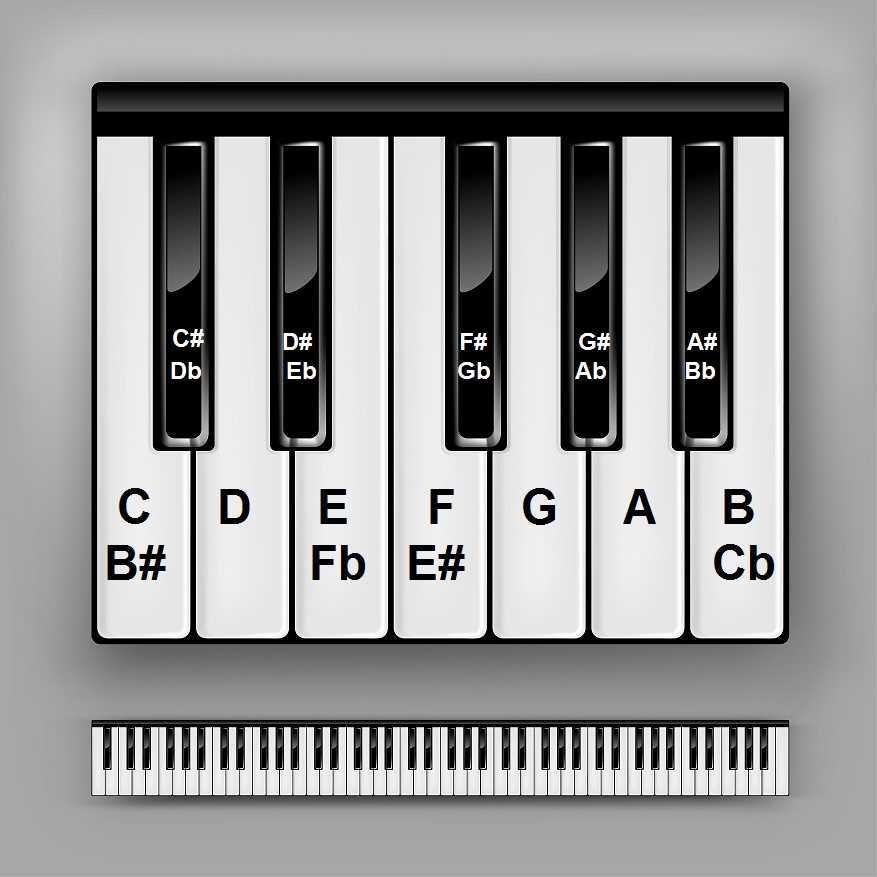 A full piano keyboard consists of 88 keys spanning seven octaves plus a minor third. While every pitch will sound different, the notes repeat in a series ranging from A-G. The distance between a note and the next time that note repeats on the keyboard is called an octave. So, for example, C-C is an octave. On the piano keys chart above, we’ve pulled out a section of the keyboard and labeled all the keys with their letter names. Notice that there are five black keys, broken into a set of two and a set of three. On the full keyboard this pattern repeats seven times, hence the seven octaves. Once you know the note names for the 12 keys shown above you’ve learned the entire keyboard!

You may have noticed that some notes have a b or a # next to the letter name. The b represents flat notes and the # represents sharp notes. Music moves in steps going up or down in pitch. When talking about steps, especially in relation to scales, we talk about half steps and whole steps. Sharps and flats raise or lower a note by a half step respectively, and the space between notes that are next to each other on the keyboard is a half step. Normally this is a black key to a while key, but between E and F and between B and C there is no black key. Therefore, the space between those two sets of notes is also a half step. Listen to the example below. The first notes are a half step (specifically C to D#) and the second notes are a whole step (specifically C to D).

You probably also noticed that some keys have more than one note name. Notes that sound the same but have two different names are known as enharmonic notes. The reason for this is because music is written in keys. The key a piece is written in will determine which notes are sharp or flat, and keys are based on their corresponding scales. Scales come in many different variations but for now we’ll just stick with major scales to keep things easy.

A scale is made up of a series of half and whole steps that span an octave. No matter what instrument you choose to play (and this includes voice!) scales will be an important part of your learning and practice routine. This is because scales and keys make up the foundations of music theory and help us understand how music is written.

Going back to our piano keys chart, take a look at the white keys starting with C. If you play all the white keys from C to C, you will have played a C Major scale. 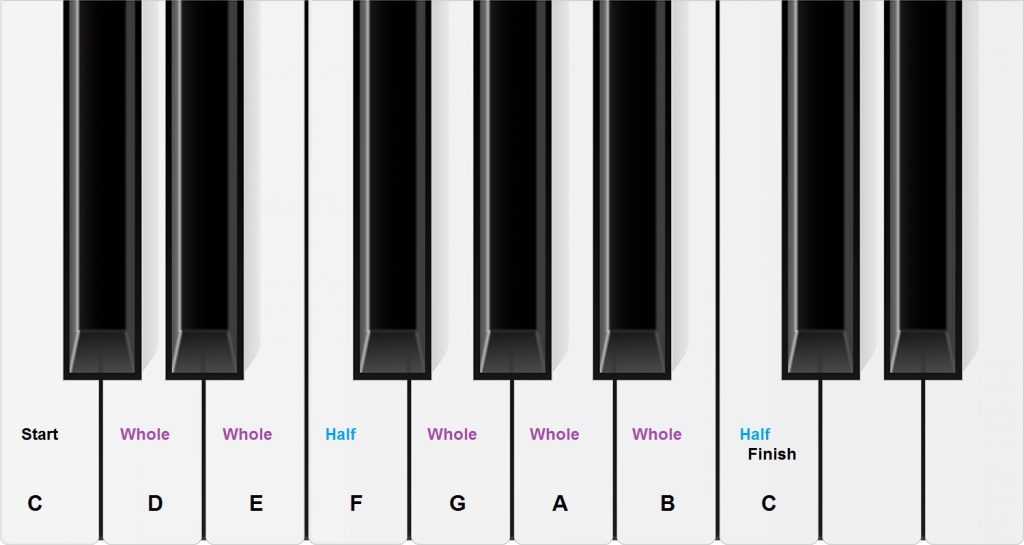 As you can see, the C Major scale is made up of 2 whole steps, a half step, 3 whole steps, and another half step. The cool thing about this is that once you know the formula you can play any Major scale. So, for example, if you start on Bb, the Major scale would be Bb, C, D, Eb, F, G, A, Bb. Even though Eb and D# are enharmonics, since we started on Bb we continue the trend and call that note an Eb when writing the scale. Conversely, if we start on D, the Major scale would be D, E, F#, G, A, B,C#, D. Even though we started on a natural note (a note with no sharps or flats), because E to F# keeps the scale in order, we will notate it with sharps instead of the enharmonic flats (Gb and Db). When you begin reading music, these patterns will help determine the key a piece is played in.

Putting Notes on the Staff

The last step to our piano keys chart is learning how the notes of the piano translate to sheet music. There are two different clefs you will need to learn in order to play piano: bass clef and treble clef. The lower notes on the piano will normally be notated on the bass clef and the higher notes on the treble clef. The two clefs do intersect as treble clef goes down and bass clef goes up. The place where the cutoff generally occurs is at Middle C. In the image below, you can see where Middle C is on the staff in relation to the keyboard. The notes on this Grand Staff follow the white notes on the keyboard. While there are lots of different ways to remember the notes on the staff, once you know where C is you can figure out where any other note is by following the alphabet.

There’s definitely a lot more to music theory and piano playing than this brief overview, but this piano keys chart should be enough to get you started.

How To Practice Piano with Correct Technique

Laura is a classically trained full lyric soprano who lives and works in New York City. She holds a BM from Binghamton University and an MM from the UMKC Conservatory of Music and Dance, both in Voice Performance. She also maintains the Musika Blog. Her teaching profile can be found here