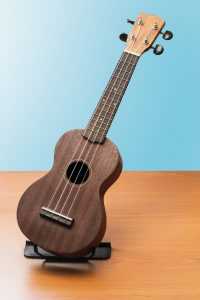 If you’re looking for an easy introduction to music, the ukulele is a phenomenal place to start. This amazing instrument manages to be strikingly versatile despite being incredibly easy to play. When you sit down to memorize a simple ukulele chord chart, you’ll be able to learn what you need to know to be able to play adaptations of your favorite songs. We’re going to walk you through some basic and not-so-basic chords that you’ll find in popular songs, but first let’s talk a little bit about some ukulele background and fundamentals.

The ukulele started showing up on the world’s musical stage in the 19th century when it was introduced by Hawaiian and Portuguese immigrants. It’s a small guitar-like adaptation of an instrument called a machete (not the sword type of machete used to slash through jungles) that gained prominence when it made its way to the United States during the 20th century.

Ukuleles, or ukes, feature four strings: G-C-E-A. Our favorite acronym to help us remember uke strings is “Greedy Cats Eat Avocados,” but feel free to create your own. Something seasoned musicians might find odd about the uke is that its bottom G string is tuned an octave higher than expected. This might seem counter-intuitive to guitarists and other string players, but it’s a special tuning that’s designed to help produce simple chords with only four strings.

Tips For Purchasing Your First Ukulele

If you’re considering buying a uke for the first time, it’s a good idea to do some serious research into finding out which ukuleles are worth purchasing and which ones are not before you make any final decisions. If you stumble across a $25 uke on Amazon with a 5-star rating, don’t believe what you see. The most important question you should ask when buying a uke is if the instrument you’re considering buying can stay in tune. Purchasing a cheap knockoff will just leave you frustrated. If possible, check out some ukuleles from a local music store so you can hold and play a few different ukes before making a decision. 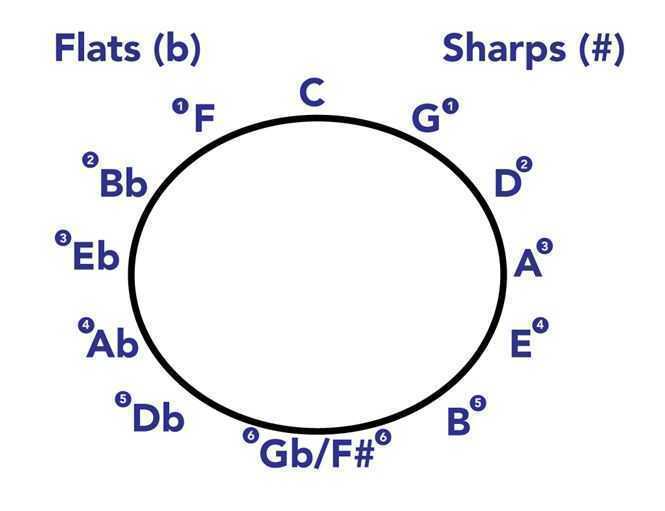 To help teach you chords, we’re going to show you a ukulele chord chart that follows the pattern of the chords you see in the circle of fifths. This chart is a visual aid that describes how accidentals, or sharps and flats, are added to each key signature in music. The key of C major at the top of the circle has no sharps or flats. All of the keys you see here are major ones, but each key comes with its own parallel minor which is found a minor 3rd (3 half-steps) lower than the major. For example, C major’s parallel minor key is A minor. Feel free to skip ahead to the ukulele chord chart at the end of the article if you don’t need a music theory explanation of chords.

Most of the basic chords you’ll find in songs adapted for the ukulele are found on the right side of the circle in the keys of C,G, and D. We’ll show you how to play the chords found in those key signatures, but first let’s talk a little bit about how to build chords and how keys work in music.

There are three types of basic chords found in major and minor keys: major, minor, and diminished. In music theory, we can build chords and scales by following simple formulas based around the half-steps (one half-step = one ukulele fret) we find on not just the uke but many other instruments. These chords are built off of the root, which is the note name of the chord.

These chords sound full and complete and are found virtually everywhere in music.

Minor chords sound “sad” to most people, though they’re used in for many different purposes within music.

These chords sound tense and extremely dissonant. They convey a wide range of emotions in music including fear, doom, and longing.

In major and minor keys, chords are assigned to each note from the scale of those keys. The chords are either major, minor, or diminished. The great news here is that these assigned chords never change. We use a simple system of Roman Numerals to describe the way chords operate in keys. This is what the Roman Numerals look like for the chords of major keys:

The larger Roman Numerals represent major chords, while the smaller ones represent minor chords. The 7th chord at the end with the circle represents a diminished chord. Here’s what natural minor keys look like:

Roman Numeral analysis is meant to help musicians understand the relationships between chords, and we recommend using this system to get a better understanding of the songs you’re trying to play.

Now that you have a good idea of how chords work within keys, we’re going to show you how to play the chords of some basic major and minor keys featured in popular songs. Try memorizing each key by focusing on transitioning from chord to chord while playing to a set rhythm. Focus on one ukulele chord chart at a time and speed up as you get better with the transitions. 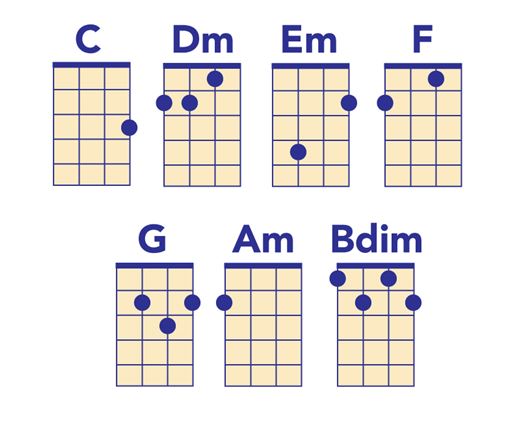 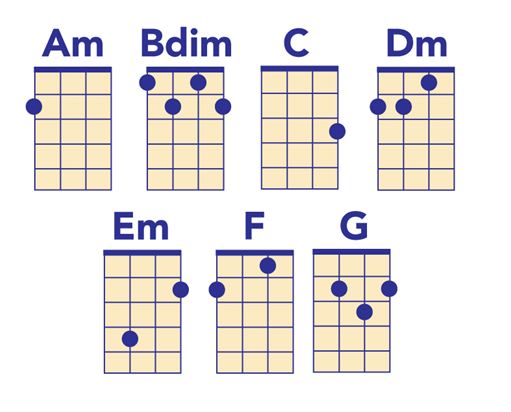 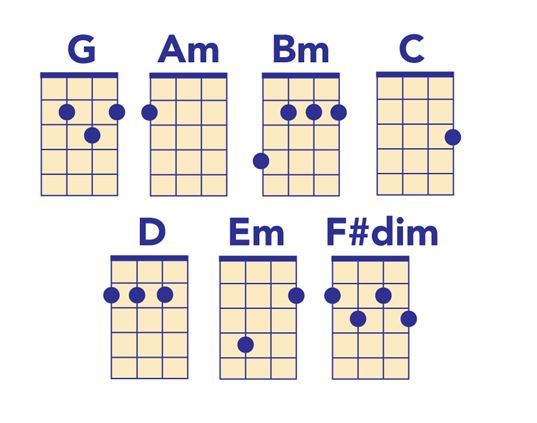 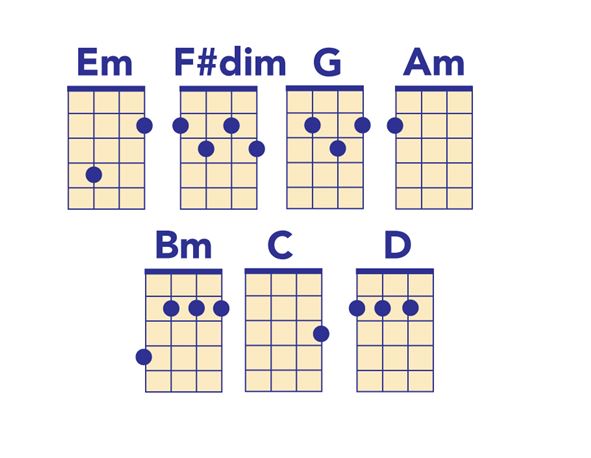 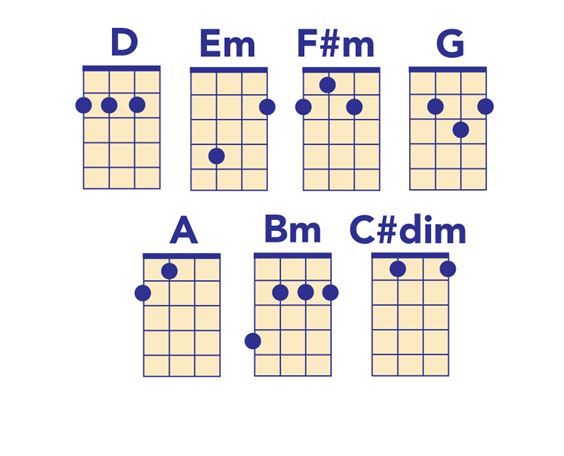 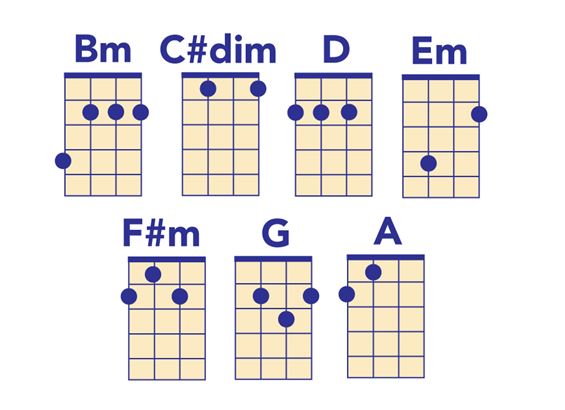 We hope this ukulele chord chart has been helpful for you. It’s a good idea to play the chords you’ve learned here to the slow click of a metronome for practice. For fun, try playing the chords from these keys out of order. Any of the chords you see here can easily be applied towards learning how to play popular songs. Experiment with adding in different strumming patterns with your right hand. Some of the shapes you learn on the uke can be directly applied to instruments like the guitar.

1 thought on “Ukulele Chord Chart: All The Chords You Need to Play Popular Songs”