I have to confess something: Maybe it’s just nostalgia getting to me, but after a decade since graduating from college with a degree in music composition the words “music theory” still manage to inspire a considerable amount of anxiety in me sometimes. Before I learned about it in school, basic music theory just seemed like a bunch of meaningless and detached rules and ideas menacingly floating around in the ether. I couldn’t have been more wrong. Music theory is a device purely meant to explain and describe the rules that govern music and the way it operates. Yes, there are exceptions, but most serious musicians in it for the long haul take the time and energy to learn basic music theory because it gives context and agency to their craft. 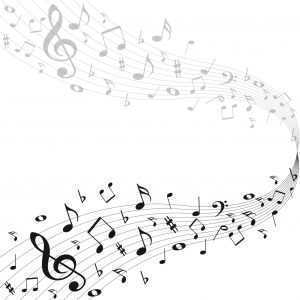 If you’re a musician who learns by way of listening to how a piece of music sounds and feels, the task of learning how to understand basic music theory concepts might feel daunting or downright impossible. Well, don’t despair! I’m here to tell you that mastering the ins and outs of basic music theory is actually not that hard. If you can memorize a few simple music theory rules and ideas, you’ll be able to gain an incredibly powerful new perspective on the art form of music, and you’ll be able to apply what you learn to whatever role you play in music.

If you have a piano or keyboard around, use it as a guide to help you understand music theory. If you don’t have access to one, I recommend printing out a picture of the keys on the keyboard to help serve as a visual of how to understand basic music theory concepts.

To fully understand something, you usually need to zoom in as far as you can to check things out on the smallest scale possible before you can fully comprehend the bigger picture of how it works. In basic music theory, the furthest we can zoom in is down to the individual pitches we hear in music and in the world around us. Let’s call these notes. Music theory gives each pitch its own name by measuring how many times it vibrates in a second. For example, on a keyboard the A above the middle C is known as “A440” because the pitch vibrates 440 times in a second (the middle C is the C note found in the middle of an 88-key keyboard). The physics behind notes can explain the tension and release that we hear in music. We’ll touch more on that in a bit.

The distance or relationship between notes is called an interval. For example, the distance between C and G on a piano is called a Perfect 5th. The “5” in the Perfect 5th interval comes from the fact that G is the fifth note in the key of C major. We’ll explain how keys and scales work later on in this article. By far, the most famous Perfect 5th in modern music is the one found in the first two notes of the theme from the Star Wars films. Other famous intervals include the minor 2nd found in the Jaws theme, the Tritone found in the theme from The Simpsons, and the Perfect 4th found in the Wedding March. Don’t worry if you don’t know what these interval names mean yet. All you need to know for now is that relationships between notes are called intervals, and that these intervals have special names. When you start to listen to music critically, you’ll begin to pick out intervals once you learn what they sound like.

Now that we’ve covered intervals, we can talk about what chords are and how to build them. A chord is two or more notes that are played at the same time. Chords usually provide the basic foundation of a piece of music, and the way chords sound and move tend to influence the character of nearly every type of music.

To help you understand how chords work, we’ll start with showing you how to build major chords. Every chord is built off of a starting pitch or root. We’ll build a major chord off the root of middle C to get started. From middle C, we’ll add a note an interval of a major 3rd above. An interval of a major third is located four half steps away from the root. So, if we count four half steps up from C, we’ll arrive at an E. Next, we’ll add a Perfect 5th above the root which is seven half steps. Seven half steps from C is G. That means that a C major chord is C-E-G. Don’t worry if you’re a little confused. Try this formula out around the keyboard to build different major chords to help you practice. 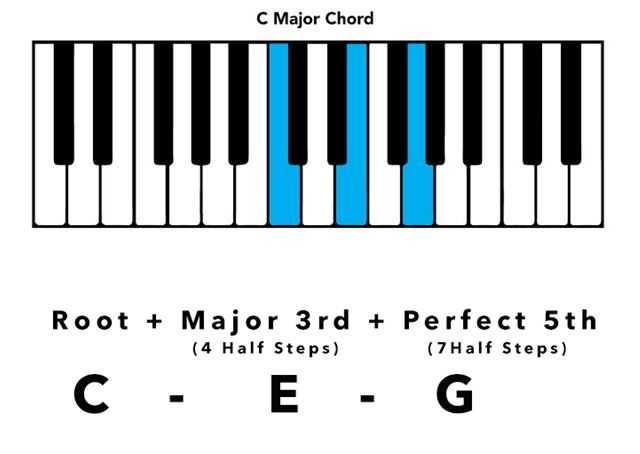 If you understand how to build major chords, then minor chords will be easy for you. Going back to middle C, build a major chord again. You should get C-E-G. All minor chords are built off of the root, a minor third (which is just three half steps), and a Perfect 5th. This means that the only difference between a C major and minor chord is that the E moves down and becomes an Eb in a C minor chord. For practice, try building a few minor chords around the keyboard. 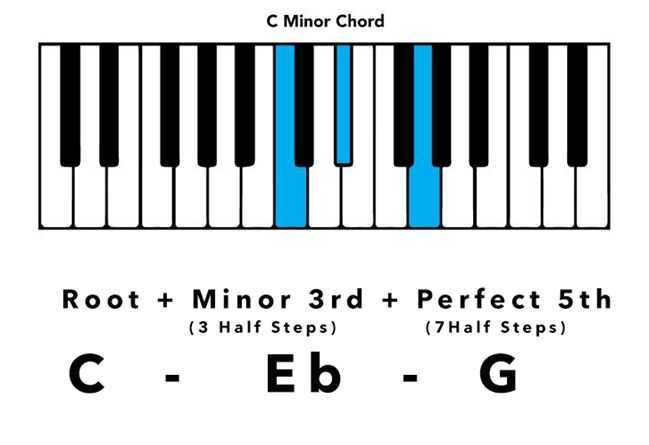 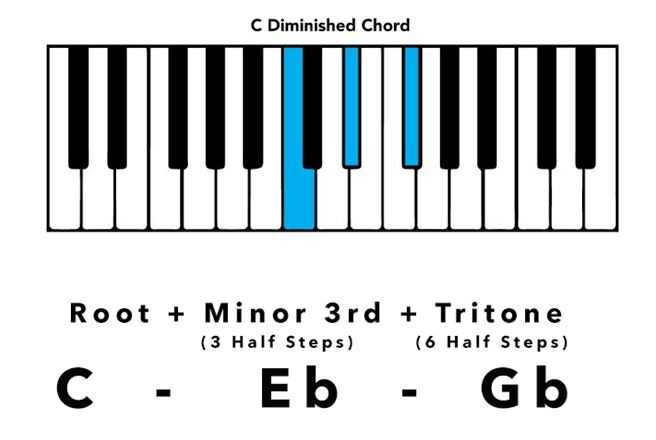 These basic chords are the foundation of nearly every style of music you can think of. We’ve used the example of a keyboard to show you what chords are and how to build them, but chords can be played on many pitched instruments. If you’re learning basic music theory on a guitar for example, try playing the C major chord in the first position. The notes you’re playing here are C-E-G-C-E. The fact that you’re playing the root and 3rd of the chord twice doesn’t alter the character of the chord in any way. Chords do begin to fundamentally change when we put the 3rd or Perfect 5th down at the bottom of the chord. These are called chord inversions, but we’ll save that for another article.

Chord progressions are different series or movements of chords that are found in a piece of music. The music we all know and love today is built off of a tension and release that naturally occurs in the physics of notes and chords. Remember the A440 we were talking about? An A880 is the note an octave, or eight keys, above A440. The midpoint between these keys is an E660, or a Perfect 5th above A440. The relationship between one note or chord and the note or chord a 5th above it is probably the most important one in music. This is due in some part to something called the overtone series. As it turns out, when we hear a single pitch we’re actually hearing a lot of other notes as well. One of the more prominent notes we hear in the harmonic overtone series of a note is a Perfect 5th. The chords that serve as the foundation of tonal music are built off of the relationship between one chord and the one five steps above it. More on that in a bit, but for now let’s talk about how chords sound together in the context of specific keys.

Like chords, major and minor keys are built off of simple formulas and are an integral part of basic music theory. Going back to middle C, let’s build a major scale here. Starting with middle C, play all the white keys until you reach the C an octave above. What you just played was a major scale that combined whole steps and half steps. Scales are a series of notes that explore keys. All major scales are built using this series of whole and half steps: Whole, Whole, Half, Whole, Whole, Whole, Half. Try building major scales at a few different spots around the keyboard.

Major and minor keys are important because each note in a key has its own unique chord. The chords in these keys have their own unique sound and character that never changes. Major and minor keys feature a combination of major, minor, and diminished chords. The relationships between these chords are constant and are so familiar that the average musician could pick them out in a piece of music just by listening. We use a system of Roman Numerals to label chords in major and minor keys.

All major keys feature this series of chords:

All minor keys feature this series of chords:

Since the progression of basic chords follow the same pattern no matter what major or minor key it starts in, we can use Roman Numerals to talk about the relationships between chords in music. For instance, in the sound of the chord progression 1-6-3-7 will sound the exact same way in any major key you play it in. Try playing this progression in a few different spots around the keyboard.

So, let’s recap for a second. We’ve covered intervals, basic chords, and how to apply them to major and minor keys. You now have enough basic music theory knowledge to be able to build every chord found in every major and minor key on the piano. Not that difficult, right? If you’re learning music theory on another pitched instrument, you can apply everything you’ve learned here to that as well.

Modulation is a term that describes shifting from one key to another. For instance, if you’re playing a song in the key of C major and you come across a D major chord, then you’re modulating to a different key even if it’s for a short period of time. The easiest way to modulate from one key to another is by introducing the new key’s 5 chord into a chord progression. The key of C major has no sharps, so when we come across a chord with the notes D-F#-A, we can assume that the song has modulated to G major.

Put It Into Practice

There are about a million other basic music theory thoughts, rules, and ideas that can’t possibly be taught in a short article, but the information we went over today should be more than enough to get you started. One of the best ways to master music theory concepts is to begin listening to music critically and in a way that helps you understand and identify things like chords, intervals, and chord progressions. For more helpful articles about music, check out the Musika Lessons blog.

2 thoughts on “Basic Music Theory: A Guide to Keys, Chords, Progressions, and More!”