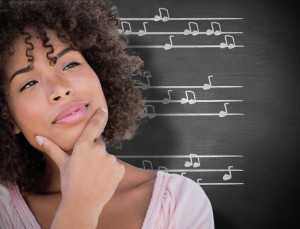 For some musicians, music theory is one of those phrases that inspires anxiety, dread, and even panic, and it’s no surprise why. If you’re not familiar with music theory, terms like “Roman Numeral Analysis” and “Triad Inversions” are probably enough to make your stomach feel a little queasy. Before I decided to study music composition in college, I distinctly remember looking down at sheet music and thinking, “This is insane. I’ll never be able to understand this. Why does this matter?” I’m going to show you how music theory can improve your songwriting.

Music theory isn’t out to get you. I promise. Its purpose is to add some order to the chaos of sound by explaining things. And if you’re a songwriter, understanding why music works the way it does can do nothing but good things for your craft. How many times have you come up with a fantastic idea for a song that went nowhere because you just couldn’t take the song where you wanted it to go? Understanding music theory will give you songwriting options that you never thought you’d have. To make things easy, I’m going to explain how music theory can improve your songwriting by using the piano as a reference point. You don’t need to know how to play piano for this article to be helpful, but you might want to print out a picture of piano keys to help you understand certain music theory terms. Garage Band software on Apple computers has a feature where you can see and play a keyboard, so use that if you need it.

What Is Music Theory?

Music theory is the study of the theoretical elements of music including sound and pitch, rhythm, melody, harmony, and notation. The idea of what creates pitches and the relationships between pitches is not only music theory but also science. When you play the A above middle C (the middle C is the C note in the middle of the keyboard) on the piano, that note has a frequency of 440 Hz. Hz, which stands for hertz, means vibrations per second. So, when you play the A above middle C on the piano, you’re playing a note that vibrates 440 times per second. All that vibration is what creates the pitch you hear. Now here is where it gets a bit tricky. When you play A440, you’re not just hearing one note but actually many notes. This is called the overtone series. The most prominent secondary note you hear is another A an octave above A440. What’s an octave? Double the 440 vibrations per second from A 440 and you’ll get a higher A note of A880, which is an interval of an octave.

Intervals are the differences between pitches. Understanding the relationships between pitches is the bedrock of music theory. Let’s get back to A440. When you play A440, the first secondary note you hear is A880, and the second note you hear is E660. E 660 is exactly halfway between A440 and A880. This is called a Perfect 5th, and it’s the most important interval in all of music theory. Think of the first two notes played in the Star Wars theme. That’s the sound of a Perfect 5th and if you listen close enough you’ll start to hear it in all the music you listen to.  A lot of composers believe that music is nothing more than a journey between one note and its Perfect 5th. That’s simplifying things a bit too much in my opinion, but they’ve got a point. So, we’ve discussed two intervals so far: the octave and the Perfect 5th. There’s a whole bunch of other ones, but let’s move on for now in the journey of learning how music theory can improve your songwriting.

Now that we’ve talked about pitches and intervals we can move on to chords. A chord is when you play two or more pitches at the same time. Play any two notes together on the piano and you’ll be playing some sort of chord. If you take the time to learn the formulas behind building simple chords you’ll be able to play chords anywhere on the piano. Let’s begin with major chords.

For the sake of simplicity, let’s build a major chord starting with middle C. We’ll call this C the root note. The best way to learn how to build chords is by counting the steps between keys. The distance between C and C# is called a half step (the distance between white keys and black keys are half steps). Count 4 half steps above C and you’ll get an E. An interval of C to E is called a major 3rd. Now we’ll add in a Perfect 5th above the root note to get the last note we need. From C, count 7 half steps and you should get a G. Play C-E-G together and you’ll get a C major chord. The formula behind all major chords is the Root + Major 3rd + Perfect 5th. We’re using a piano as an example because it’s easy, but everything I’m talking about today transcends the piano and can be played on all instruments that play multiple pitches. Try this formula anywhere on the piano and you’ll find that it works. Just make sure you’re counting the half steps correctly. 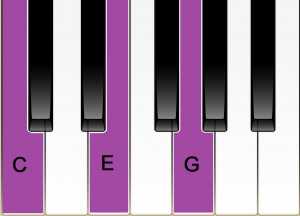 Now I’ll show you an easy way to build minor chords. Play that C Major chord again and then lower the E down a half step. This changes that major 3rd to a minor 3rd. One little adjustment changes the chord drastically. This is a C minor chord. The formula behind all minor chords is Root + Minor 3rd (3 half steps) + Perfect 5th. Try playing major and minor chords in different spots around the piano. If something sounds off, double-check your fingers and try again. Being able to know how to build major and minor chords anywhere on the piano will do great things for your songwriting. After all, when it comes to creativity you want access to every option available, right? 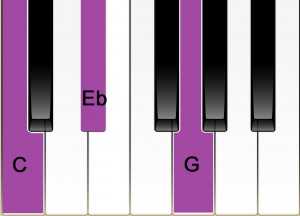 Before we move on from chords to how other music theory can improve your songwriting, let’s learn how to build an important chord called the diminished chord. Starting with middle C, build a minor chord using the Root + Minor 3rd (3 half steps) + Perfect 5th (7 half steps). Now, lower the Perfect 5th interval down a half step and you should have a chord with the notes C-Eb-Gb. Diminished chords are tension chords, essentially. Their purpose is to add dissonance and drama into music. Pop songwriters normally veer away from these chords, but a smartly-placed diminished chord can do huge things for your songwriting. The formula behind diminished chords is Root + Minor 3rd + Tritone (6 half steps). The tritone is behind all the tension you hear in the diminished chord, and the interval was actually banned in Renaissance church music and labeled the “chord of evil.” Sheesh! 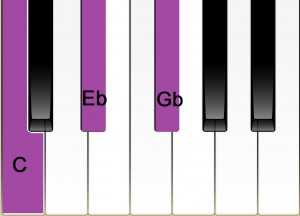 Now that you know how to build major scales and a few chords we can begin to talk about major keys. When you play a scale, you’re essentially exploring the tonality of a key note by note. Each note in the major scale has its own chord within the key. These chords are major, minor, or diminished, and they’re always arranged in the same order. The 7 chords you’ll find in major keys are 1 major, 2 minor, 3 minor, 4 major, 5 major, 6 minor, and 7 diminished. Roman numeral analysis is the process of analyzing the chords in major and minor keys, but for the sake of simplicity, we’ll stick to regular numbers for this article. Starting again with middle C, build every chord in the key by using the chord formulas I discussed earlier. This will take some practice, but start to play different major scales and chord progressions all over the piano. Once you know what to listen to you’ll be able to identify your mistakes. If you want to get serious about songwriting, knowing how to play and identify chord progressions is paramount.  For instance, in pop songwriting the relationship between the 1, 4 and 5 chords is unavoidable. The 12 bar blues is a chord progression found in thousands of songs of every kind of music and has largely shaped the way all popular music sounds today. The chords in this progression are:

Memorize the 12 bar blues in a few different keys and pretty soon you’ll start hearing it everywhere. You may not want to write blues music, but this progression’s ability to convey tension transcends genres and actually matches the natural linear form of a story. Get familiar with chord progressions like these and then make it a goal to try and add your own unique spin to them. The ability to identify chord progressions will help you out of a songwriting rut if you find yourself writing the same sort of song over and over again. When I started writing songs, I noticed that I’d often gravitate toward a 1 – 6 – 3 – 5 progression. I still like how the progression sounds, but it doesn’t hold tension the way other progressions do, so I normally steer clear of it. Engaging chord progressions are a great way of how music theory can improve your songwriting.

Once you learn how to play chords within a key you can work on going from one key to another within the same song. This process is called modulating. Done correctly, modulating is an ideal way to convey tension and emotion within a piece of music, but it’s vital that shifting keys is done in a way that serves the music you’re writing. One of the easiest ways to modulate is to introduce the 5 chord of the key you’re modulating to into a chord progression. For instance, if I’m playing a chord progression in the key of C major and I want to switch to the key of G major, then adding a thoughtfully-placed D major chord into the progression is an easy way to get there. 5 chords hold lots of tension, and the listener will intuitively understand that the music is shifting to a new key.

After you master the art of building major, minor, and diminished chords, you’ll want to add different notes and voicings to your chords to keep them interesting. Chord inversions happen when you put a note other than the root at the bottom of a chord. A C major chord is C-E-G, but when you change the order of the notes to E-C-G you’re inverting the chord, and it will sound different and a lot more interesting depending on the song’s context. If you want to hear an amazing use of inversions and perfectly-arranged chord voicings, listen to God Only Knows by The Beach Boys. Experiment with extended chords by adding non-chord tones (notes that don’t fit into a chord’s formula) into a chord. Each added note will give your chords a new identity and feel that you can’t find with your garden variety major and minor chords. 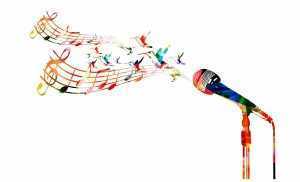 Now that you know a little more about music theory, you’ll be able to use these tools to help you write more interesting songs, but it’s best not to obsess over the theory side of songwriting. Creativity and spontaneity are the greatest motivators for songwriting, and being overly-concerned with music theory can derail your unique process. Above everything, your ears and taste should guide your songwriting process, and music theory is just another tool at your disposal to build a good song. How music theory can improve your songwriting is ultimately up to you.