In this post we will learn what comprises scales, how scales relate to modes, and how to utilize modes and scale positions to map out all the available notes for a given key on the guitar’s fretboard.  This knowledge is particularly useful for guitarists who are interested in soloing and improvisation.

We will do so without trying to get bogged down by too much music theory, however the modes are a wonderful introduction to understanding how one set of notes and intervals relate to each other and create a wide variety of sounds and moods.

To begin, let’s start with some fundamental basics about music theory. In Western music there are a total of 12 different notes available. These 12 notes repeat themselves indefinitely, but are essentially restricted within the range of human hearing. If one were to write them out, they would look as such:

(we won’t get caught up on sharps and flats for the time being, but they are essentially two sides of the same coin. A# = Bb, G# = Ab, etc)

When these notes are played in order it is called Chromatic, and a scale consisting of all 12 notes is called a Chromatic Scale.
A Scale is (most commonly) a series of 7 different notes that resolve at the original note an octave higher. Thus, a C Major scale would look as follows:

Scales can be broken up into two basic categories: Major and minor.  Major scales will sound happier and more upbeat while minor scales tend to have a sadder quality, generally speaking.

There are several different types of major and minor scales, however what differentiates the two is the 3rd note of the scale. Major Scales have a Major 3rd interval while minor scales have a minor 3rd interval.  This is determined by the total amount of notes between the 1st and the 3rd note (chromatically speaking).  A Major interval will have 4 chromatic steps between the root and the 3rd, while a minor interval will only have 3 chromatic steps.

The same interval counting can be done for any root note, for example the major 3rd of D is F# and the minor 3rd is F

Now that we know the difference between major and minor keys, and that scales consist of seven notes, we can start to talk about modes. Essentially, modes are the same 7 notes of a scale, but start on a different root note so that the following pattern emphasizes a certain tone or feeling (variations on major or minor).

If we were to play a C scale starting on the root note C, it would be a C Major scale, also known as Ionian.

If you were to play a C scale starting on D, it would form a D minor scale known as D Dorian.

All of these modes consist of the same notes, but changing the root note (and subsequently the intervals between the notes) creates a completely different tone to the scale.  These may not be immediately apparent when noodling up and down the fretboard, however when played over background accompaniment and emphasizing the different aspects of the scale,  you can really start to explore the different characteristics of each mode.

Modes as a Guitarist

While other instruments such as keyboard have to memorize which scales have sharps and flats, the beauty of guitar is that if you learn a scale in one position, you can easily move it up or down the fretboard and transpose the scale without changing the finger positions!

Given that all the modes are just varieties of the same seven notes, once you know where to find these notes on the fretboard you will have access to all the available notes for a given key.  At that point the only thing limiting you is your own imagination!

One of the easiest ways to map out all the available notes on the fretboard is by playing in seven different positions corresponding to the root note of each mode.

To clarify: while these seven positions correlate to the root note of a given modal scale, they are essentially all one of the same scale, different faces for the same grouping of notes, regardless of place or mode.  These positions are simply a way of mapping out all the notes for any mode you may find yourself playing. 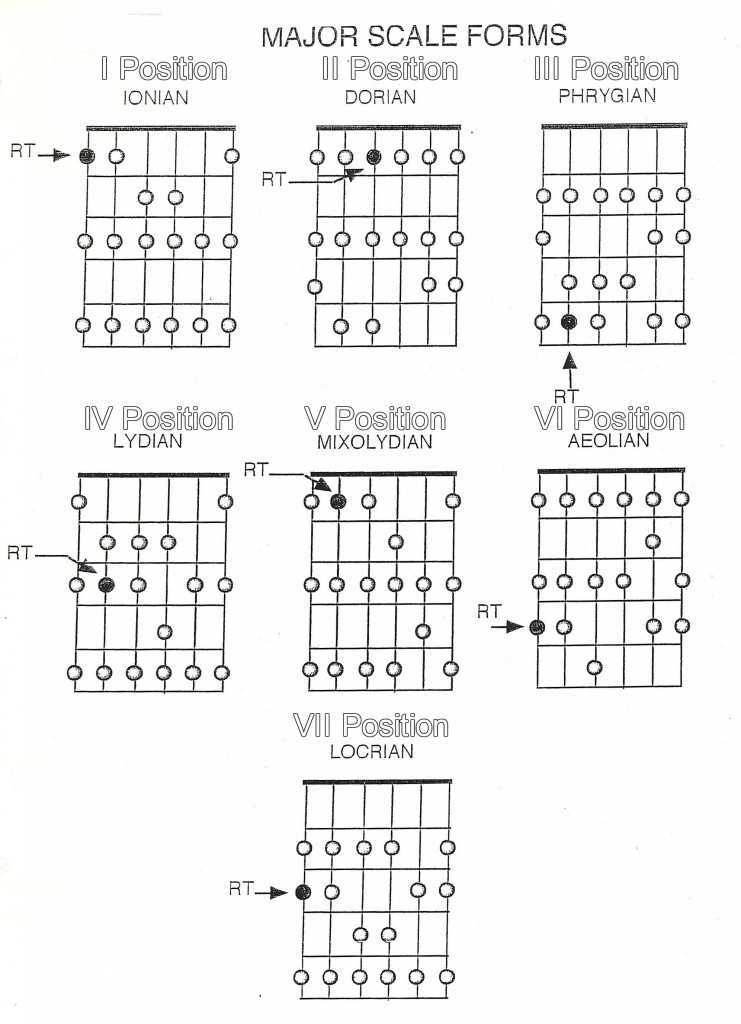 In this diagram, let us for a change say that F is the root note (the darkened note) and that we are playing in F Ionian.  This is helpful because F is the 1st fret on the E string.  As such, I Position would start on the first fret; II Position would then start at G on the 3rd fret; III Position at A on the 4th fret; IV Position on the 6th fret; etc. The positions move all the way up the fretboard, culminating at the octave on the 13th fret and repeating itself.

Essentially, what these scales are showing is every available note you can play in the key of F Major entirely mapped out on the fretboard.  Not only that, but with a little knowledge of music theory these scales can be utilized in a variety of different keys. For example if you are playing a song that is in D minor, you can use all of these scale positions because D is the relative minor of F. (More on relative majors and minors coming soon!)
In summary if your goal is to comfortably solo across the fretboard with a thorough knowledge and awareness of available notes, definitely practice and learn these scales up and down the fretboard! In doing so, you will familiarize yourself with areas of the guitar that you may otherwise avoid.