For as hugely impactful music can be, it can sometimes seem like a shapeless force in our world that’s difficult to fully comprehend. But even though we can’t see, feel or touch music, it’s absolutely something that can be built and understood with a series of concrete never-changing rules. One of the foundational pillars behind virtually all of the music we hear in popular culture is the musical mode. This article is part one in a special Musika Lessons series on modes. Starting with the Ionian Mode, we’re going to show you how to play each mode, but first let’s talk a little bit about what modes are and why they’re so important.

What are musical modes?

A musical mode is defined as a type of scale in music that has consistent musical behaviors. They’re a crucial part of Western Music, which is a term that’s now generally used to describe tonal music, or music that’s tonally predictable and easily understood through the lens of music theory. Everything from chart-topping pop hits to breakfast cereal jingles is considered to be Western Music. 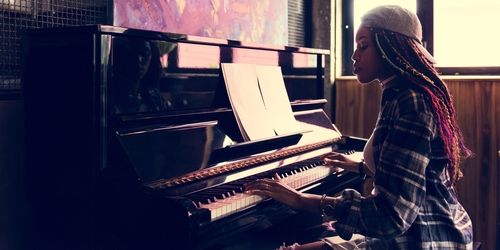 If you’ve played simple major and minor scales on your instrument, then you’re already familiar with two musical modes even though you might not know it yet. Composers and songwriters use modes as devices to create moods and sounds within their music. Since every mode boasts a completely different feel, think of them like different colors of paints on a painter’s pallet. The sound of modes range from sounding full, complete and happy to dark and dissonant.

To help you understand not only the Ionian Mode but also the rest of the musical modes, we’re going to show you how to play it on the piano. Here at Musika Lessons, we love every instrument, but the piano makes the most sense for teaching things like modes. We’re going to be talking about things in terms of whole and half-steps––a half-step would equal one fret on a guitar––so apply what you learn here to your own instrument.

The Ionian Mode is the major scale

Somewhere along the line, musicians and music theorists started calling the Ionian Mode the major scale. The word “Major” is pretty fitting because major scales and keys are an integral part of all the music we hear on a daily basis. The notes found in this mode are what forms the basic chords we hear in major music keys. There’s too many examples of the Ionian Mode found in music to count, and everything from “Happy Birthday” to Bach’s “Minuet In G” is in a major key.

To play the Ionian Mode on your instrument, you’ll have to memorize its unique makeup of whole and half-steps. These whole and half-steps in music are also called intervals, but the way. We’ll show you how to build this mode in the key of C, but it can and should be adapted to other keys as soon as you can if you want to fully internalize the information here. 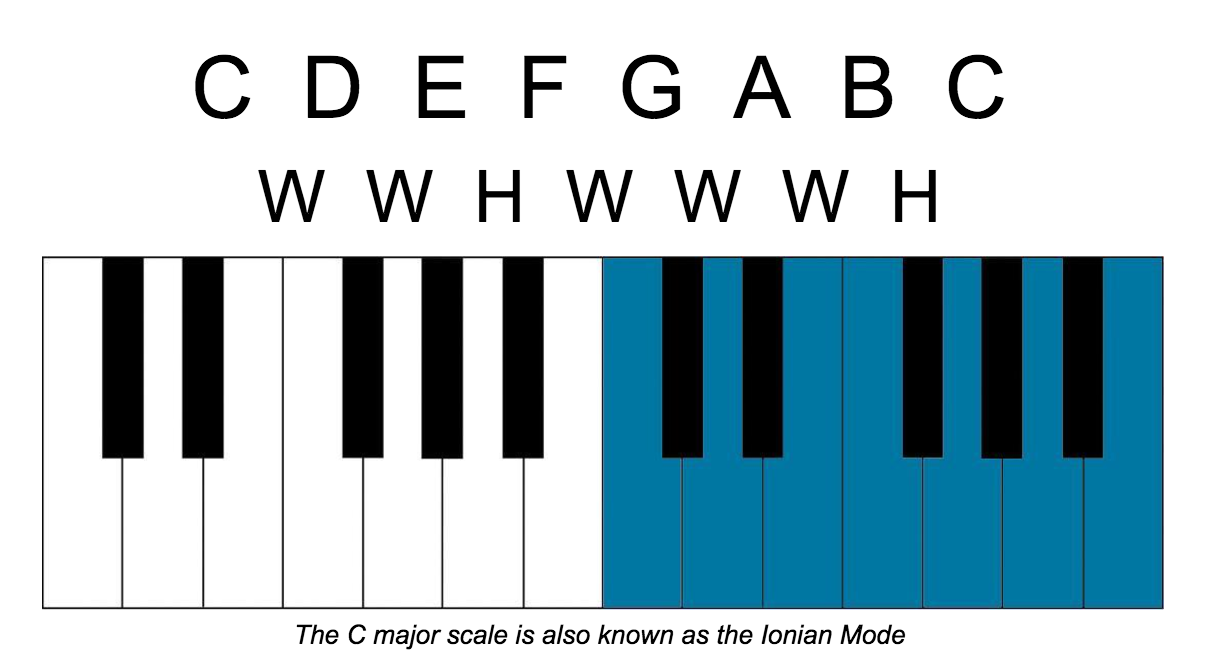 In the visual guide above, you’ll see a series of W’s and H’s. W’s represent whole steps on the piano and on any instrument. A C note moving to a D is a whole-step, or the interval of a major second. A half-step if the distance between C and C# or E and F. The interval there would be a minor second. The Ionian Mode here is represented by all the white keys on the keyboard, but every other major scale in music has one or more accidentals (black keys) in their unique pattern of notes.

Like we mentioned before, this mode is used all over tonal music. Each unique note in the mode can be combined in a way that creates the different chords we hear in major keys, and progressions of chords serve as the harmonic foundation of everything from songs to symphonies.

Individual notes from this mode are what form the melodies we hear in music written in major keys. Melodies, which are individual lines of notes, are what listeners typically gravitate toward and remember after listening to a piece of music. Popular songs typically feature a prominent vocal melody, and art and classical pieces of music usually include instrumental melodies. 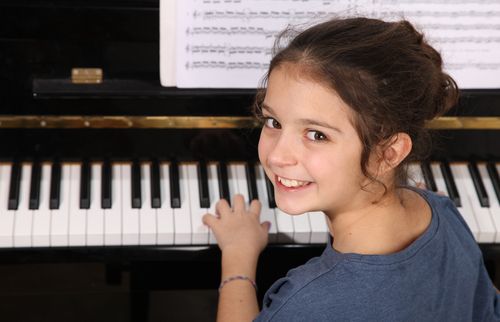 Once you begin to understand things like modes in music, everything begins to make more sense when you critically listen to songs and pieces of music. But we’re not done yet! The Ionian Mode is just one out of seven modes in music. Stay tuned for more! For more helpful articles about the world of music, check out what else we’ve got posted on the Musika Lessons blog!