Whether you’re completely new to the piano or have been playing for decades, having a solid grasp of what minor scales are and how to play them is mandatory if you want to be a serious pianist. All scales, not just minor ones, are much more than simple finger exercises. Scales are important windows into the world of music theory, and scales are integral in the construction of the keys we hear in music. Having a basic idea of how to build minor scales will help you not only inform your playing, but also improve the way you listen to and understand music. In this article, we’ll show you how to build and understand minor scales for piano. 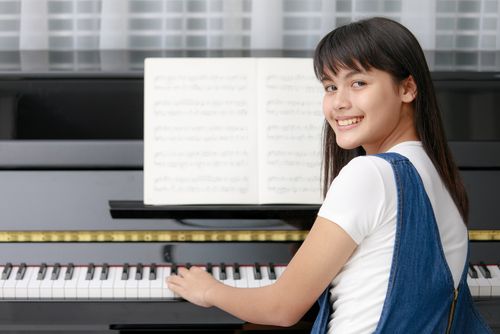 Why minor scales are important

All scales are an important part of music theory. Scales, which are also called modes, are a step-by-step sequencing of the different keys we hear in music. The notes found in scales are what forms not only the chords we hear in music, but also the instrumental and vocal melodies that form so many of the songs and pieces of music we hear. When you begin to understand what scales are and how they’re constructed, you’ll begin to play and hear chords, keys of music and melodies in a whole new light.

What makes something minor

Like in chords, certain sets of intervals,––intervals are the note-to-note relationships we hear in music––determine whether the scale you’re hearing is major or minor. The pattern of whole and half-steps in music is what makes the unique sound of a scale. Luckily, these note patterns are the exact same no matter what key you’re in, so memorizing one minor scale pattern will give you access to minor scales anywhere in music. That’s hugely important information that can help you no matter what you’re doing with music.

There’s three types of minor scales not only for the piano but also all of music: natural, harmonic and melodic. Each type of scale sounds totally different, and feature notes that are arranged in different ways.

Natural minor scales, which are also called Aeolian modes, are the most common form of minor scales found in music. The mode is named after an island chain found off of the Mediterranean coast called the Aeolian Islands, and the origins of this scale reach as far back as Ancient Greece.

In modern music, the natural minor scale is unavoidable. Yes, it’s often used to convey emotions like sadness and despair, but music featuring this scale is capable of showcasing a diverse and complex array of feelings and sounds. Some modern songs that use the natural minor scale are Bob Dylan’s “All Along The Watchtower” and R.E.M.’s “Losing My Religion.”

To make things easy, we’re going to show you how to play these minor scales for piano in the key of A, but once you’ve memorized the pattern, begin moving it to other keys on the piano for practice. The idea here is to internalize this information as firmly as you can, not just in a couple of keys, but within music theory in general. The pattern of whole and half steps are what you’ll use to build minor scales in music. A “W” represents a whole-step, and a “H” represents a half-step. 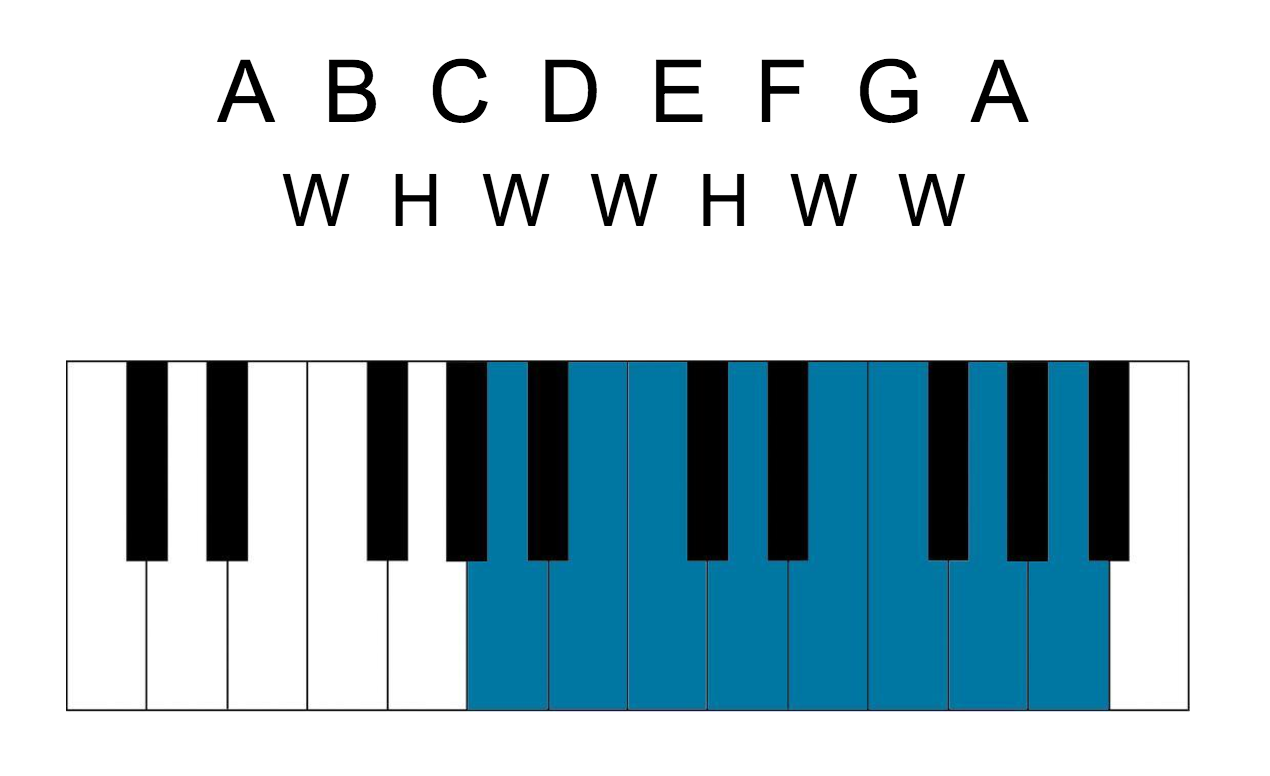 First, work toward memorizing and identifying what this scale sounds like before you attempt to play it in other keys. When you start learning this scale in other keys, always have a pencil and paper out and ready so you can get in the habit of writing down patterns of notes before you try actually playing the scales on the piano.

Melodic minor scales are the only scales in music to have a completely different sets of notes depending on if you’re ascending (going up) or descending (going down). Over the years, songwriters and composers like Mozart have taken advantage of this unique feature, but other music-makers go out of their way to avoid it. These scales can be found in all sorts of modern music, but they’re frequently featured in metal and hard rock genres during solos that are typically played on guitar. 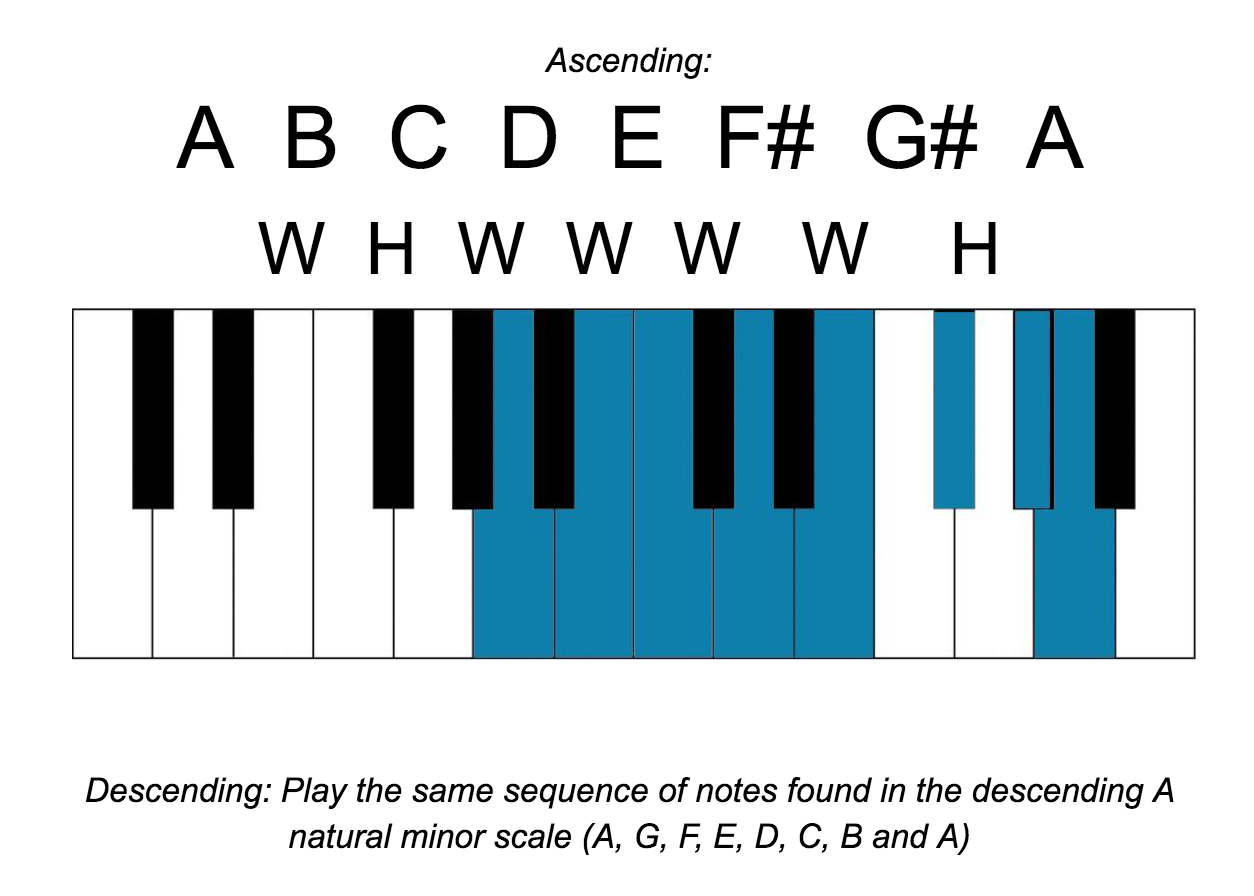 The unique meandering sound of Middle Eastern music is built off of the harmonic minor scale. This sound comes from the scale’s raised 7th degree, which boasts a completely separate feel than the melodic and natural minor scales. Sometimes referred to as the Egyptian or Gypsy scale, this scale is sometimes found in jazz and art music, and in popular songs like “Easy Please Me” by Katy B and “Clair” by Gilbert O’Sullivan. 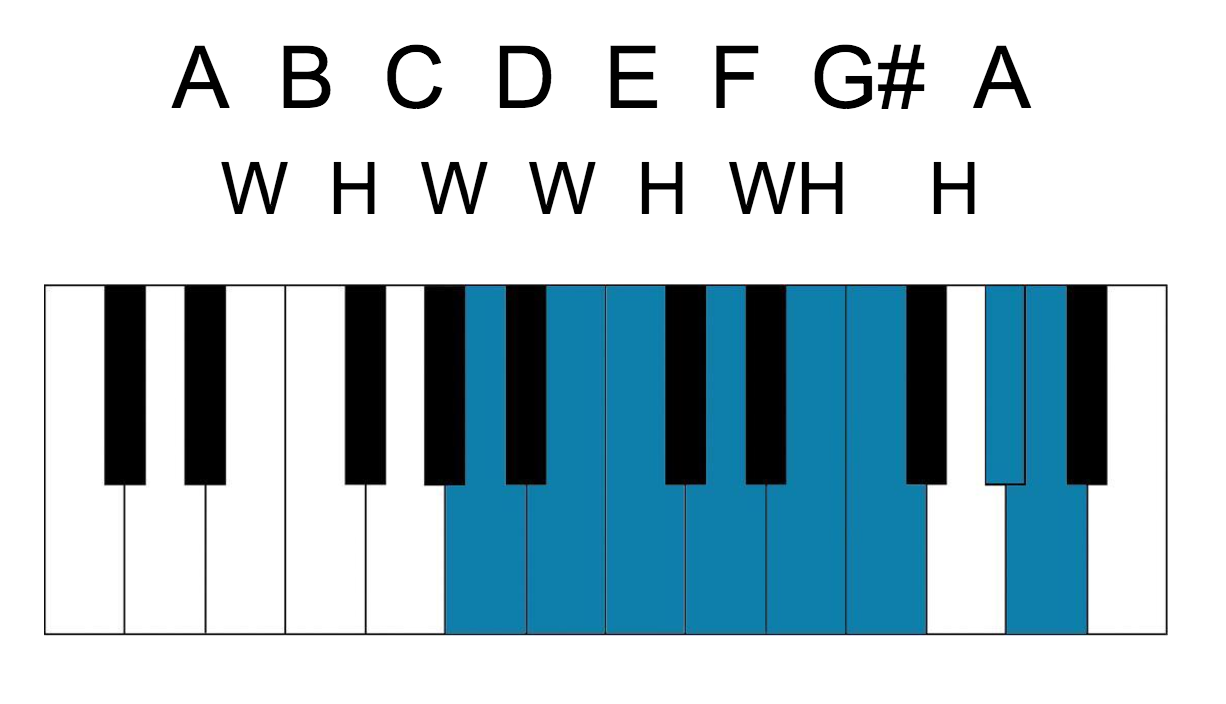 In the visual guide above, the “WH” represents the distance of a whole and half-step added together. In terms of intervals, it would be an augmented second or a minor third. Proving how incredibly impactful just one note can be, the only difference between this scale and the natural minor scale is the sharped 7th scale degree. 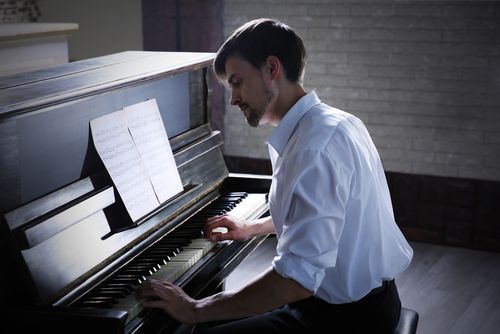 Learning these three scales in the key of A is a crucial step towards knowing how minor scales for piano work, but don’t stop here. Make it your goal to be able to play minor scales in every key in music. And the only way to do that is to have the patterns of each minor scales unique whole and half-step signature memorized perfectly. When building these scales, make sure to start writing down the sequences of notes you build using these patterns. Over time, you’ll begin to memorize not only the process of how to build these scales but also the notes themselves.

Uses for minor scales in music

Minor scales feature all the notes and chords you hear in minor keys. Melodies draw from this material and distinct chords are built on each scale degree in minor keys. How does this help you as a pianist? Well, aside from the physical benefits playing all scales gives musicians, knowing how to play and understand minor scales anywhere in music is crucial if you want to be a well-rounded pianist. This knowledge is massively helpful whether you’re interested in writing, improvising or just want a better understanding of the music you play on a daily basis.

In the material you play, start looking for passages of notes that are found in minor scales. This will help give you a broader picture of the purpose of scales in music theory and in the music you interact with. And if you’ve got a strong enough ear for it, start trying to identify natural, harmonic and melodic minor scales in the music you listen to for practice. 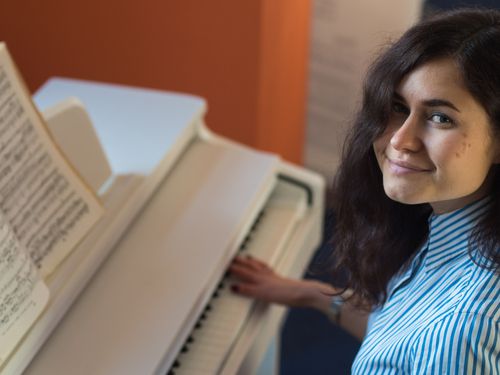 If you need more help understanding minor scales for piano or just your instrument in general, we recommend finding an experienced piano teacher in your area to work with. Guides like this one are helpful, but nothing substitutes the warmth, patience and experience that comes along with working under the instruction of a seasoned teacher. More than just minor scales, piano teachers have the ability of instructing students in a variety of areas and condensing the information down to make it easy to understand. For more helpful articles about the world of music, check out the Musika Lessons blog for more helpful posts like this one!

2 thoughts on “Minor Scales for Piano”