If you’ve been playing guitar for a while, it can get easy to feel like you’re in a rut. Playing the riffs, scales and chords that were so difficult to master when you started become almost second nature once you’ve put the time and effort into learning how to play, but that prowess sometimes comes attached with boredom and the desire to change things up and expand your musical horizons. Drop D tuning is a great way to add new life to your playing because it forces you to think about your instrument in a totally new way. All the material you’ve already mastered won’t be able to be played the same way in this tuning, so it forces you to change the way you think about riffs and chord shapes. If you’re interested in completely changing the way you play guitar, Drop D tuning might be just what you’re looking for. 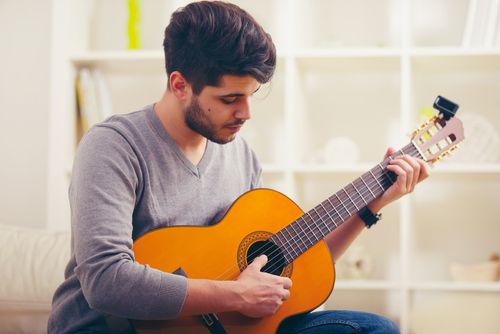 What is Drop D tuning?

Drop D tuning is when the guitar’s 6th string is tuned down from an E to a D. In standard tuning, from low to high, the strings are tuned E, A D, G, B and E, but in Drop D tuning they’re tuned D, A, D, G, B and E. There’s tons of different ways to tune the guitar, but Drop D is an especially popular tuning because it’s easy to tune to and the shapes aren’t difficult to master.

The musical term for when stringed instruments stray from their standard tunings is called Scordartura, which means “mistuning” in Italian. In all alternative tunings, not just Drop D, new combinations of notes and chord shapes are unlocked and this gives musicians access to a pallet of new sounds and ways of playing that couldn’t be possible by playing in standard tuning.

A brief history of alternate tunings

Alternate tunings, which is a nicer and more accurate description than “mistunings,” might seem like something newer in music with how much they’re used in metal and rock music, but they’ve actually been around for centuries and aren’t used in music nearly as much as they used to be. In the 17th and 18th centuries, it was common for guitars to have only four or five strings, and out of necessity different tunings were used to provide various musical functions. The way we typically tune guitars with six strings, which is called standard tuning, didn’t come into prominence until much later.

How to tune your guitar for Drop D tuning

One of the reasons Drop D tuning is so popular is because it’s incredibly easy to tune down to. If you’re sure your guitar is tuned properly, you can learn to get into this tuning by ear by plucking the 6th open E string and the 4th open D string at the same time. Slowly turn the E string’s tuning peg down until the sustained pitch matches the D string. What you’ll eventually get is a pitch on the 6th string that’s a full octave lower than the D string. This might be somewhat difficult at first, but you’ll get better with practice. If you want to make sure you’re absolutely 100% in tune, you’ll need a special guitar tuning device or smartphone app for that.

This sort of tuning will give you access to a ton of new chords, but most the shapes you’ve memorized in standard tuning won’t work when your 6th string is tuned down to D. Some chord shapes are somewhat difficult to master in this tuning, but things like power chords are actually much easier to play in Drop D. Power chords in standard tuning in the outside shape (the shape built off the 6th string) are built with a shape that spans the distance of three frets. For new players, these shapes can be difficult to master, especially if they’re played down on the lower, larger frets.

But outside power chord shapes in Drop D tuning are much easier to master because the lowered tuning allows the fret to be played on one single fret. Most guitarists play this power chord shape by pressing down the strings with a partial bar (half an index finger), but it can also easily be played with the index, middle and ring fingers.

Because this shape is so easy to play, it allows guitarists to move the shape from fret to fret at lightning speed. And unlike in standard tuning, the open string shape is a chord in itself––an open D power chord to be precise––so players often take advantage of that by switching from the open shape to others up the neck at a rapid pace. This sort of playing is commonly found in metal music, but you can find examples of Drop D tuning in most genres. The inside power chord shape won’t change because it doesn’t rely on the altered 6th string like the outside one does.

E minor is a basic example but there’s endless options for new ways to play extended chords and ones with interesting note inversions. As a guitar player, having access to everything Drop D tuning can give you is a wonderful thing. 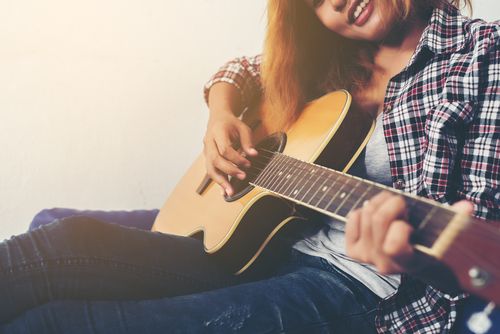 The best way to master material in this tuning is to play in it as much as possible. You can look up ways to play more shapes in Drop D online, but figuring out what sounds good and what doesn’t through trial and error is a good way to get started. Record yourself playing and write down which shapes sound the best. For more helpful articles about the world of music, check out the Musika Lessons blog.

How To Tune A Guitar