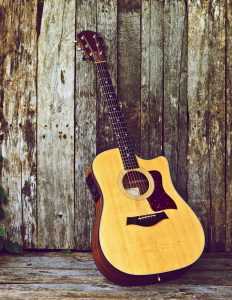 This blog entry will give lessons on how to play four classic American songs on the guitar.  Three are rock songs and one is a country tune. It is important to keep in mind that while these four songs are technically easy to play, making them great beginner guitar songs, it is the interplay of lots of melody and rhythmic subtleties that have made these songs remembered for decades.  Since the guitar parts are fairly simple to master you should have sonic attention available to listen to the interaction of all the instruments and try to hear how these musicians created such a simple, memorable sound.

This tune has only three chords and a basic country rhythm technique, making it a great place to jump into our beginner guitar songs. The song begins on A major and has alternating bass notes. This means on the first downbeat you play an open A string, then on the upbeat you strum the chord. On the second downbeat you play an open E string then strum the chord on the upbeat.

Repeat this rhythm pattern, of alternating bass notes and chord strumming throughout the entire song. As the slide guitar intro ends and the singing begins you should have landed on a D major chord. This time the open D and the open A strings will be your bass notes.

As Hank takes a quick pause in the melody you will be back on the A major. When the next lyrical line is over come back to D major and when the vocals come to the loud note that Hank holds out play a G major. The low G note and B note will be your bass notes for this chord. As the next line starts come back to A major. Then, as Hank sings the word “heart” land back on D major. This pattern continues throughout the whole song. It is important to note that many songs have been written with only D, G, and A chords, but with different patterns and melodic elements to give them all their own personality.

Fell in Love With a Girl- The White Stripes

The Rolling Stones- The Last Time

This song is another tune that only uses three chords, another great thing for beginner guitar songs. For all the verses and guitar solo play an E Major for a full measure then a D Major and an A Major each for a half measure. The choruses (starting with the words “this could be the last time”) start with an A Major, then when the line beginning with “maybe” hits switch to D Major and as Mick gets low and the last word of the chorus, “know”, comes play A major. After the chorus it immediately goes back to the verse. There’s no specific rhythm for your strumming pattern on this one, it’s more of a song with a bit of a spontaneous rhythm. See the attached tablature and sheet music for learning how to play the lead lines. 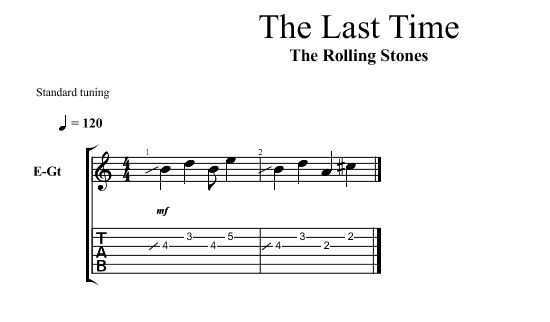 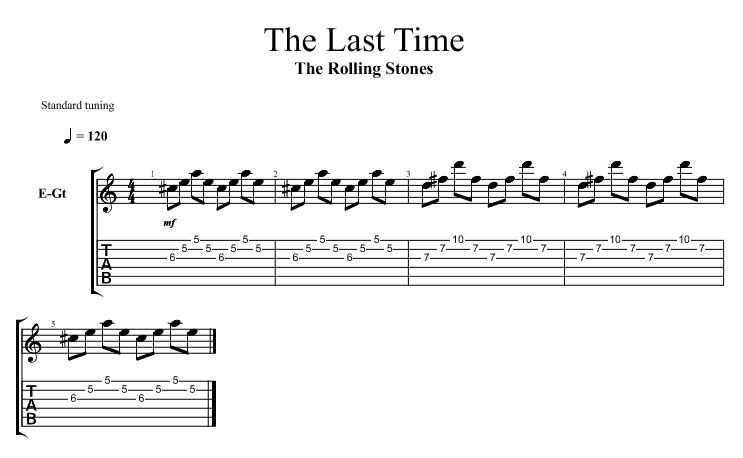 Here’s another deceptively simple song that sinks in your subconscious with catchy hooks and musical secrets from crafty dudes. To begin with this song is played with a guitar tuned down a half step. You can play the chords in standard tuning, but the only way to get the lead line to sound right is by tuning down a half step (see the attached tab and sheet music for this lead line as well). The majority of the song is three chords: F#, B, C# then back to B (remember that if your guitar is tuned down a half step play these chords starting on the third fret). Each chord is played for a half measure. In the beginning of the song each chord is played as a full chord then for the chorus kick on the distortion and play F#, B, C#, and C# power chords. As the verse comes back in, switch off distortion. There is a bridge with a guitar solo and for this part the rhythm guitar plays: A, D, E, D power chords. The chorus then comes back to the F#, B, C#, B power chords and this time there is a variation. Split the last B power chord with an A power chord, each for a quarter note. 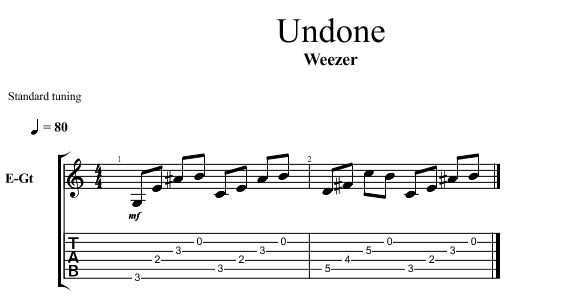 So there you have it. These are four classic, fairly simple beginner guitar songs that showcase a variety of technique and can teach you the valuable skill of listening to the other instruments instead of listening to your playing.

Michael L. is a classically trained and professional musician who has worn many different musical hats over the years. He has studied traditional music all over the world and blends world music with contemporary, experimental sounds. He believes listening and being adaptable to an individual student's needs are the keys to teaching anyone to express themselves through music. His Musika teaching profile can be found here