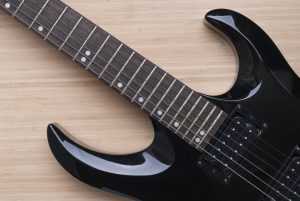 Without a doubt, the guitar is the most popular instrument on the planet. Things like portability, approachability, and its versatile nature as far as sound and styles go has made the guitar a favorite for nearly a century among pop and classical musicians in virtually every genre. Guitar students who might not yet be familiar with their instrument often struggle with understanding what exactly the guitar can do, especially as far as rhythm guitar vs lead guitar playing goes. Today, we’re going to walk you through the differences between rhythm and lead guitar playing, but first let’s talk about what the guitar is and where it came from.

Origins of the Guitar

A guitar is loosely defined as any instrument that features strings suspended over a hollow or solid plastic or wooden box. Guitars now come in all sorts of shapes and sizes and can include anywhere between 6-16 strings. Guitars can be defined as acoustic, which refers to a guitar that relies on its hollow construction, or electric, which refers to guitars that rely on electronic amplifiers for projection. All guitars are played by holding down notes with one hand and plucking and strumming strings with the other. Classical guitars feature acoustic projection, a body shape larger than typical acoustic guitars, and nylon strings.

Guitars, which are also known as chordophones, were developed in Europe at the beginning of the 12th century, but ancient paintings as old as 4,000 years old depict musicians playing instruments that look similar to a modern day guitar. There is no way that we can pinpoint when the guitar was invented within the context of history, but it’s safe to say that musicians from every corner of the globe have been playing some variation of the instrument for thousands of years.

The word “guitar” was adopted from the Spanish word “guitarra”, a word which finds its origins leading all the way back to Ancient Greece. Two instruments are typically credited for developing the modern guitar: the lute and the oud. Guitars as we know them began showing up in Spain in 1200. Early guitars featured a rounded back, wide fretboard, and several sound-holes.

In 2016, there are few places on the planet where you wouldn’t be able to find a musician with a guitar. Although the classical guitar still plays a significant role within art and classical music styles, pop music featuring electric guitars are credited for giving the guitar its widespread appeal and notoriety. Pop musicians have been manipulating the sound of the electric guitar with innovative technologies for over 50 years, and the captivating results continue to make music created with the guitar fresh, interesting, and progressive. 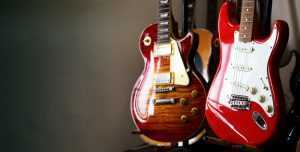 Musicians that play rhythm guitar also help provide or support the harmonic material within a song. A song’s chords serve as a foundation from which melody can stand on. Without rhythm guitar players, you wouldn’t have chords for singers to sing melodies over.

Lead guitarists are responsible for playing ornamental melodic material within a song. This includes melody lines, instrumental fill passages, guitar solos, and occasionally some riffs within a song structure. Any time you hear a guitar playing a discernible melody, that’s lead guitar playing. Many people have the misconception that lead guitar players strictly play flashy guitar solos, but that couldn’t be further from the truth. 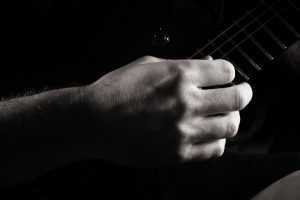 There’s a bit of a grey area when discussing rhythm guitar vs lead guitar playing, particularly when it comes to the punk genre where power chords are often interpreted as being both rhythm and lead. Power chords are condensed versions of normal chords, and feature the root and 5th note of a chord. Power chords move and shift quickly like material found in lead guitar playing, but they also provide the rhythmic harmonic content of a song.

Fingerpicking guitar styles typically bridge the gap between rhythm guitar vs lead guitar playing. This is because music played in this style often shifts between chords and melodies being played. The intro of the Beatles song “Across The Universe” is a good example of a lead guitar part that shifts into a rhythm because it starts out with a harmonized riff and ends with chords.

Where You Fit In

You might be asking yourself, “What kind of guitar player should I be?” right now and weighing your options of rhythm guitar vs lead guitar. There are benefits and challenges that come with playing in rhythm and lead guitar styles, and there’s no reason why a student couldn’t learn how to play in both styles. Typically, young students veer toward learning flashier lead guitar parts, but this leaves them at risk for missing out on playing the chords and shapes needed in rhythm guitar playing. A teacher worth their salt will give their guitar students the tools and knowledge to be able to play in both styles. Exclusively focusing on just one style will deprive a student of valuable playing prowess and music theory experience.

For complete beginners wanting to learn how to play lead guitar, I recommend starting by learning how to play a simple chromatic major scale to a strict rhythm provided by a metronome. Being able to play on beat is an essential skill for lead guitar players. For this scale, start by playing the 6th string open and then play the 1st, 2nd, 3rd and 4th frets with your left hand index, middle, ring and pinky fingers. Repeat this process on each string until you reach the 1st string 4th fret, and then come down the neck of the guitar doing everything you just did but in reverse. If you’re playing this scale correctly, your left hand will remain in the same position during the entire scale. This is a great way for guitar students to build up strength, dexterity, and flexibility in their left hand. 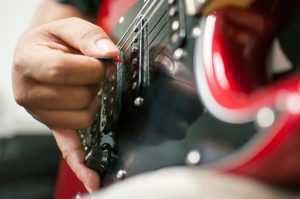 Learning how to play everything from simple pentatonic scales to 3-octave major and minor scales is a good idea for students wanting to learn how to play lead guitar. It’s hugely important that students learning these scales use alternate picking in their right hand. Alternate picking is the motion of picking a note down and then up with the right hand. It’s usually easier for students to only pick notes up or down, but this is a bad habit that should be fixed as soon as possible. When you pick only one direction, the energy and motion it takes to get back into position to pick the same direction again gets wasted.

Alternate picking harnesses that energy and momentum. When teaching alternate picking to my students, I usually bring up a basketball analogy. For people not familiar with the sport, it’s easy at first to do granny shots, but if you did that in a real game with real players you’d never get make a shot. Learning how to play correctly as soon as possible will keep students from forming bad habits down the line.

Arpeggios are also a great way for students to develop their lead guitar playing prowess. Rather than taking the rhythm guitar playing approach by strumming chords, arpeggios are notes from a chord that are played individually and in quick succession. 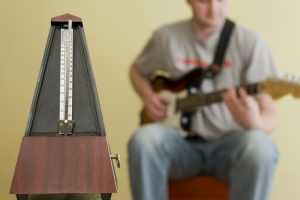 Having an extensive knowledge of chords and shapes is essential for any student wanting to become a proficient rhythm guitar player. Mastering transitions with simple chords in the first position such as Em and D is the first step, which should be followed by mastery of bar and extended chords up the neck of the guitar. No matter how challenging the chords might be to play, I highly recommend practicing transitioning from chord to chord in a very slow rhythm set to a metronome. Rhythm guitar players should take every opportunity they can to hone the skill of strumming and switching chords to a strict beat.

Learning how to play the guitar can be an amazing experience no matter what sort of style you pursue. It’s a good idea not to spend too much time thinking about the pros and cons of rhythm guitar vs lead guitar playing because the guitar is an instrument packed to the brim with musical possibilities, and it shouldn’t be narrowed down into two oversimplified categories. The best guitarists have an excellent grasp of rhythm and lead guitar playing.

What is the Best Age to Start Guitar Lessons?