Here is a great song for the beginning guitarist!

I have included two different strumming patterns in this guitar lesson so you can mix it up a little bit. The first one is a bit more advanced and it matches the guitar part on the original recording. You need to really watch your right hand technique for this picking pattern. It requires you to use alternate picking in the right hand. To do do this, you will be creating an arpeggio for each chord with the pattern I’ve laid out for you in the tabs below.

The second one is just a basic strumming pattern that is the same through out the whole tune. The first strum is a quarter note followed by an eighth note rest and then eighth note strums for the rest of each measure. So the pattern is-

The symbols below the staff line are your pick direction. So, watch them carefully!

This is a great tune to learn for many reasons.

1) It’s an easy 3 chord song that you can get lost in once you have the strum pattern down and you’re able to fall into the groove.

2) Once you master the strumming pattern you can take a crack at learning the picking part which isn’t overwhelming for a beginner but will be a nice challenge that will help you become accurate with your right hand, this is a skill that will be used again and again as you progress in your playing.

3) Whenyou are able to play the rhythm and the well from memory, which won’t take to long, I would recommend trying to sing along with the tune if you already haven’t begun singing and playing the guitar. Tunes like “Simple Man” are good ones to start singing while playing because the vocals match the rhythm quite nicely.

Learning to sing and play guitar at the same time

Singing and playing the guitar together is no easy feat! Most people will not get it down easily, not the first time they try anyway, but if you really work hard at getting the strumming pattern to a point where you are operating from muscle memory then singing will become a bit easier. I strongly encourage trying to sing and play as much as you get once your familiar with songs as I feel it makes playing guitar even more fun than it already is!

Alright, it’s all right there in front of you. Print out the tabs and start playing and remember to have fun! 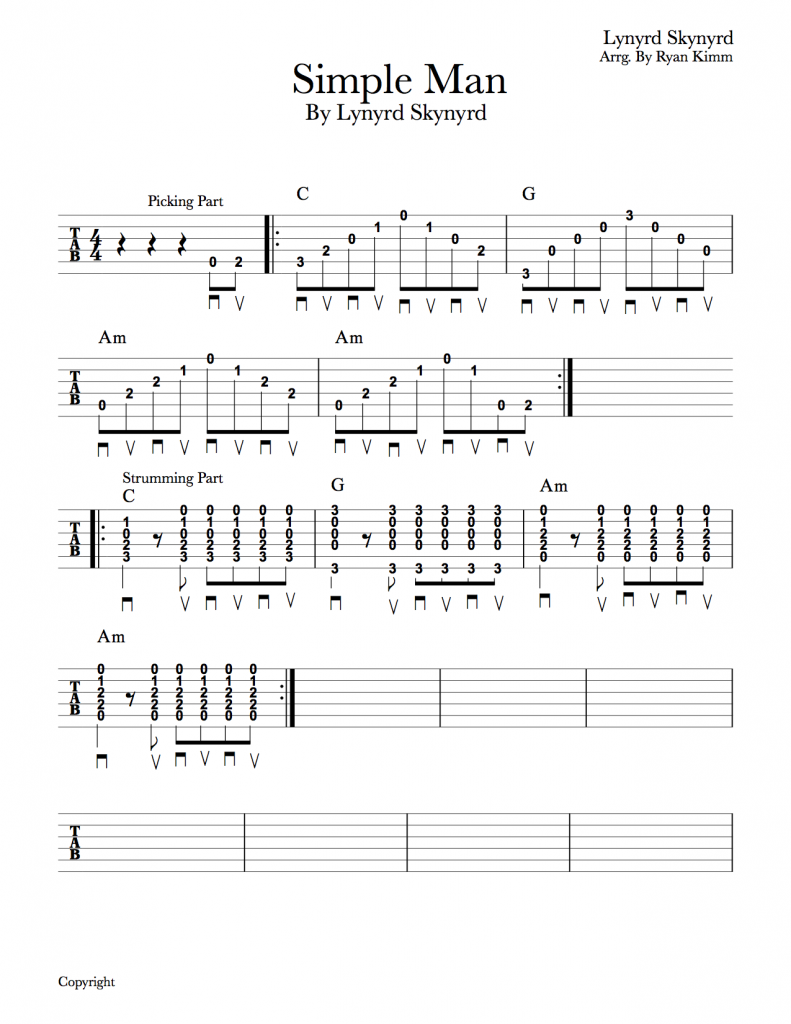