Bluegrass is a music with a long and storied history, starting with the first immigrants to settle in the Appalachian mountains. An aspect of that history that is being explored more and more frequently, as modern bands seek to expand the sound to its fullest, is the use of the accordion. 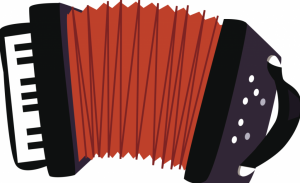 This use of the accordion is not due to modern musicians looking to experiment just for the sake of experimenting. The first Bluegrass

band, Bill Monroe and The Blue Grass Boys, had an accordion player in their band during early iterations of their group, but settled on not having one just before rising to fame.

The accordion is a rather unique type of instrument. The keys make it look like a portable piano, the squeezing aspect is reminiscent of the Scottish bagpipes and the sound is like that of a reeded instrument, like the harmonica. All of these different features coming together make for a unique sound that can lend itself very well to all types of folk music – hence the initial interest by Bill Monroe.

How you play it is by either compressing or expanding the bellows to move air over the reeds inside the instrument. The air is turned into sound by the reeds when they vibrate. The precise control of which reeds will vibrate creates the chords and notes of the piece of music being played. How these chords and notes are selected are by means of the keys on either side of the instrument.

The right hand side keys of the accordion are reserved for the melody and treble notes. The left hand is usually for the bass notes and preset chords. Pressing a certain key allows air to go across the reed associated with the note or chord and causes it to vibrate.

The use of the accordion in Bluegrass

As noted, The Blue Grass Boys used an accordion very early in their formation as they experimented with their sound. They went through numerous lineup changes during their formation before finally settling on an all stringed instrument arrangement.

This experimentation has lead to modern Bluegrass bands also taking the time to experiment and this has brought the accordion back into Bluegrass. It is a common instrument in folk music, and Bluegrass has long been a collaborative style of music with people from all over jazz, blues and even orchestral musicians participating.

The use of the accordion in Bluegrass has lead some purists to call it ‘NewGrass’ or ‘Progressive Bluegrass,’ but in the end music is meant to grow. Why can’t it grow to include a fuller understanding of its own history and still maintain its name and character?

It is of this writers opinion that you can take the traditional Bluegrass lineup – mandolin, upright bass, acoustic guitar, banjo and fiddle and add a little bit of another non-electric powered instrument and still be Bluegrass. Bill Monroe gave it a shot once, you can as well and you can create some exciting music.