As you first start out playing guitar, one of the greatest difficulties that new players have is changing between many different chords. It takes a long time and a great deal of practice to get your fingers to the point where they can move quickly and smoothly between any variety of guitar chords. As you develop the required muscle memory, a great source of frustration is not knowing how to play a song all the way through, from start to finish. Most songs have multiple sections with many different chord changes that can make it difficult for new players to get beyond the introduction. Fortunately, there are plenty of great 2 chord songs that will make it much easier for new players to practice their finger movements and muscle memory, while playing an entire song through, from start to finish. 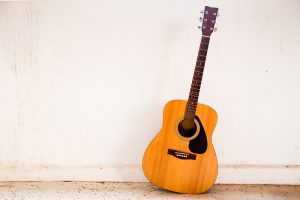 There is a great sense of satisfaction when you learn to play a song all the way through, from start to finish. It’s this experience that makes playing guitar worth the hours and hours of practice and effort, and learning some 2 chord songs as you start out is the best way to gain this experience. There is also a level of stamina that needs to be acquired and developed, in order to maintain smooth chord transitions and strumming through a whole song.

To help you develop and practice your chord changes and strumming skills, we’ve put together a great list of 2 chord songs that are all very easy to learn. Learning these very simple tunes and practicing them until you can play them all the way through is your next step to becoming a skilled guitarist who can play anything.

Each of these songs offer a different set of chords to move between, allowing you to practice transitioning from nearly every chord combination possible. These songs are all in a variety of genres and styles, so whatever your music preference is there are 2 chord songs for you to learn. Once you’ve mastered this list of easy to play tunes, you’ll have no problem transitioning to playing 3chord songs and even more complex ones.

Bruce Springsteen’s 1984 hit song, “Born In The USA”, is one of the easiest 2 chord songs you can possibly learn on guitar. It’s a great option for beginners who are trying to decide on what should be their first song to learn. It’s also a simple song to sing as well, so if you are working toward singing while playing, this is a perfect beginner option. The entire song transitions between the B major and E major chords, and learning the song is a breeze, even for the most novice guitar players. Also, the song is widely known, so it makes for a great sing-along tune.

As a general rule, reggae music is fairly simple to play, and it makes for a great starting point for new and aspiring guitarists. “Lively Up Yourself” by Bob Marley is no exception to this. This fun and upbeat tune from the most widely loved reggae musician of all time is a great song for beginners to learn, and with a little practice you will have the hang of it in no time. The song transitions between the D major and G major chords, which are two of the most common and versatile chords across all genres of guitar playing. This 2 chord song is a fantastic introduction to these chords.

Billy Ray Cyrus’s early 90’s hit song, “Achy Breaky Heart” was an international sensation, and the song is known by pretty much everyone. The country tune is one of the easiest 2 chord songs that you can learn to play on the guitar, and it’s a fun tune to play around campfires or at parties, because nearly everyone knows the words. This is a great place to start, particularly if you’re a fan of country music, and the song is so easy you’ll have it mastered in no time. It makes a simple transition between the C major and G major chords, which are two of the most important chords in country, folk, rock, and pop music. Learning these two chords will open the doors for you to play a wide range of songs in all different style and genres.

Peaking at number six on the alternative rock charts, the late 80’s hit “Jane Says” is one of the most widely loved popular songs of the late 80’s and early 90’s. The alternative rock movement and style during this time was dominated by very simplistic songwriting and guitar playing, and because of this many of the songs of this era are great starting points for novice guitarists. The simple progression from A major to G major in this song makes for an easy practice for any guitarist. This is also an easy and fun song to learn to sing over your guitar playing, and the vocal melody is simplistic and repetitive.

Nirvana’s crooning and sad dirge, “Something In The Way”, introduces a much less commonly utilized chord, F# minor. While it’s one of Nirvana’s lesser known tunes, it’s still a favorite among fans of the band, and it’s a beautiful song to learn and play on guitar. The song is played very slowly, so if you haven’t quite gotten the hang of strumming smoothly, this song makes for a perfect practice. This is also a great song to experiment with fingerpicking, thanks to its slow, somber style. If you aren’t an excellent singer, this is also an excellent song to learn how to sing to, as the vocal melody is very slow and easy.

Robin Thicke’s hit sensation, “Blurred Lines,” took radios by storm upon its release. While the original song is not a guitar centric tune, the melody makes for a great acoustic cover, and it’s an incredibly simple song to play. Utilizing the common and versatile D – G chord progression, mastering this song will allow you to play many more tunes. The strumming throughout the song is easily learned, and it’s a fun song to learn how to sing along to, as well. This song is also a great option to learn, because pretty much anywhere you play it, people will be familiar with it.

The Beatles’ 1966 hit, “Paperback Writer” is more known for its fun guitar riff than for its chord progression, but for our purposes it is an incredibly easy beginner song. This song introduces the E minor chord, which has a much more dissonant and melancholy sound than most of the other chords on this list. That said, the chord is incredibly versatile, and is heavily utilized in classic rock and blues chord progressions. Also, the E minor chord is the most versatile chord with all of the other major ones that you are learning.

Like “Paperback Writer”, “Break On Through” makes heavy use of the E minor chord. However, in the song it follows a D major rather than a C major chord. If you learn both of these songs it will help you begin to learn how chords interact with each other and how different combinations of chords can have greatly different tones and moods. This is another song with a great deal of energy, which makes for a fun learning experience.

This other popular Beatles’ tune is just as easy to play as “Paperback Writer”, and it even uses the exact same two chords. If you learn one of these songs, you’ll already know how to play the other. Learning both of these two chord songs will help you along in learning how two songs with the exact same chords can still sound quite different from each other. When you learn these songs, consider playing them back-to-back so that you can really hear the difference in how they sound.

Surely, with this list of 2 chord songs, you’ll have no problem building up a repertoire of tunes that you can easily play through. With just a little practice, any aspiring guitarist can have all of these songs learned. The more you play these songs, the faster you will improve, and you will be that much closer to playing three and four chord songs in no time.