If you’re new to the guitar and want to figure out how to get started, you might feel everything from curious to downright confused when you hold your instrument. Whether you’re learning electric, acoustic or classical guitar, the guitar can be an intimidating instrument for students of every age. But what you might not realize yet if you’re a beginner is that there’s a few simple guitar hacks we can master that will make understanding and playing this instrument a whole lot easier. In this article, we’ll walk you through some easy things to memorize that will completely change the way you play. Ready to get started? Here’s what you’ll need:

-Some sort of guitar––electric, acoustic or classical

-A metronome. These are devices that produce adjustable beats we can practice to. Spoiler alert: all the guitar hacks we’ve got for you can and should be practiced to the consistent beat of a metronome. None of the skills you develop as a player will mean much if you can’t play in rhythm. Your local music store will have tons of metronome options, and there’s tons of cheap or free metronome apps you can download straight to your smartphone.

-A pencil and paper or printer. You’ll need to write down or print the visuals in this article. 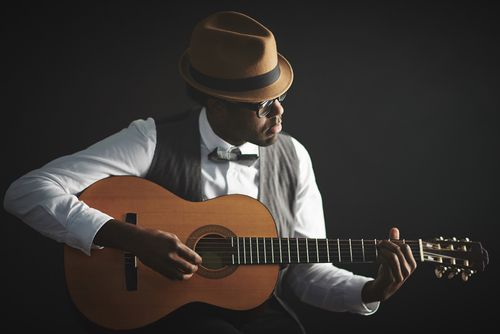 What makes the guitar so “hackable”

Though the term is pretty new, a “hack” is generally defined as an actionable shortcut someone can use to make life easier. There’s plenty of guitar hacks out there, but before you can put them to work, you’ll need to master the most basic skills on the guitar––basic guitar terminology, pressing down frets hard enough to produce tones and a general knowledge of what strings are and how to strum them.

What makes the guitar, and all other stringed instruments, so hackable is the fact that certain chord shapes, riffs and scales that don’t rely on open strings can be learned once and moved to any other spot on the guitar. This means that huge swaths of information only have to be learned once on the guitar before they can be applied to virtually any other key on the instrument. That’s quite a hack, right? The guitar becomes significantly less intimidating once you realize that tons of its playing options only need to be mastered in one spot before they can be applied to other frets.

An example of where this doesn’t apply is for the basic chords and scales you probably learned in your first few guitar lessons. For example, the good old easy open E minor chord can’t be moved to other locations on the guitar because it features open strings. You can move the part of the chord your fingers press down, but the open notes you strum will stay the same. In order to hack chords on the guitar, you’ll have to work with ones that don’t rely on open strings.

Unlike open chords, barchords are chords where your index finger presses down all the strings on a single fret. If you’re familiar with what capos do, your index here is essentially doing the same thing here. By learning just a few barchord shapes, you’ll be able to play basic chords anywhere on the guitar and in any key. Yes, these chords can be sort of challenging to play for some people, but the advantages here are massive for anyone wanting to take the guitar seriously. We’ll show you how to play four barchord shapes here: two major shapes and two minor shapes: 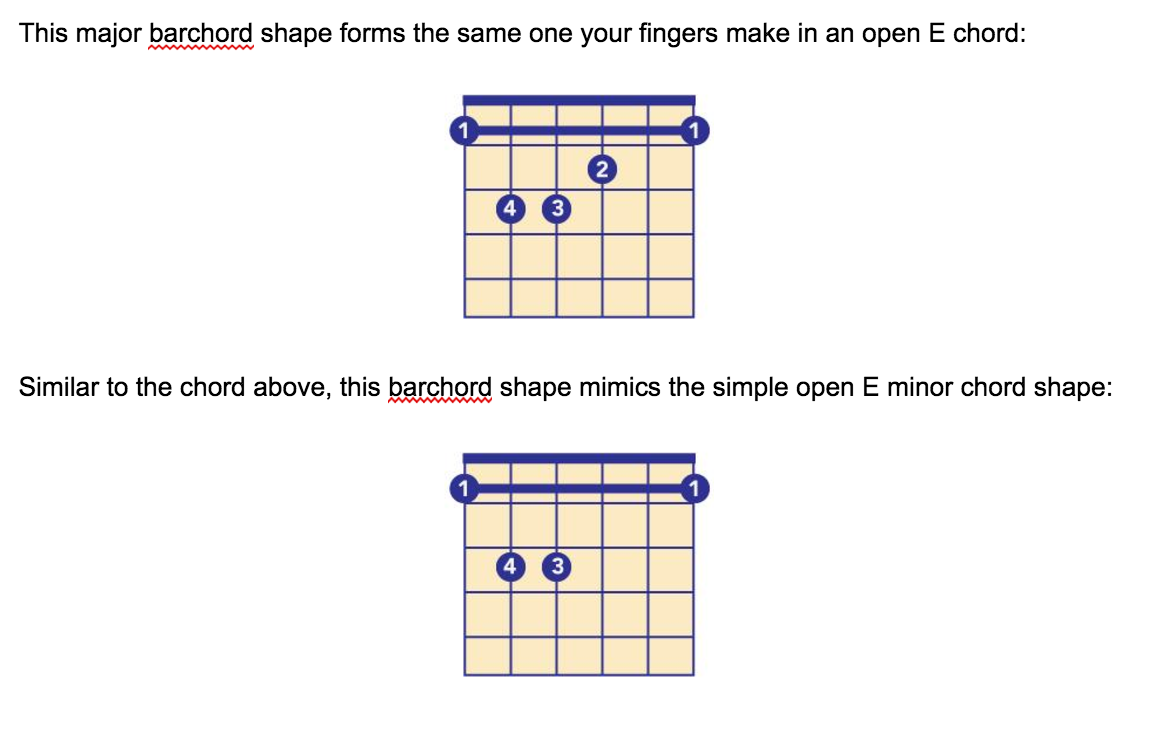 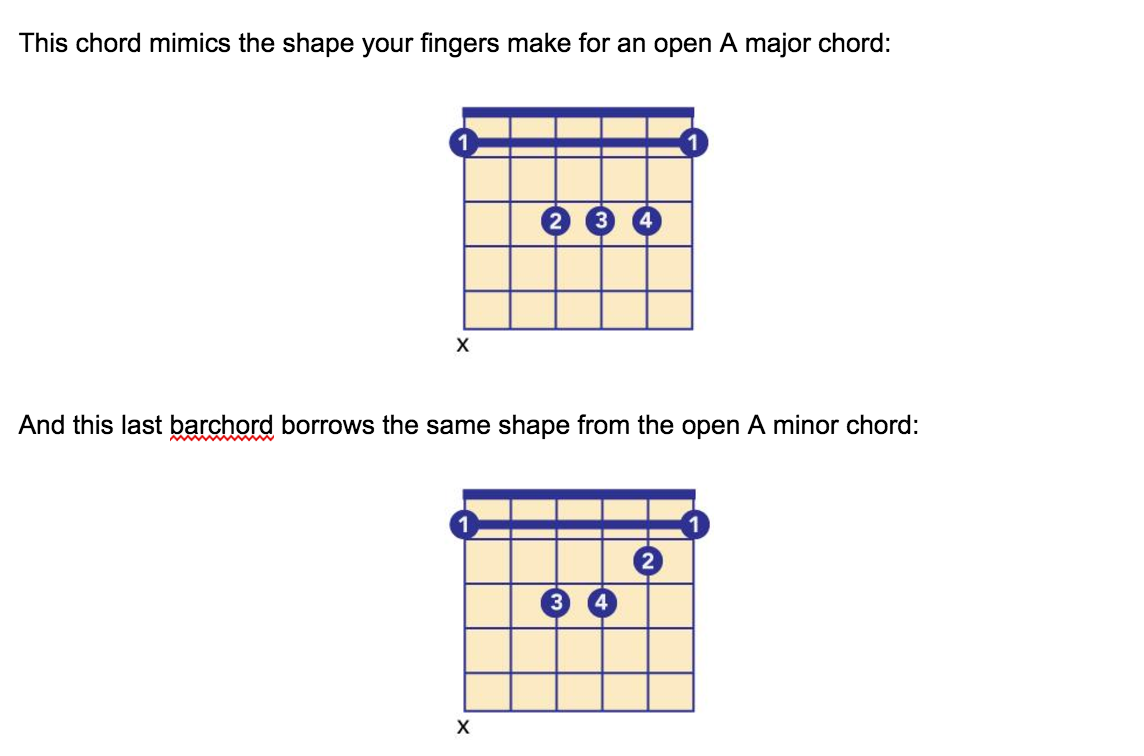 Partial barchords work in a similar way that barchords do, but they sometimes rely on open notes. You can move partial barchords to other frets and keys, but you won’t be able to play any open strings in the chords you move. If the full barchord is still too much of a stretch, you can also experiment with barring only the higher strings while muting the lower bass strings. The chord is less full and complete, but often times you can get away with this technique. Consider it a hack of guitar hacks!

In your first few guitar lessons, you might’ve learned a basic E minor pentatonic scale or a simple version of a C major scale. Most likely, the scales you learned had open strings, so you won’t be able to move them to other spots on the guitar. But the good news is that we can learn a few super simple closed scale shapes that can easily be moved to other frets on the guitar.

You can use closed scale shapes to do everything from writing and improvising to gaining a better understanding of how music theory works. Having a good grasp of scales is essential if you’re interested in playing riffs and solos. We’ll introduce you to some simple one-octave basic scale shapes, but what you learn here can be adapted and stretched out into two or more octaves. 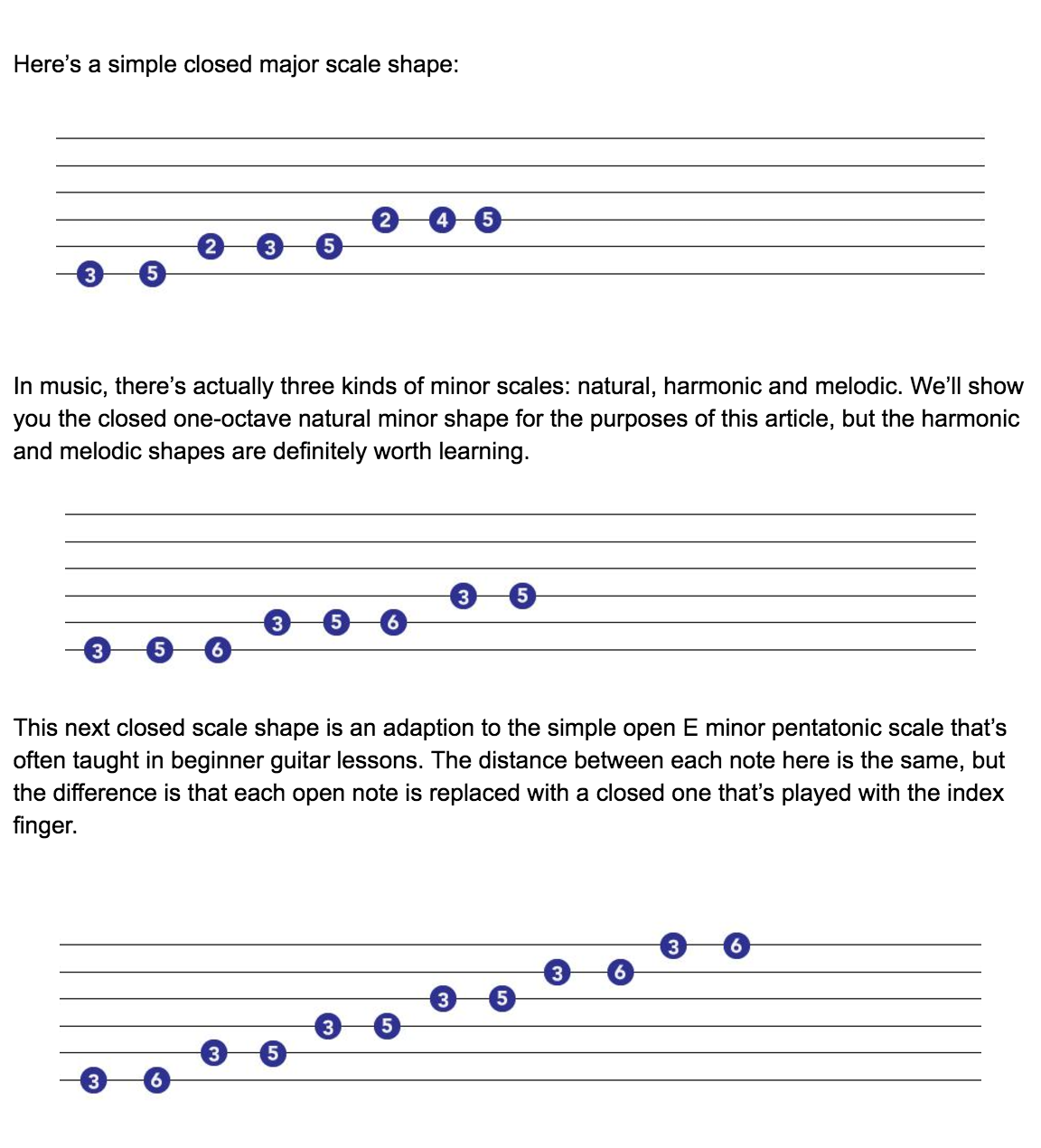 Take a good amount of time moving these scales and barchords to various spots around the guitar. You could, and probably should, create drills to help you nail down the transitions between chords and scale shapes. For example, using a metronome, practice switching from chord to chord on each fret without pausing. Starting at the 12th fret, practice the drill until you reach the bottom of the guitar. And a side note here, because the higher frets are closer together, starting a barchord drill high up the neck will be easier than beginning down at the bottom. Try this same sort of drill with the scale shapes you’ve learned as well.

When you begin to move the shapes around the neck of the guitar, make sure you note which key you’re moving your chords and scales to. For the guitar hacks we’ve just showed you, this means that you’ll need to memorize all the notes on the guitar’s 5th and 6th strings. 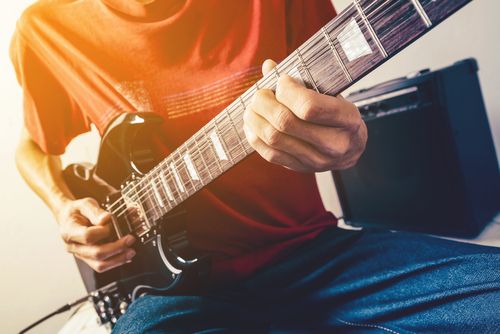 No matter what style you’re playing in, the way you pick individual notes on the guitar has a profound impact on the sounds you produce. Getting in the habit of employing a simple alternate picking technique will make your life infinitely easier as a guitarist. Alternate picking is the technique of alternating between picking up and then down. It sounds simple, but this is one of the more important guitar hacks out there because newbies often have a bad habit of picking in only one direction when they play riffs and scales. Alternate picking harnesses the natural momentum your picking hand generates when it picks. When you pick in the downward direction, your hand naturally has to move upward to get in the downward picking direction again. Alternate picking simply takes advantage of that motion to pick a note when your hand moves upward.

As a general rule, use this technique any time you play individual notes on the guitar. This includes scales, riffs, solos and many exercises. Picking in only one direction is a horrible habit that’s difficult to break, so add in this important technique into your playing as soon as you can. Like any other endeavor, solid guitar playing is built on efficiencies, and not taking advantage of this technique is hugely inefficient.

This next hack is a musical shortcut because it’s an easy way to condense chords and move them anywhere around the fretboard. Power chords on the guitar are simple, easy to play and have become a staple sound in rock, pop and blues music. Chords on the guitar and in all of music are typically constructed with a note that tells the listener that what they’re hearing is major, minor, diminished or augmented. But powerchords lack this defining note, so when we play them we’re left with thick, hollow-sounding chords that are neither major, minor, diminished or augmented.

Like barchords, power chords are going to be slightly easier when they’re played higher up the neck, so if you’re having trouble getting a good sound with these, try playing them up higher on the fretboard. Using your trusty metronome, create your own power chord dril. You could start on the 12th fret with the outside power chord (the one built on the sixth string), move on to that fret’s inside power chord (the one on the fifth string) and repeat that sequence all the way down until you reach the bottom of the fretboard. Practicing with a drill like this is great if you’re having trouble playing the lower power chords because it introduces them gradually.

Having a solid grasp of chords found in common keys will help you no matter what your guitar goals are. Whether you want to play rock, folk, pop or blues, having a basic knowledge of how to play chords is absolutely essential. But while many guitarists memorize a few simple chords, they don’t usually bother to learn all the chords found in common keys. Taking some extra time to learn all the chords from a key in music will help you not only learn more important chords, but it will also give you a better idea of how chords work in music. Essentially, playing all the chords of a key in order is like playing a beefed up version of a scale.

We’ll show how to play all the chords in the key of C major, one of the most common keys found in guitar music. With your metronome, work towards being able to play each chord in order and rhythm without pausing. When you’re comfortable, use the chords in this key to create your own chord progressions so you can master the transitions between the key’s different chords. 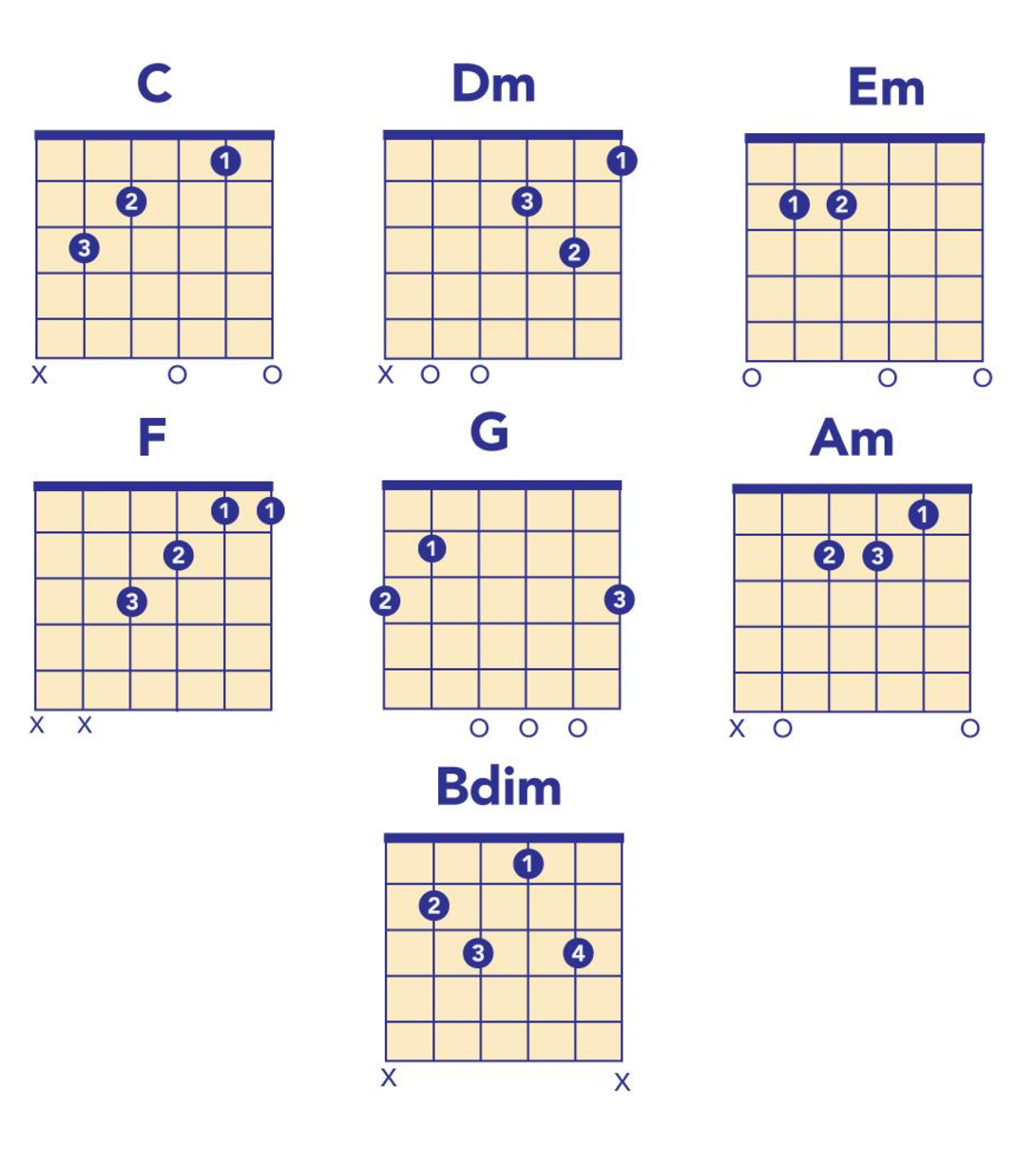 Like we mentioned before, none of these powerful guitar hacks will mean much if you haven’t already built a strong guitar playing foundation already. Things like playing in rhythm and knowing how to press your fingers down on the guitar are essential if you want any of these tips and exercises to work. If you haven’t already done so, get in the habit of practicing your instrument at least three times a week for thirty minutes. The only way to master basic skills on the guitar is to physical hold and play your instrument frequent enough for your body to get used to playing. Muscle memory, which is the idea of your body remembering what to do, has to be developed before you’ll be able to play and thrive on the guitar. If you need extra help learning how to play, it’s always a good idea to learn from an experienced, patient teacher. Nothing can replace the guidance you’ll get by learning from an excellent teacher. For more helpful articles about the world of music, check out what else we’ve got posted on the Musika Lessons blog. 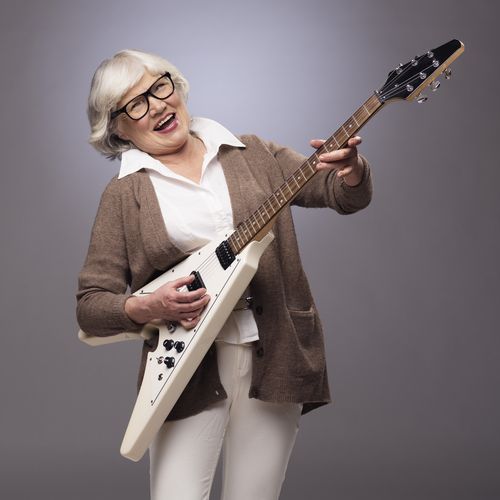