If you recently started playing, learning minor scales for guitar probably isn’t very high on your list of priorities, but it should be. In case you haven’t heard, scales of every quality, major, minor, blues and pentatonic, are much more important than just acting as simple exercises for your fingers. Scales are a massively important tool used for everything from understanding music theory to providing incredibly helpful insight on how to construct riffs and solos. To put it plainly, if you want to be a serious guitarist, you’re going to want to memorize as many minor scale shapes as you can. In this article, we’ll teach you not only how to play some different minor scales for guitar, but we’ll also tell you why they’re so important to learn. 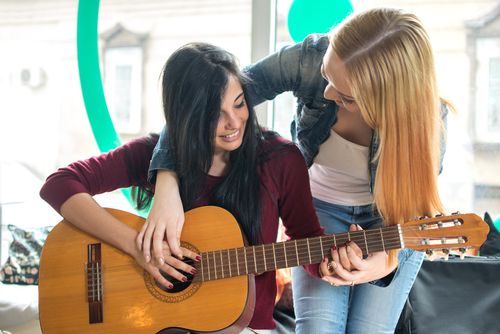 To get this most out of this article, here’s what you’ll need:

-Pencil and paper. To fully internalize the information here, you’re going to want to write down the scale shapes and patterns of notes we show you in this article.

-A metronome. Metronomes are devices that produce audible beats you can practice to. Yes, scales develop the skills of tone, muscle memory and finger placement in a player, but rhythm is also a huge factor in playing scales solidly. If you haven’t already done so, start practicing everything you’ve already learned alongside the click of a metronome.

What are minor scales?

Scales, whether they’re major, minor or any other tonality, are step-by-step sequences of notes that explore a certain musical sound. Also referred to as modes, scales explore the different keys we hear in music. Whether you’re listening to a heavy metal song or one of Mozart’s operas, all the music you’re hearing borrows notes from various scales. In terms of guitar music, all the notes you rely on to build chords, riffs and solos come from scales based in whatever key you happen to be playing in. 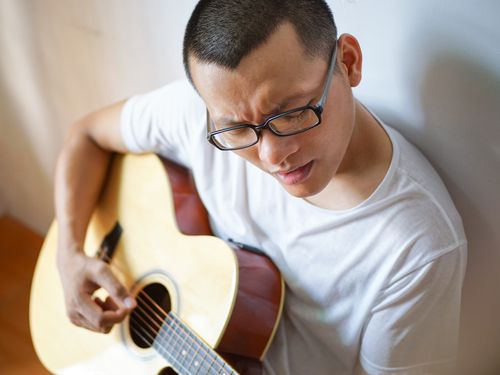 The quality of the scale you’re playing is wholly dependent on its unique pattern of notes. Chords work the same exact way except that their notes are played simultaneously rather than individually. People typically describe minor chords and scales as sounding “sad,” but that oversimplified description does a poor job of describing the minor sound and its vital role in music. Music is much more complicated and nuanced than something that can be simply described as happy and sad. Minor scales and chords are often used to convey everything from reflection to anger.

There’s three basic types of minor scales for guitar that are found in music: natural, harmonic and melodic. Each type of scale sounds completely different and features its own unique set of notes. In not only minor scales but all other types of scales, guitarists have a massive playing advantage over other musicians. Whether it’s scales, chords or riffs, any material on the guitar that doesn’t include open strings can be memorized once and easily moved to other frets (keys) on the guitar. This means that you’ll only have to learn the three basic minor shapes we’re about to show you one time before you can adapt them to any key in music. That’s massively helpful information that will help you whether you’re trying to shred or improvise over some jazz chords. Let’s get to it!

We’ll show you a simple one-octave natural minor scale shape here. Feel free to memorize it on any fret, but when you’ve got a good grasp on how it works, move it to other spots on the guitar. A good way to memorize this scale is to create a drill where you move the scale from fret to fret without pausing. No matter what you do, make sure you practice this scale with a metronome. For natural minor scales, you’ll play the same pattern of notes going up (ascending) and down (descending). 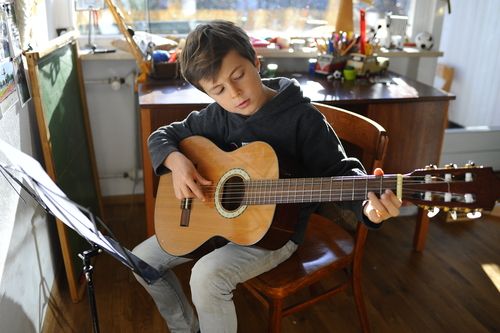 Thoughtful repetition is the best way to memorize anything, and playing these minor scales for guitar over and over again is the best way to solidify the information you’ve learned here. The main idea here is to develop muscle memory, which is the process of your body physically learning a new skill and remembering how to do it again and again to make it easier.

As soon as you can, put your new minor scale guitar knowledge to use by using these scales to improvise and write riffs and solos. If you need extra help playing these scales, we recommend sitting down and learning from an experienced guitar teacher. The right teacher can take your playing to places you never thought it could go, and many teachers in your area will come to your home for lessons. For more articles about the world of music, check out the Musika Lessons blog.

1 thought on “Minor Scales for Guitar”