If you haven’t already learned why scales are important, you might think that they’re not anymore special or important than any other drill or exercise on the bass, but boy would you be wrong. Scales on any instrument are a gateway into the powerful concepts that govern practically all the harmonies we hear in music. But even if you don’t bother learning the music theory side of things, memorizing a few scale shapes will completely alter the way you play the bass in a huge way. In this article, we’ll show you how to play some of the more important bass scales, but first let’s talk a little bit about what scales are and why they’re worth learning. 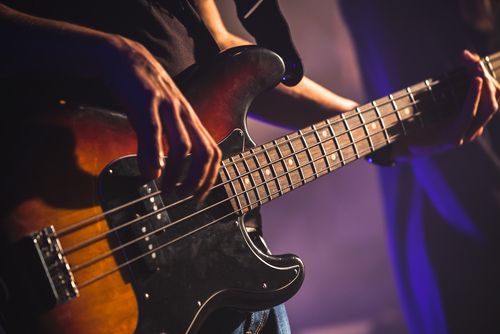 On not only the bass guitar but in all of music, scales are step-by-step sequences of notes that explore different keys, modes and tonalities in music. Like the sounds they explore, every scale sounds completely different and is therefore constructed with different patterns of notes. Luckily for us string players, many of the bass scales we’ll come across are built using no open strings, which means that by memorizing a few simple scale shapes will give us access to scales on notes all over the bass. Musicians who play woodwind or brass instruments, for example, have to learn separate intricate patterns of notes for each scale, so string players have a big advantage here.

All of the melodies we hear in music are built using notes found in scales, and some pieces of music include large pieces or complete scales in their melodies. For example, the famous Christmas carol “Joy To The World” features an entire descending major scale in its opening melody. The notes found in scales also form chords, but us bassists are typically more concerned with bass lines than building chords. We’ll leave that up to guitarists and key players.

Why every bassist should know scales

Memorizing just a few scale shapes will give you the ability to write bass lines, improvise and understand music in a totally different way. When you take the time to memorize bass scales, it gives you more tools in your musical arsenal when you create music by yourself or with other musicians. When you’re playing with a band and someone says, “Hey, I wrote this chord progression in the key of G major. Can you come up with a part?,” you’ll already have ideas and a direction for the something you could potentially play as a part. Why?

Because scales explore keys, and the very same notes you’ll use to play the G major scale are the same notes found in the key as well as the chords found in the key. The same DNA found in basic scales is used to construct the chords and melodies found in music. Yes, music often changes from key to key, but having a comprehensive knowledge of basic scales will help show you what to play and when during a piece of music. And since bassists typically play within conventional styles––pop, rock, folk, blues––the music you’ll be learning scales for typically won’t depart from its original key too often. But if it does, all you’ll have to do is make sure you’re familiar with the key it’s moving to and adjust accordingly. 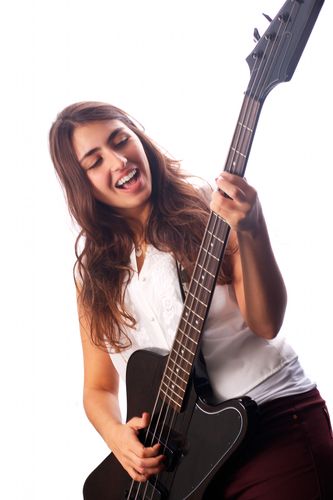 Whether you’re using your fingers or a pick, we recommend using the alternate picking technique when playing these scales. Alternate picking is when your picking hand alternates between up and down when using a pick or middle and index when using your fingers. This technique helps your picking hand to harness and use the natural momentum it creates while picking a line of notes.

And to help you build your rhythm playing skills as you master these scales, we recommend using a metronome to help you memorize these scales. Remember, bassists are rhythm players, and every opportunity is prime for working on our rhythm skills. You won’t be able to apply this powerful scale knowledge to other pieces of music until you’ve mastered these basic scale shapes in rhythm, so don’t skip the metronome.

We’re going to start off by showing you how to play major bass scale shapes. Again, the shapes we’ll show you here don’t feature any open strings, so they can be moved to any fret on the bass. Major scales are a good place to start for a couple of reasons. First off, major chords, scales and keys feature a sound that’s often described as “full” or “complete.” There’s many different versions of major scales we could learn, but we’ll show you the simplest version of the G major scale to get started.

We’ll use bass tabs to show you how to play these scales. In tabs, the lines represent the bass strings and the numbers represent the frets you’ll press your finger down on. If you see a 0, simply play the string it’s placed on as an open string.

Minor scales, chords and keys feature a sound that most people describe as “sad” or “dark,” but those descriptions aren’t completely accurate because minor tonalities are used to do much more than make morose music. Like the major scale shape we just showed you, this version of the minor scale is the bass’ simplest. There are three different minor scales on not just the bass, but in all of music: natural, harmonic minor and melodic minor. We’re showing you the G natural minor scale shape today not only because it’s the most common, but because it’s the harmonic foundation for most of the chords, keys and melodies we hear in popular music. Once you’ve learned this simple natural shape, take some time to memorize the melodic and harmonic minor scales.

You’ll start by playing the fourth string’s third, fifth and sixth frets. Then, on the third string, play the third, fifth and sixth frets as well. And lastly, on the second string, play the third and fifth frets before going back the same way you came until you get back to the third fret of the fourth string. As soon as you memorize these scale shapes, start moving them around to different spots on the bass for practice.

The last scale we have to show you is a bit more complex than major, minor and pentatonic scales, but it’s definitely worth learning. Like we mentioned before, blues music is at the heart of most modern popular music, so getting as familiar as you can with blues material is important if you want to be a serious bassist.

Memorizing these bass scales is good idea, but you shouldn’t stop there. Try putting what you’ve learned into practice by applying these different scale shapes to different pieces of music. And as soon as you’re able, start moving all the scale shapes you’ve learned to other locations on the fretboard. If you need extra help mastering scales or any other material on the bass, we recommend working with an experienced teacher in your area. The right teacher can help give you the tools and expertise you need to master the bass. For more helpful articles about the world of music, check out the Musika Lessons Blog.