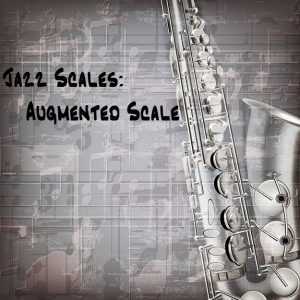 I remember first being introduced to the augmented scale in college and not knowing what to do with it. It’s a weird thing being taught a scale and then being told to figure out how to apply it. Applying the diminished scale, the whole tone scale, the altered scale, the blues scale, etc. is pretty straightforward. The augmented scale is not as clear cut. Maybe this is why it’s not taught so much, or why it’s taught at a later stage in a player’s development.

The augmented scale’s applications aren’t so obvious. Maybe think of it in terms of a scale you’re familiar with. How do you apply the chromatic scale to improvisation? What chord can you play the chromatic scale over? The answer is and isn’t obvious. The chromatic scale can be played anywhere. It can be played in many situations. The augmented scale works in a similar way. You kind of just have to figure out what chords the notes in the scale would work over. We’ve done this with every other scale I’ve written about already. This time, though, maybe not all the notes will completely fit the chord.

Here are a few chords that the augmented scale works over. The first chord is the most obvious. The augmented scale works over an augmented chord. The scale is simply an augmented chord with a leading tone (or note a half step below) preceding each chord tone. The second chord follows the same logic but counts the last note of the scale as a chord tone. The third chord may be a bit confusing to some because the root of the chord is not in the scale. For the minor (Major7) chord, you think of it as the scale starting on the fifth or the seventh of the chord.

These next two examples start to get into pretty advanced concepts, so I won’t go into too much detail. The augmented scale can be used to imply three tonalities at once. If you are in C Major, you can imply C Major, E Major, and Ab Major. Take a look at the C augmented scale. Within the scale, you have all the notes of a Cmaj7 chord, a Emaj7 chord, and an Abmaj7 chord. By weaving in and out of three tonalities, you create tension and release (which I talked about a bit in the article on the altered scale). This concept of implying three tonalities a major third apart was first introduced by John Coltrane in his compositions “Giant Steps”. Like I said, this is starting to get into pretty advanced territory, so I’ll let you explore it on your own, or maybe I’ll write about it in a later article.

This first example focuses on the triads of the three tonalities with a leading tone to the third scale degree. This example also sounds cool as a diminished scale pattern if you use four triads a minor third apart rather than three triads a major third apart.

This third example is the most popular augmented scale pattern. It makes use of the three triads a major third apart.

Applying the augmented scale to improvisation is a trial and error process. But then again, applying any scale to improvisation should be a trial and error process. You shouldn’t just play a diminished scale over a diminished chord because you know that it works there. It should be a sound in your ear; you should know what it’s going to sound like before it comes out. In order to accomplish this, you need to practice a given scale over different chords and in different situations. You should sit at a piano, play a chord, and play a scale in different permutations over that chord. That’s the only way to get a particular sound in your ear. With the augmented scale, this is even more important, as the application isn’t so cut and dried.

This last example just shows the application of the augmented scale in a minor key. Once again, play this chord on the piano and practice the scale to see if it sounds right to your ears.

Hopefully this post has conveyed my enthusiasm for the augmented scale. You probably won’t find yourself using the augmented scale in every solo you take. But, the point of studying all these different scales isn’t only to transform yourself into the greatest improviser of all time. That could be one goal. We study music because it enriches our minds and our lives. I chose to write about the augmented scale because it’s one of those scales that stands out to me as being unique and interesting. Maybe it’s just me. You’ll probably find other scales more interesting. But that’s the thing about music: everyone has different taste and no one’s taste is necessarily bad.