While there are countless different methods to record live music, the principles of recording are universally similar. Recording live music is, to a degree, dependent on what gear is available, and unless you have your own gear, what’s available will vary from venue to venue. But if we take a broad look at the main principles and ways of recording live, then you can fine tune these skills to any recording set-up. 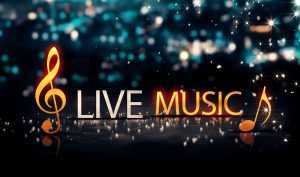 Recording live music can be very tricky because there are always many variables in place, and you only have one chance to get the best recording. But if you’re able to capture a live performance effectively, it’s one of the most useful and effective practices a band can do. Having live recordings are helpful in booking subsequent shows, and live recordings can be sold as a cheaper and easier alternative to a studio album.

The key to ensuring that your live recording is successful is to be adequately prepared beforehand. Many of the difficulties encountered in the recording process can be prevented by being thorough in a sound check and doing your research before the day of the show. It’s important to know all of the gear that the venue has available to use, and whether or not they will have a house engineer who will be helping with the audio for the performance.

If there is a house engineer, he should have all information regarding the setup and use of the house equipment. This will make the set-up for recording easy. If there isn’t a house engineer, then you must be prepared going into the show. Check in advance what gear is available, being sure to check small items such as cables, adapters, and other seldom considered items. If the venue doesn’t have enough of these available, then you must provide your own, being sure to have extras in case of equipment failure.

It is also helpful to have a general understanding of the operation of all equipment and house gear that the venue uses. Countless hours can be wasted trying to fiddle around with gear, when a quick review of the operation manual beforehand could prevent this. 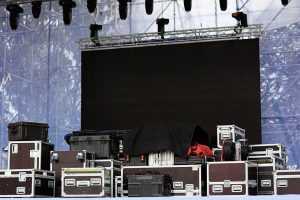 If the venue does not have the means to record and they only have a PA system, then you will need to bring your own means of recording. There are many different systems available to record music from a live show—most of them are surprisingly easy to use, so long as the audio is already run through a house system.

Essentially, to record, all you have to do is split the audio from the house soundboard, and run it into an audio recording device. The audio should already be mixed for the live sound, however, because of the room’s acoustics, this might translate differently in the venue itself from the recording. If this is the case, it might be helpful to listen to the performance through headphones, and find the balance between what sounds best for the venue and what sounds best for the recording. Alternatively, it is possible to adjust the mixing of the recording after the fact, if you are able to record individual tracks from the house console. This will depend on what gear you have available.

Recording with a DAW

The simplest and most practical setup for live recording is, simply, a laptop with a Digital Audio Workstation (DAW) such as Pro Tools. Most versions of Pro Tools, and their respective audio interfaces, only allow a couple of inputs. If you are recording a full band, this will limit your ability to mix the recording after the performance, however it is a very simple, high-quality, and effective means of getting a live recording. In its simplest form, it’s as easy as splitting the audio from the soundboard, inputting it to the DAW, and pressing record at the beginning of the show. If you’d like more versatility, options, and a higher-quality product, then you can bring your own soundboard with a number of channels.

Using Your Own Soundboard 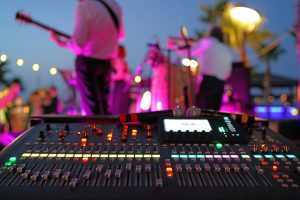 With your own soundboard you’ll be able to duplicate each individual track and mix them separately from the sound that is projected throughout the venue. If this is the route you take for recording, then it is very helpful to have all levels and settings adjusted and in place at the time of the sound check. With two soundboards to manage, it’s also a good idea to know the show from start to finish. There are often audio adjustments that must take place throughout a performance, and it can be very helpful to have notes available on when to make these adjustments—particularly if you have to make them on two different soundboards.

Other effective means of recording live music involve the use of different recording platforms. This can be as simple as a cheap all-in-one recording device or an intricate reel-to-reel tape recording system. An all-in-one device is even easier than the DAW option, and it will typically include all necessary instructions for setup. However, they often do not provide the best results. More complicated options, such as a reel-to-reel, require years of training and practice in order to achieve the high-quality results that they are capable of.

Because you only have one chance when you are recording live music, it’s especially important that everything is set up correctly. How terrible would it be to end the show only to realize that the recording was unsuccessful? You only have one opportunity to capture the performance, so preparation is very important.

Once everything is set in place and ready for recording, it’s helpful to do a test recording. If you have the opportunity during the sound check, record a full song from start to finish. In the time between sound check and the show, listen to the recording through a few different speakers to make sure that everything sounds as best as possible. If adjustments need to be made, try to find time to make them before the show. Toying with a recording setup during a performance can lead to more problems than results. 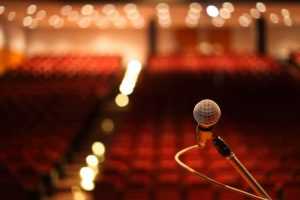 Because recording live music is a one-shot deal, anything that goes wrong throughout a performance can ruin the recording. While certain disasters cannot be controlled (e.g. equipment failure, the audience, or performance errors), some of them can be prepared for and prevented.

One of the most common problems in recording live music is the persistence of feedback. Even a small amount of feedback, in just a few moments in a recording, can greatly diminish the quality and listen-ability of a recording. During the sound check, pay close attention to any minor rises in feedback. Even if the tone is subtle, when a venue is full and the acoustics have changed, the feedback can be much harsher. Any perceived tones that are feeding back should be removed with the equalizer.

Another recurrent problem in live recording is the persistent hum and buzz of the gear. While this problem is difficult to eliminate entirely, using high-quality, new gear can greatly reduce the problem. Using quality gear will also help to prevent gear failure which can ruin a show or a recording. Often when there are technical difficulties with a performance, it is because of the minor pieces of equipment such as cables and adapters. It’s especially important to use quality cables and adapters as the difference between the cheap ones and the expensive ones is great, and the cost is justified by the extended lifespan of the equipment. 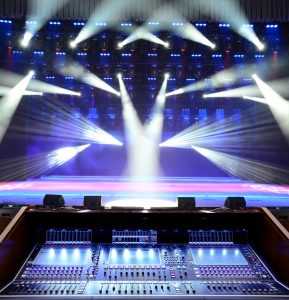 Most importantly, be sure to have everything well-rehearsed and in place before it’s time to record. A small amount of extra preparation can make all the difference, and can save you many hours when you’re recording live music, and want to do it as well as possible.