The past several decades have seen an evolution in music technology and gear, and now there are generations worth of recording studio equipment to choose from when recording. While the technology has improved immensely since the early days of music production, it has predominately gone down the road of digital processing. 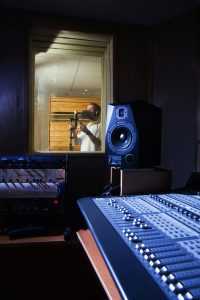 Digital gear allows for faster, lighter, easier to use, and more cost effective equipment, but many recording engineers prefer the traditional analog gear for many tasks because it has a warmer sound and is more precise in capturing and processing audio. Most professional studios will have a mixture of analog and digital recording studio equipment from a number of different decades. Often they will have several versions of the same device, all of which have their pros, cons, and different characteristics for processing audio.

To understand all of the  recording studio equipment, it’s important to have a foundational understanding of signal processing and audio signal flow. Audio signal flow is the path the sound travels while being recorded once it has been converted to electricity. A basic audio signal flow is from an instrument to a recording device, however in professional recording the signal makes many stops along the way so that audio engineers can refine the quality of the sound.

To make this simple, we will cover the different types of studio equipment in the order which they may appear in a typical audio signal flow.

The first step in recording is to convert the sound into an electrical signal that can be processed, manipulated, and recorded. For acoustic instruments like drums, horns, or someone’s voice this is done with the use of microphones. Instruments like electric guitars can be amplified and then captured with a microphone, or they can be plugged directly into the signal chain.

Microphones produce very small electrical impulses which need to be amplified in order to process, hear, and record. This is done with the use of microphone pre-amps. Pre-amplifiers can be 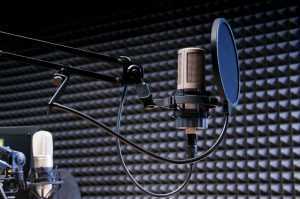 analog or digital, and they can be individual units or integrated into a recording device or mixing soundboard.

Once the signal is large enough to work with, it will typically travel through some effects processing units. There are many different types of effects that are used for all different instruments, styles, and situations, but many of the most popular and simple ones are applied to every instrument on every recording. 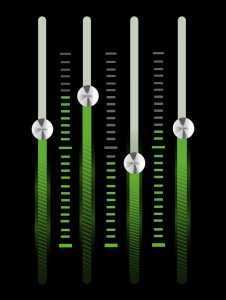 Equalizers (or EQ’s) are likely the most important of effects processors and some of the most important pieces of recording studio equipment. The can be digital or analog, and they may be a stand-alone unit or integrated into a recording device or mixing console. An EQ allows a recording engineer to manipulate the different frequencies of an audio signal. Often the recording of a sound doesn’t accurately capture the actual sound because of the way that sound waves bounce around a room (acoustics) and because microphones aren’t perfect.

An equalizer allows you to amplify or detract from the individual frequencies of a recorded sound. An audio engineer with a well-trained ear will use these to replicate the original sound of the instrument or creatively enhance it.

Delay effects processors allow a recording engineer to add a level of depth to a song. Delay units create an echoing effect that can be as prominent as the sound of yelling in a canyon or so subtle that you can’t even consciously notice the effect. This effect is often used creatively to achieve a number of interesting sounds.

Delay units are made with a wide range of features in digital and analog formats. The most coveted devices are vintage, analog delay processors because they offer a quality and warmth that cannot be replicated by digital. Unfortunately these units are many times more expensive than their digital counterparts. 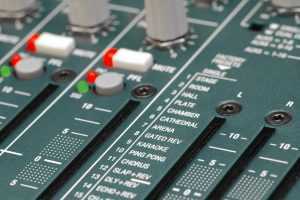 Reverb units are similar in every way to delay units except that they produce a compounded, mish-mash of many echoes rather than one clear replicated sound. The effect is used on nearly every instrument in order to achieve the sound of having been performed in a particular room.

Compression is a very important effect, but it can be difficult to understand. A compressor allows you to even out the peaks and valleys of an audio signal. It makes the loudest parts quieter, and the parts that are too quiet to hear, audible. This is used to bring out the subtleties in a voice or instrument without making the loudest parts too loud for the song.

Mixers are the most diverse of any of the recording studio equipment. They range from very large consoles that take up an entire room to small handheld devices. Mixers allow you to individually adjust the volume of each instrument, or track, in a recorded song. The volume levels are all changed relative to each other, so that when they are played together everything is in balance. The intent of mixing is to make each component of a song audible and distinct without being too loud. 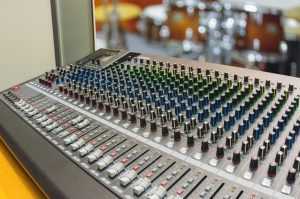 Mixers are often categorized by the number of channels they have. Each channel on a mixer is devoted to one particular audio signal. Sometimes this signal is one instrument from one microphone, and sometimes it is a number of instruments combined together into one signal.

There are many features and options available on mixing consoles, especially the larger ones. They will often include microphone preamplifiers, EQ processing, and many other effects processors.

A mixer is also used to route audio signals to and from effects processors. It is the main workstation of a recording studio, and it is used to create the balanced final product of a song. Vintage, analog mixing consoles create the best quality recordings, but they can cost hundreds of thousands of dollars. Digital technology has made it possible for people to own effective, smaller consoles in their home studios. As technology improves, these digital devices are putting out higher quality results that are approaching indistinguishable from the analog versions.

Once the song is processed, balanced, and sounding the way that the artist or producer wants, it is ready to be recorded. For many decades the process of actually recording the sound was very difficult and expensive. The most popular method before the use of computers was reel to reel magnetic tape. The tape to record on a reel to reel is very expensive, and the devices can be very difficult to use. Many recording studios still have and use reel to reel recording because of the amazing and lossless quality that it boasts. For most people, though, it’s much easier and more cost effective to use a computer-based recording program. 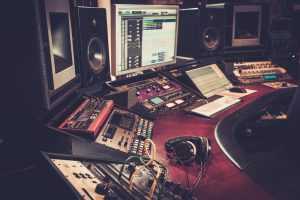 A computer that is setup to record music is referred to as a digital audio workstation (DAW). DAW’s come in many different forms, on different platforms, and with an endless number of options and features. Many recording platforms offer digital effects processing, EQ, and mixing, taking on the role of all of the aforementioned analog gears. While the quality is typically not as good, the ease of use and low cost make it a practical option for many studios.

A DAW incorporates three major components: the computer, the software, and an audio interface. An audio interface allows the end of the signal flow to be plugged into and received by the computer. The quality of the audio interface will greatly influence the quality of the finished product when recording onto a DAW. The audio interface is responsible for converting the analog electrical signal into the 1’s and 0’s that make up a digital audio signal. How effectively this device makes this conversion can make or break a recording studio, and there are many different devices in many different price ranges for this process.

Throughout the entire process of recording it is necessary to listen to the sound of the recorded and processed audio signals. Most recording studios will have many different speakers and headphones in a number of sizes, styles, and qualities. When mixing a song it is important to hear how it will sound through all different kinds of speakers, as each brand will leave its mark on the sound ever so slightly. 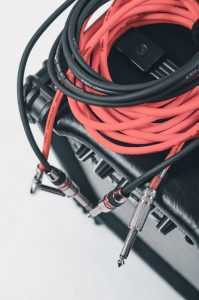 For all of this equipment to work together properly, there are many different kinds of cables, power-amps, converters, and adapters. A recording studio needs many unique pieces of equipment to accommodate the needs of whoever is recording there, and they will usually have many different instruments available to choose from.

Professional studios have a great deal of recording studio equipment devoted to refining the acoustics of the rooms, as well. Foam blocks and sound baffles are used to prevent echoing and there are many different pieces devoted to enhancing the soundproofing.