A musician is ever dependent on their gear. This is particularly true of guitarists, as the popularity of the instrument has resulted in an immense amount of guitar gear that musicians must be aware of. Innovations for the electric guitar over the past few decades are numerous and impact everything from the playability of the instrument to the sound that it creates. 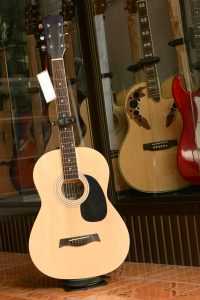 There are many pieces of gear that musicians don’t even consider when they begin playing the instrument. Some of these are requisite while others, such as straps, simply make the guitar easier to play. Because every player has a different playing style and intended sound, the amount of guitar gear available can be daunting to sort through. The many variations all have different pros and cons, and the features available afford a wide price range of products for every level of player.

Obviously the most important piece of gear for a musician is their instrument. With any instrument the many different varieties and sounds lead to musicians choosing one particular brand or style over the rest. While there are countless styles of guitars from all different producers, they can be broken down into a few different categories. The broadest categories, with the most distinct differences, are electric versus acoustic. 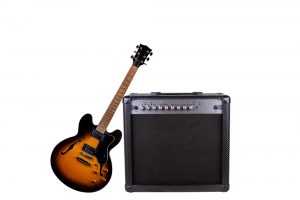 compared to its acoustic counterpoint, but there are endless variations in style, shape, and sound. The electric guitar is generally much easier to play than the acoustic guitar, however it requires significantly more guitar gear (i.e. amplifiers and cables).

When the steel strings of an electric guitar vibrate over the coils and magnets of the pickups, the sound is converted to an electrical impulse, sent through a cable, and made audible by an amplifier. When the guitar is not amplified, it is nearly inaudible. Because the electric guitar doesn’t require the large resonating shape of an acoustic guitar, they are generally much lighter and easier to transport. The simple design of an electric guitar, and the way that the strings are amplified, means that the strings have less tension and are closer to the fretboard. This distance from the frets is typically referred to as the action, and the low action is how electric guitarists are able to play such intricate, fast phrases and runs. 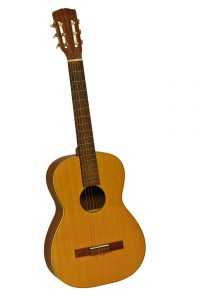 Unlike electric guitars, acoustic guitars do not need to be amplified to be heard. However, many acoustic guitars do have the option of being amplified if needed. These are referred to as acoustic-electrics. The acoustic guitar is a much more precise and intricately designed instrument, and because of this, the price often greatly influences the sound and ease of use. A cheap, poorly designed electric guitar can be incredibly difficult for a new guitarist to play successfully, often a result of high action that makes the strings difficult and painful to press down.

Second to the guitar itself, the amplifier is the most important piece of guitar gear. Without an amplifier an electric guitar isn’t audible enough to play effectively and an acoustic guitar may not be loud enough for a performance. The technology that amplifiers use has developed significantly in recent years, and the amps have become lighter, louder, clearer, cheaper, and more versatile. That said, many people stand by the use of older amplifiers for a number of reasons. Vintage guitar gear has a huge appeal among musicians, and not just for its rarity.

The 1970’s are seen by many as the golden age of amp production. There is a distinctive sound to the amps produced at this time, and they are the favorite among musicians who play in the style 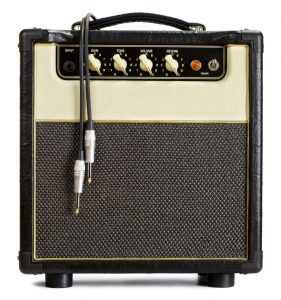 and tone of classic rock artists. At this time, amps were more often made of analog components rather than digital ones. As a general rule, analog guitar gear offers a warmer, richer, and unique tone, whereas digital gear offers more versatility, ease of use, and a better price.

Analog amplifiers make use of a component called tubes, and tube amplifiers are unanimously distinguished as the best. Tube amplifiers are capable of very loud amplification and very clear, rich tones, but as a result, they are often very expensive. Alternatively, the technology for digital amplifiers has improved significantly, and many digital amplifiers offer a multitude of onboard effects and tones that replicate analog gear. The power of an amplifier is measured in Watts, and the range is typically from about 15W to 100W. The higher the Wattage, the louder the sound of the amplifier, however there is a big difference in volume between a digital amp of a certain Wattage and a tube amp of the same. The tube amp will typically be much louder than the digital amp, even if they have the same amount of power.

Effects are very important to most guitar players, particularly electric guitarists. There are a seemingly infinite number of effects that can shape and hone the sound and tone of an electric or electric-acoustic guitar. Sometimes these effects are used to make the tone more clear and clean, while most commonly they are used to distort the tone, adding fuzz and drive. 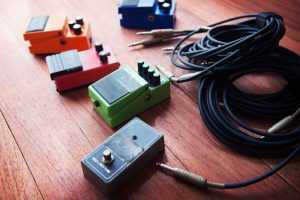 Most effects are utilized in individual, battery-operated pedals, with each pedal–or stompbox–offering its own unique effect. The most common of these effects include distortion, delay, chorus, reverb, and many others. Occasionally, many of these effects are incorporated into one large multi-effects pedal. They are also available on many models of digital amplifiers.

Effects are usually the best way for a guitarist to develop their own unique sound. Many players like to incorporate the use of many different effects, and the order and amount in which these are applied to the guitar can create a very distinctive and unique sound. Many famous guitarists throughout history are easily recognized by the tone of their guitar and the effects that they use.

Instrument cables are an often neglected piece of guitar gear that are of great importance. The quality of an instrument cable is usually seen as having little importance to the sound of an electric guitar, but this is inaccurate–particularly when the instrument is run through many different effects and many different cables are used. Every time the audio signal is put through a different component, cables included, the signal is slightly degraded. The better the quality component, the less the signal will be impacted.

Also, cheap cables are notorious for breaking or impacting the sound with crackling. There’s nothing more frustrating than being in the middle of a song at a practice or a performance and having your cable fail. For this reason, it’s very important that guitarists choose quality cables. 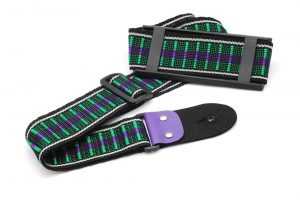 A strap allows a guitarist to harness the instrument over their shoulder while they give a performance. Straps make it possible for performers to stand while playing their instrument, and straps come in many different materials and sizes. Everything about straps comes down to personal preference. There are many colors and designs, but what’s most important is that you find a strap that fits well and is comfortable. It’s also advisable to get strap-locks. If you jump around while performing, your strap can detach from the guitar and the guitar might fall to the ground. Strap-locks fix the strap to the guitar and prevent this from occurring. 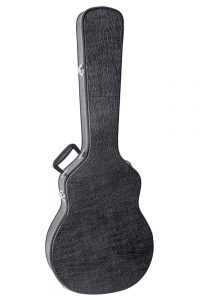 It’s very important to have a case for your instrument. A case will allow you to travel with your guitar gear while keeping it protected and safe. There are many styles and qualities of guitar cases, but the two greatest distinctions are between hard and soft cases. Hard cases are more durable and will serve to protect your guitar from being battered or damaged, even in the back of a van or in the cargo section of an airplane. Soft cases, on the other hand, only offer limited protection for the instrument. Soft cases are usually made of a canvas material, and they can be helpful in keeping your instrument dry. They will protect your guitar gear from scratches and gouges, but they won’t protect it from a heavy beating.

Guitar picks make it easy for a player to pluck the strings. Every guitarist has a personal preference for the thickness and flexibility of the picks that they use, and while there are some slight 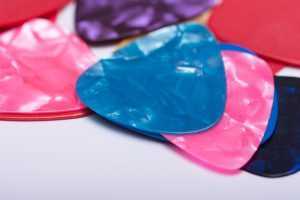 variations in shape and size, a triangle with rounded edges is the standard.

Choosing guitar gear all comes down to personal preference, and there’s no one piece of gear that’s right for everyone. When choosing gear, it’s best to shop around and figure out what works best for you. You may not need items that other guitarists swear by, so take some time to figure out what best helps you create your sound.

Tips for Choosing Your First Guitar