Navigating the world of types of guitars, with the many different styles and brands, can seem like a never ending process. When you’re just starting out playing and learning the guitar, the multitude of styles might come off as daunting or confusing. Each different type of guitar is suited for a particular style of play and genre of music, and some of these guitars may require different ways of playing or equipment to be effective. 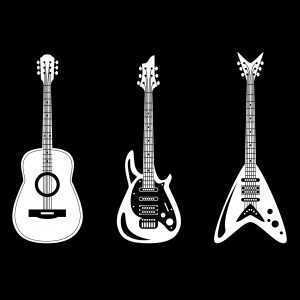 Especially if you are looking into purchasing your first guitar, it’s important to have a solid understanding of all the different styles and types of guitars that are available, and how each of these differ in sound and play-ability. If you are particularly interested in a certain genre or style of guitar playing, and this is what you are trying to learn, then you will want to have the correct guitar to correspond with this sound. For example, if you are an aspiring flamenco guitar player, which has a very distinct sound and way of playing, it wouldn’t make any sense for you to purchase or use an electric guitar that is meant for Heavy Metal music. Likewise, if you want to be a blues player, a classical guitar wouldn’t make as much sense for you to use as a Fender Telecaster would.

In general, the types of guitars are broken down into two broad categories: electric and acoustic. These guitars are greatly different, not only in appearance, but also in sound and play-ability. Generally with an acoustic guitar you get a more classical, folk oriented sound, while with an electric guitar you are free to manipulate the tone with effects, amplifiers, and other technologies. Electric guitars tend to be easier to play, however it’s often advisable to learn on an acoustic so that you strengthen your fingers more quickly. Even within these two categories of guitar, there are many other types of guitars that have more minor differences. So, let’s take a look at all the different guitars available and how each differs from the other.

There are all kinds of acoustic guitars available on the market, and while most of them are somewhat similar in style, sound, and play-ability, there are a few big exceptions. Generally, an acoustic guitar is much larger than their electric counterparts. They have a large, open, hollow body that allows the sound from the strings to resonate and be amplified. Rather than plugging the guitar into an amplifier, acoustic guitars can be played and heard anywhere.

Generally, acoustic guitars are categorized based on their size and some general shapes and features. From largest to smallest, the styles of acoustic guitar are: Concert and Grand Concert, Auditorium and Grand Auditorium, Dreadnought, Jumbo, and travel-size.

Aside from size, acoustic guitars are also broken down into steel string or nylon string variations. In modern guitar playing, steel string guitars have become much more common. A steel string acoustic guitar tends to have a much louder and brighter sound. These guitars are generally a bit larger than nylon string guitars, and they are the preferred choice for country, rock, folk, and all other modern styles of acoustic guitar playing. Because the strings are metal, they tend to have much more tension and are significantly more difficult to play. As a new guitarist, you may find that pressing the strings to the fret-board is quite hard on your fingertips, however, over time you will develop calluses that will make the tips of your fingers much more tough. Also, with practice, the muscle memory and strength of your fingers will improve, which is why it is recommended that you start out on a steel string acoustic guitar.

Classically strung acoustic guitars utilize nylon strings 3-6 of the strings. These nylon strings have a much more traditional and mellow sound, and they are much easier on your fingers. They allow for easier legato techniques, and these are the preferred strings for classical and flamenco style guitar playing. Because of the easier play-ability of these strings, intricate, fast, and complex riffs and patterns can be played more smoothly and effectively. These guitars are often smaller than their steel-strung counterparts, and as a result, they usually aren’t as loud. Generally, when playing a classical acoustic guitar, you position the bottom concave on your left leg (as a right-handed player), rather than your right leg like with a modern acoustic.

Apart from the very common and standard steel-string and classical acoustic guitars, there are many other variations that are found less frequently. Acoustic bass guitars are fairly uncommon, but afford a much lower range and different play style. These guitars are almost never strummed, but rather the strings are plucked individually. Generally, acoustic bass guitars will have four strings, just like electric bass guitars.

Similar to the standard acoustic guitar is the guitarron used by mariachi players. The guitarron is a very large, deep, bass guitar that offers much greater volume than typical acoustics. This guitar is a five-string instrument, and is not frequently found outside of Mexico.

Other variations of the acoustic guitar can be very different in use and sound. These include a wide-range of guitar-like instruments that are played in a similar way but fit into different styles of music and purposes. Banjos, mandolins, and ukuleles all fall within this category, however they require some learning to transition from playing a standard guitar. Each of these has a sound that is particular to a certain region, and they tend to have far less versatility than the usual guitar.

The most similar electric guitar to the acoustic guitar is the acoustic-electric guitar. This instrument is, essentially, an acoustic guitar that has been fitted with technology to allow you to plug it into an amplifier. These guitars usually offer a volume knob and equalizer, and a piezo pickup that allows the playing to be amplified. Aside from these fittings, the play is typically exactly the same as a regular acoustic guitar, and these can also be played acoustically.

Hollow-body electric guitars are basically a hybrid between the acoustic and the electric guitar. A hollow body guitar is setup to play much like an acoustic guitar, however it has a larger, hollowed out body that gives it a different tone. While it doesn’t quite sound like an acoustic, it has far greater resonance and often more warmth to the tone.

The lap steel guitar is probably the most different variation on the guitar. While it is available as electric or acoustic, electric ones are more popular and there are more variations of them. The

biggest difference with a lap steel guitar is that it is not played upright like a traditional guitar. Rather, the lap steel is played while sitting, with the strings and fret-board facing upward. Often times the guitar is played with a slide, for a twangy country sound.

Other electric guitar variations include all of the styles of acoustic guitars, however they are fit with technology to amplify them. While electric mandolins and banjos are not common instruments, they do exist and are something that every guitar player should be aware of.

Now that you know and understand all of the different styles and types of guitars, it will surely be easier for you to navigate which guitars you want to play or purchase. Complicated as it all may seem, breaking the types of guitars into broad categories will make it all much easier to understand.

Tips for Choosing Your First Guitar