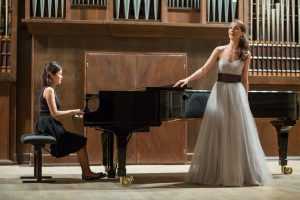 Congratulations! You’re a soprano who has been consistently studying voice for a while and you feel ready to dive into the world of auditioning. Now comes the time to prepare a list of soprano audition songs in order to present yourself to an audition panel as the dedicated, well-rounded musician that you know yourself to be.

Typically, an audition panel will request that the singer present a “package,” a list of repertoire that meets the organization’s specific requirements and shows off the singer’s strengths and potential. These requirements might possibly include language, style, genre, tempo, and musical era. Though a singer rarely gets the opportunity to sing through an entire package during an audition, he or she should consider the following steps when deciding on audition repertoire in order to best prepare for a successful audition experience:

Below, I’ve listed a selection of soprano audition songs organized into categories based on potential specifications. These songs and arias are most appropriate for sopranos in their mid-teens to early-to-mid-twenties. While these songs represent a fraction of potential soprano audition repertoire, they will provide a starting point for any auditionee new to the process:

“When I Have Sung My Songs” by Ernest Charles (English)

“Sure on this shining night” by Samuel Barber

“Fair Robin I love” from Tartuffe by Kirke Mechem (English)

“Deh vieni, non tardar” from The Marriage of Figaro by W.A. Mozart (Italian)

“What Good Would the Moon Be?” from Street Scene by Kurt Weill (English)

*For younger and college-aged sopranos, folk songs require many of the technical skills needed to sing classical repertoire and are often a refreshing addition to an all-classical package:

Anthologies devoted to specific styles and languages of soprano repertoire exist in abundance today. If you’d like to explore additional potential soprano audition songs, here are a few options to check out at your local music library:

The First Book of Soprano Solos – Parts I, II, and III by Joan Frey Boytim

Art Song in English: 50 Songs by 21 American and British Composers for High Voice by Carol Kimball

Parts of an Opera: A Quick Beginner’s Guide