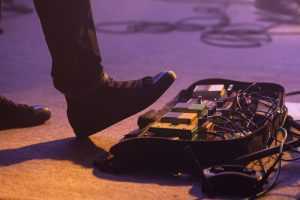 When we think of instruments, we usually conjure up images of guitars, pianos, and drum kits, but the innovative music currently being created with the help of effects pedals almost certainly ushers in the need to start viewing technology as a powerful instrument all by itself. These days, the technology delivered by effects pedals are found in every form of music from experimental jazz to heavy metal to shoegaze to punk, and this is due to the fact these effects pedals give musicians the ability to create sounds and atmospheres that are completely new and unique. In this article, we’re going to walk you through some common and lesser-known pedals, but first let’s talk a little bit about the origin of this important technology.

A Brief History of Effects Pedals

Amplifiers made their way into national prominence during the 1930’s during the swing era. They were invented to help guitarists sound as loud as horn and drum players. Early amps weren’t nearly loud enough, so guitar makers like Rickenbacker started producing guitars that came stocked with effects like vibrato to help deliver a thicker sound. Guitarists liked the huge, cavernous sound their instruments made when playing during sound check at empty concert halls, so they looked for ways to add reverb to their instruments. One guitarist/inventor attached his instrument to a 500 gallon tank in an effort to achieve this, but gave up when he realized his invention wasn’t practical for live performances.

The next two decades brought huge advancements in sound technology, and by the 1950’s, most amplifiers came with guitar effects like reverb, tremolo, vibrato, and echo. The first standalone effects pedals were huge, expensive, and not easy to perform with on stage, but by the 1960’s, engineers had learned to design high-quality effects pedals that were affordable and easy to play. 50 years later, effects pedals are more important than ever, and this trend shows no signs of slowing. Most the guitar music we hear today is being enhanced or altered in some way by effects pedals.

In 2017, bands like Grizzly Bear, Sigur Ros, and Beach House are transforming simple guitar music into something truly captivating with the help of guitar effects pedals. Guitarists now typically construct pedal boards, which are large panels that connect a variety of effects pedals that are linked together with cables. Grizzly Bear’s Daniel Rossen typically performs and records with a pedal board of nearly 20 different effects pedals. The way in which a guitarist uses effects pedals together dictates the sound their pedal board produces. Now that you’re up to speed on what effects pedals are and where they came from, let’s chat a bit about what each pedal does. 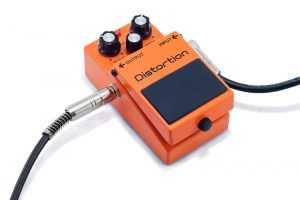 No effects pedal has influenced modern music more than the distortion pedal. Entire genres of music including metal, punk, and grunge rely entirely on the massive, unyielding sound of the distortion pedal. Blues guitarists pioneered guitar distortion by turning up their vacuum-powered amplifiers to screeching loud volumes which effectively distorted the sound. In 2017, some amps are built to achieve distortion with a simple increase in volume, but most guitarists typically rely exclusively on distortion pedals to do the job. Distortion pedals alter the guitar’s signal by increasing the gain and by clipping the signal, which adds sustain and harmonic and enharmonic overtones.

Reverb pedals deliver a long, reflective sound to a guitar’s amplifier. Essentially, reverb pedals bring the sound of playing everywhere from a small cave to a massive cathedral right to wherever you’re playing. We’re quite used to the way music sounds with reverb now, but its addition was revolutionary when it started showing up in popular music half a century ago. Shoegaze bands (bands in the 90’s whose genre is named after the image of a guitarist staring down at their effects pedals) set themselves apart by their heavy use of reverb pedals. It’s also not unheard of for bands to use reverb pedals to enhance vocals on stage in a live setting.

Delay pedals are a simple way to transform guitar sounds into ones significantly more nuanced and complex. The delay effect records the guitar’s input signal and plays it back after a specified amount of time. These pedals give you the power to create simple delay patterns as well as complex sound structures that make the guitar sound like an otherworldly instrument. Paired with a reverb pedal, the delay pedal gives guitarists the ability to construct completely unique soundscapes. 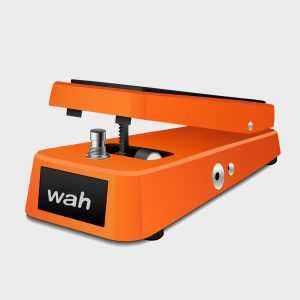 The wah-wah pedal creates a sound that mimics the human voice. This effect was invented and pioneered by horn players in the 1920’s who found they could create a tone similar to the sound of crying by muting the bell of their instrument. A wah-wah pedal achieves this unique sound by sweeping the peak response of a filter up and down in frequency. Wah-wah effects pedals are prominently used in funk and hip hop genres.

Sometimes referred to as the “underwater effect,” the tremolo effect pedal does not deliver a vibrato effect, despite what you may have heard. The main difference between vibrato and tremolo is that vibrato effects pitch while tremolo manipulates volume. Guitar masters like B.B. King and Eric Clapton often employ this effect directly in their playing, but a tremolo pedal delivers the effect by a circuit that automatically turns the signal up and down.

An effect pedal that produces notes an octave above called the Octavia was first designed by Jimi Hendrix’s sound technician Roger Mayer in the 1960’s. The effect can be heard during his solo in the song “Purple Haze.” Today, octave pedals are used in many different genres including psych rock, indie pop, metal, and shoegaze. The hugely famous song “Seven Nation Army” by The White Stripes uses this pedal to generate notes an octave lower to create a low end bass line that’s played on the 6th string of Jack White’s guitar. When adjusted in just the right way, this effect pedal can mimic the sound of a booming pipe organ. 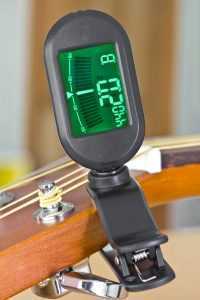 Okay, this pedal is not an effects pedal, but it is owned and used by practically every serious guitar player on the planet. In the best of live settings, tuning can often be a nightmare without the help of a tuning pedal. These pedals show bright, easy-to-read notes that can help keep your guitar in tune for recording and performances. If you ever play in alternate tunings, adding this pedal to your board is basically essential. The best part about these pedals is that they don’t require complete silence around you to function correctly. This gives you the ability to tune mid-song or in conditions that are too loud to hear yourself, like a crowded bar for instance.

The flanger pedal combines two identical signals together to create a distinct swooshing sound. The effect is sometimes called the “drainpipe” or “jet plane” effect. Flanger pedals are ideal for thickening up guitar sounds. Jimi Hendrix’s song “Bold As Love” is a good example of a flanger pedal being put to good creative use.

Originally created in the 1980’s, vibrato effects pedals have made a comeback in recent years. As we mentioned before, tremolo pedals manipulate volume while vibrato pedals manipulate pitch. These pedals inject a mysterious quality into the sound of a guitar and are ideal for moody songs. 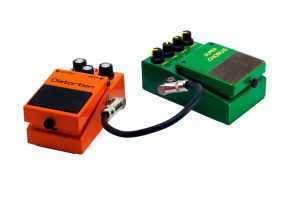 The chorus effect occurs when similar sounds in timbre and pitch come together to create a singular distinct and ghostly sound. The guitar effect on Nirvana’s famous song “Come As You Are” famously uses the chorus effect, and Elliot Smith’s recordings feature a natural chorus effect achieved by layering together multiple takes of the same vocal line into one song. Chorus effects pedals are mainly used to highlight guitar parts.

Looping pedals are giving performers unprecedented options for looping and sound manipulation during live performances. These powerful pedals give musicians the power to loop and layer sections of music in perfect rhythm (if you can play in perfect rhythm, that is). Lots of the new exciting music being performed and written is now done so with simple looping pedals.

Compressor pedals have the ability to color amplified sounds and to bring them up to a maximum level. These powerful pedals can increase the sustain of your guitar without distorting it. Basically, the compression effect either limits sounds that are too loud or brings the sound up when they’re too quiet. If you’re looking for a clean tone to play during performances, a compressor pedal can help you get the sound you’re looking for. 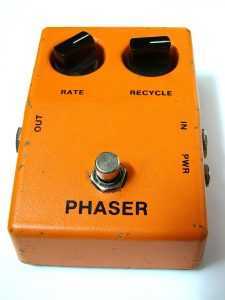 Similar to chorus and flanger effects, the phaser pedal injects a “swooshing” sound to your tone by adding peaks and valleys to your sound. The Rolling Stones song “Shattered” uses a phaser effect in the guitar part.

Being able to control volume with a foot pedal might not seem that important or useful, but it can help musicians gain precise control over how they present their sound. With volume effects pedals, guitarists can add a swelling sound into their playing by slowly phasing volume in by pressing down the pedal. Musicians can also dramatically bring sounds in and out with quick movements of the pedal.

This pedal is essential for guitarists wanting to minimize the unwanted noise that amps create when the guitar isn’t being played. Noise gate pedals reduce the buzz of an amp by blocking out the noise while it’s activated. This pedal is a must-have for guitarists who perform regularly.

EQ effects pedals give you the power to alter the sound quality of your instrument by letting you bring out the lows, mids, and high ends of your signal. Traditionally used in recording, EQ pedals are mainly meant for musicians who are looking to create a specific tone on stage. Not every musician needs an EQ pedal, but this effect does wonders for players who are particular about their stage sound. 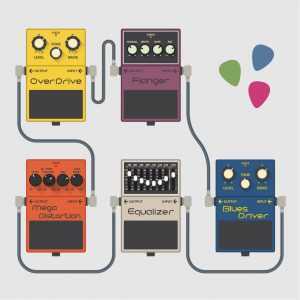 Boost pedals bring up the signal of your guitar as it travels to your amp without distorting the sound. This effect is ideal for guitar players who want a solid, clean sound. Many players activate this pedal while playing guitar solos.

We’ve already covered octave pedals, but there are other pitch-shifting effect pedals that can add interesting harmonies to your tone. It’s important to note that pitch shift pedals create synthetic harmonies that don’t tend to sound very realistic. If you’re looking for a tone that precisely matches your own, consider adding another guitarist into the mix or by simply learning how to play the added harmony on your own.

If you’ve ever wanted to make your guitar sound like a piano or organ midway through a song, then consider picking up an instrument modeling pedal. These pedals contain powerful software that can convert your tone into one produced by the instrument of your choosing.

Similar to EQ effects pedals, some pedals come equipped with the option to run signals as stereo or mono. The stereo option presents a more comprehensive representation of your sound, but it also can come with unwanted sound problems, which is the reason that many musicians opt for mono.

Other Instruments That Use Pedals 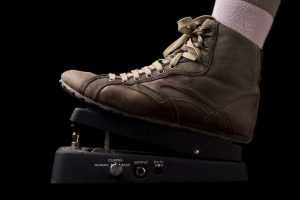 We’ve just scratched the surface here as far as effects pedal options go. There’s a myriad of options to choose from with more and more exciting new pedals coming out each year. The pedals we described in this article don’t necessarily need to exclusively be used for guitars. Like we mentioned, vocalists are using effects pedals to create new sounds with their voices, and bass guitarists have been using pedals to enhance and alter their sound for decades. In theory, effects pedals can be added to any instrument, but there comes a point where technology muddles creativity rather than enhancing it. But we’ll let you be the judge of when and when not to use this amazing technology.