Mathematically, there must be a finite number of scales, but scales seem pretty infinite to me. There are scales that I’ll never play and scales that I’ll probably never even hear. Even more so if you take into account cultures that use quarter-tones. Each scale connotes something different. This is unique to each person. When you hear a certain scale, you probably associate it with something. It could remind you of something you’ve heard before, or it could simply connote a certain feeling. The diminished scale is one of the defining sounds of jazz. 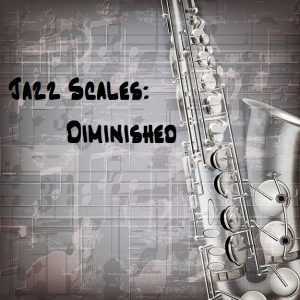 Now that we know the construction of the diminished scale, we should figure out how it functions in jazz. In jazz education, we often talk about “chord/scale relationships”. The meaning of this phrase is intuitive. It simply means figuring out how each scale relates to each chord and vice versa. The two diminished scales function in different ways.

The “whole/half diminished scale” works over a fully diminished seventh chord. If you look at the scale, every other note is a part of the chord. The notes in-between act as leading tones to the chord tones.

The “half/whole diminished scale” works over a dominant seventh with a flat nine and/or sharp nine chord. This is why some people call it the “dominant diminished scale”. Let’s analyze the notes in the scale and see how they relate to the chord. The notes in the scale, in ascending order, are: 1, b9, #9, 3, #4 (#11), 5, 6 (13), and b7. So, every note in this scale is part of a dominant thirteenth with a flat nine, sharp nine, and sharp eleven chord.

I suggest playing these chords on piano and playing the diminished scale over them, so you get the sound in your ear. You can also arpeggiate the chord and then play the scale.

Here’s where the “endless possibilities” part that I talked about in the intro is revealed. We now know the construction of the diminished scale and how to apply it to chords. But we don’t always want to just run the diminished scale whenever we see a chord that it fits over. That’s boring. We can manipulate the scale to make it sound more interesting. Think about practicing the major scale. You probably have certain exercises you practice. Maybe you run the major scale, then practice it in thirds, practice it in diatonic triads, etc. You can do all of these with the diminished scale as well.

These are just a few examples of seemingly endless possibilities. I’m still discovering new patterns. The second example is an extremely popular pattern in jazz. If you listen to a lot of jazz, I can guarantee you’ll hear it everywhere.

You can probably figure out now how to apply the diminished scale to improvising on jazz tunes, but, to be thorough, I’ll provide an example. Whenever you see or hear one of the chords from above, you can use the diminished scale. There are many popular jazz tunes that have dominant seventh flat nine chords. A few of these tunes are “Autumn Leaves”, “Alone Together”, “Stella By Starlight”, “Softly, as in a Morning Sunrise”, “What Is This Thing Called Love”, etc. As an example, I’ve decided to use the tune “Woody ‘N You”. “Woody ‘N You” utilizes dominant seventh sharp nine chords in three different keys in the ‘A’ sections. The ‘A’ sections use all of the diminished scales. It’s common in jazz to blanket the diminished scale over a whole “ii-7(b5) – V7(#9)” progression. I think of the root of the V7(#9) chord and use the “half/whole diminished scale”. In the provided example, I used the first example from the previous section. You can apply the other two examples as well. Also, try searching for more diminished scale patterns to apply, or come up with your own. There are plenty of resources to find these.

The diminished scale one of the defining scales of jazz. It’s one of those sounds you’ll hear all the time as a jazz player. This article is meant to provide an introduction to the scale and how to begin to apply it to real life playing situations. I suggest you seek out more resources to get an advanced understanding. Ask your teacher about the diminished scale.

In the following weeks, each one of my blog posts will focus on a different scale that is commonly utilized in jazz. As always, happy practicing.