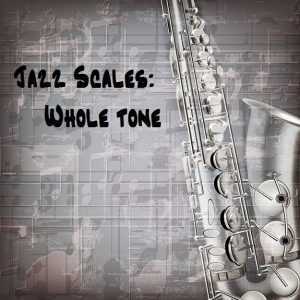 If you happen to be a fan of classical music from the Impressionist Period on, then you’ve definitely heard the whole tone scale, at least passively. Not that the whole tone scale was never used before the late 19th century. You can hear it in music as far back as J.S. Bach, and probably even before then, but it started to become more widely used around the Impressionist Period.

Maybe classical music isn’t really your thing. Maybe you’re more a fan of pop music. Take a quick listen to Stevie Wonder’s “You Are the Sunshine of My Life”. You’ll hear the whole tone scale within the first ten seconds. It’s pretty easy to recognize.

In my last post, I talked about the diminished scale and how its possibilities of manipulation were seemingly endless to me. I talked about how learning about the diminished scale had a pretty big impact on my musical life. I’m not sure I can quite say the same thing about the whole tone scale. Maybe it’s just my ear’s personal preference, maybe it’s because there are less notes in the scale (and therefore, mathematically, less possible permutations), maybe it’s just not used as much as the diminished scale. It is, however, an important scale to know and a good preface to my next blog post’s scale (hint: it’ll be a combination of the diminished and whole tone scales). And it is definitely one that you’ll come across in jazz music.

The whole tone scale is easily recognizable for a few reasons. The interval between each note is the same. The only other scale like this is the chromatic scale. The whole tone scale is comprised completely of whole steps, like the chromatic scale is comprised completely of half steps. Because of this, if there is no underlying chord as a point of reference, it is impossible to tell what the root of the scale is. Also, since there are no half steps, there is no “leading tone” sound. The result of this sound (or lack of sound) is hard to put into words. I’ve heard people describe it as sort of “floating” sound. I can definitely hear that. Maybe it’ll sound different to you. The best way to know is to play it on a piano or your instrument and see what it connotes for you.

Last blog post, I introduced the concept of “chord/scale relationships”. The best way to figure out how a scale relates to a chord is to break down the scale and analyze each tone. Before reading on, I advise that you look back at how the scale is constructed and try to figure out for yourself what chord the whole tone scale would sound good over.

The best way to learn and retain information is to learn the process of learning that information.

Occasionally, you’ll see an augmented triad (1, 3, #5). The whole tone scale works over this chord as well.

Here are a few possibilities:

The first example is a basic scalar exercise you can use with any scale.

A good way to practice applying this scale to improvising is to practice it over a blues piece. The twelve bar blues progression in its simplest form is comprised of all dominant chords. I would suggest practicing a bunch of whole tone exercises over blues to get the sound into your ear. A harmonically altered version of the blues progression you can practice over would look something like:

Also, there’s a very popular jazz standard called “Stella By Starlight” that specifically uses a dominant seventh with a sharp five chord. The first chord of the bridge (bar 17 of the form) is especially striking because of this, and it’s the perfect place to use the whole tone scale. I’ve written out a sample solo over the bridge. The first two bars use one of the whole tone exercises from above.

The whole tone scale is an important part of music. It has a very recognizable sound. Also, it’s not too difficult to learn. There are only two scales and they lay well on pretty much every instrument. As always, this blog post is meant to be a brief introduction. There are plenty of excellent educational resources available that delve deeper into all things concerning the whole tone scale. Enjoy practicing. Next article will be about the altered scale (diminished whole tone scale).