When children begin to learn to play an instrument through the Suzuki method, performance is pretty much a guaranteed part of the program. Whether it’s showing Mom a new technique in the lesson or doing a different skill before a group class, a Suzuki performance is a natural part of learning, and the concept of ‘performing’ is no big deal when the child is ready to play. 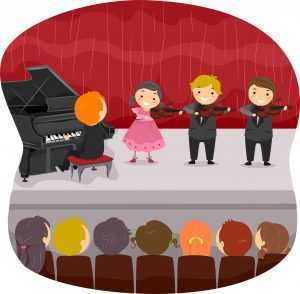 How Is Performance Presented in the Suzuki Method?

In traditional Suzuki lessons, the teacher, student, and parent are a tight-knit group. They work as a team, rather like how a sports coach works closely with the athlete and her family. There is plenty of one-on-one between the student and teacher, but the parent is expected to help when the teacher is not there – for example, during home practice sessions.

The beauty of this system is that the child is used to having observers close by at all times. Will there ever be a time when the child works on his music without supervision? Certainly, especially as the child grows and matures. But when it is ‘normal’ to have a group around you as you play, especially when the child is young, this is the first step in preparing the student for performance proficiency.

Depending on the Suzuki teacher and program you attend, there will usually (but not always) be opportunities to work in group classes. A group class is composed of students at approximately the 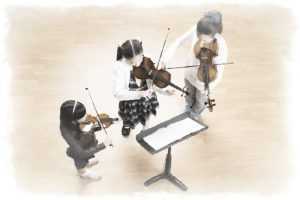 same skill level. They are usually grouped by book level, so everyone generally knows the same pieces. In a group class, there will be peers and parents there, along with the teacher. Playing in an ensemble is normal – everybody wants to play, so they learn to play as a group. The teacher may have different activities to encourage dynamics, rhythm, working in sync, you name it – but there should be a purpose to the activities that are done in class.

During a group class, students may be called upon to demonstrate skills or techniques. Sometimes this happens in small groups – say the class is divided in half and the two sides try to ‘play that tune’ as the teacher calls out the name of a Suzuki piece. Or maybe, the students play centipede style – the kid first in line does the first two notes of Perpetual Motion (a favorite Book 1 piece), the next one plays the next two notes, the next takes the next two, and so on until they get to the end of the piece. Is this solo playing? Yes. But it is solo practice in the comfortable setting of keeping on your toes and keeping the game going. Are the parents watching, like an audience? Sure. But why worry about it? Having Mom and Dad positively supporting you is always welcome. When the child is involved in music making, he is developing a terrific level of concentration and confidence in his skills.

Now, lessons and group class are great ‘starter’ places to begin your Suzuki performance training. But in the Suzuki method, there is also a frequent series of concerts that children look forward to. Sometimes, it’s a ‘play-in’ or ‘play-down.’ In these events, all the students from the program are gathered on a stage (or the front of a church, or an auditorium – whatever venue your program uses). Then, they start with one song that some children know (led by the teacher and perhaps a piano accompanist) as the parents watch from the seats. The next song is known by a few more children, so they stand and play along. This continues until all the kids are standing and playing, usually on the simplest of the Suzuki repertoire for the newest players.

This is a fantastic way to keep things fun. The child sees a familiar teacher leading the music, she has classmates who are playing right next to her, and her parents are out in the audience, close enough for comfort (and primed with the video recorder, so she can watch it later, if she wants). The applause is a neat bonus – and the signal for the kids to head for their parents and the snacks afterwards! (Yes, having a carry-in snack or treat at the end is sometimes the real goal, for some kids. Go ahead and let it be that way – it makes the whole performing experience a good one.) 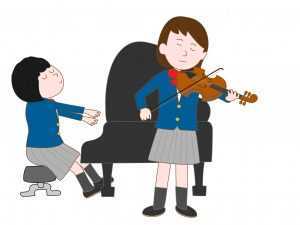 Then, there are solo recitals. Some programs simply have a series of concerts where the students get up to play their polished tune as a solo with a piano accompanist before a group of fellow students and parents. Other programs like to do ‘graduation recitals,’ which were designed by music education founder Dr. Shinichi Suzuki to serve as stepping stones of progress. You graduate from one level of playing to the next and your solo with the pianist is proof that you have achieved proficiency in the repertoire.

Some programs have both a solo recital and a graduation recital. Either way, it is a more formal event when kids get to dress up and have a reception at the end. It is great ensemble work, too, to be playing with an accompanist (some programs let you have several rehearsals with the pianist before the recital).

And one last Suzuki performance venue kids usually have is the book concert. When a student has mastered all the pieces in a Suzuki book, he usually gives a little solo recital of all the music. This can be done just before a few friends, maybe the grandparents and close relatives, or before a church group or retirement center crowd. Seriously, when children play music at a retirement center, the benefit is multiplied: the elderly appreciate the change in scenery, your child gets great experience playing in a new place, and he is able to interact with many different ages of people.

Practicing Performance = Comfort with Being Front and Center

When a child has been through the Suzuki performance system of preparation, he is comfortable with the concept of an audience. Play in front of peers? No problem. Play with an accompanist? Been there, done that.  Perform before an audition committee – maybe only three people there? That is old hat. The child has been through many different experiences that have given him performance proficiency. Performing is a natural part of living the musical life, and it isn’t a concept to worry about.

Developing concentration is a side benefit to Suzuki performing. When a child is used to reviewing old pieces and memorizing music, it helps him or her prepare for musical excellence. Suzuki 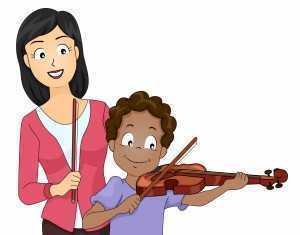 students are typically not taught with the music in front of them. The parents can use the music, the teacher uses the music, but the student does not. He or she learns by ear and by example from the teacher or fellow classmates. The teacher will sometimes refer to the music, as in “See, that’s an up bow” or “These crescendos need to be louder” but especially for young children, the sheet music is just a peripheral. This helps the child develop musical independence. If you can hear it in your ear as you play it, you can keep on playing even when someone else becomes distracting, whether it is the piano accompanist struggling with a page turn or someone in the audience who has a coughing fit.

To help encourage students to keep concentrating on their own playing instead of the playing of others, some Suzuki students are instructed to ‘watch your highway.’ This means that you’re looking at the general area of the violin strings between the bridge and the fingerboard, right where the bow connects with the string. Sometimes called the “Kreisler Highway,” it means that you watch the ‘highway’ of your violin, to keep your bow straight. (Fritz Kreisler, the virtuoso violinist, was the inspiration of the name, by the way. Kreisler sounds like Chrysler, which blends with the idea of cars, hence the ‘highway’ concept.)

[su_box title=”Tip: ” box_color=”#6a1db0″ title_color=”#fefefe” radius=”0″ class=”width: 200px;height: 400px;”]If a child has difficulty looking at a point on the violin which is that close to his face, the teacher will sometimes choose a different spot on the instrument to become the focus point. The student watches the new spot and the same goal is accomplished.[/su_box]

Keeping your eyes on the Kreisler highway helps keep your bow from yawing sideways on the strings. It also keeps you from being distracted by the puppy trotting into the room, or a sibling using Legos in the corner of the teacher’s studio.

Other tips your teacher may give you for a good Suzuki performance are along the lines of ‘practice until you can’t mess up.’ Will you get to do a dry run of your performance? Ask the teacher. If she doesn’t tell you this ahead of time, then you can ask: how do I approach the stage? When should I bow? How many times? May I tune before I play? Will I be able to acknowledge the accompanist? Which way do I leave the stage?

The most successful Suzuki students put in a goodly amount of elbow grease during their practice sessions. This means that they memorize the music, and their stage moves, then practice them until they are second nature.

Final Performance Tips to Keep in Mind for the Suzuki Player 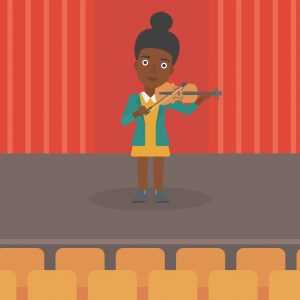 Phones ring, pagers beep, and circuit breakers blow out lights. There’s nothing new under the sun, even if it is new to your child. Musicians, just like workers in any other field, pick up where they left off and keep on playing. Maybe it’s better to start over – go ahead. But don’t dwell on mistakes.

Just say, “Okay, it happened and I’ll know what to expect the next time.”  Of course, if there is a real emergency, don’t just play through it. Stop, figure out what to do, and stay safe.

But for other issues that come up, like a surprise cell phone rock anthem or a total mind blank, stay calm. You will survive. It’s natural to have a glitch every so often, and it’s all part of the Suzuki performance learning experience. You are part of a Suzuki team. You are prepared for performance, and you know what to do.

Suzuki Violin: A Balanced Approach to Studying the Violin

Music Lessons for Kids: How Young is Too Young?

Siblings in the Suzuki Studio

How To Get The Most Out Of Live Performance Backing Tracks- 10 Tips To Help
Jul 18 2016- POSTED BY Louisa Danielson Tags: Performing, Suzuki, Suzuki Violin   zero comment

Louisa Danielson, B.S. Music, is a contributor to the Musika blog.