Learning how to play scales is probably not what most beginning guitar students think about when they dream about playing the guitar. Many musicians and non-musicians alike see scales as boring exercises that are good at wasting time and not much else, but this couldn’t be further from the truth. Without proper music instruction, massively important material like scales, chords, and arpeggios are often never fully explained, and this is probably why scales get such a bad rap. In this article, we’re going to show you not only how to follow a simple guitar scales chart, but we’re also going to tell you what scales are and why they’re so important.

Why Scales Are Important

Scales are important for many reasons, but chief among them is that they can help us understand music theory. For example, playing a simple one-octave G Major scale provides a window into not only every note in the key of G, but every chord within the key as well. Chords, keys, and scales are all built off of simple music theory formulas, and understanding how they work can help increase our knowledge of music and prowess on our instrument. If you’ve worked with a guitar teacher who never explained the connection between scales and music theory, then you shouldn’t be faulted if you viewed scales as nothing more than guitar exercises. 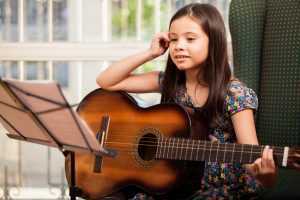 It’s also important to know and regularly play scales because they can act as powerful exercises that have been proven to improve rhythm, dexterity, muscle memory, and finger strength in a musician. When a student regularly plays scales to the slow, steady click of a metronome, every aspect of their musicianship improves. For example, if you’re a guitar player who struggles with rhythm, memorizing a few simple scales and playing them to a metronome should help you tremendously. Scales are prime occasions to work on things like alternate picking and mastery of playing 8th and 16th notes and triplets.

Mastery of scales has the power to transform musicians into confident writers and improvisers with the ability to perform in any key in a variety of styles. There’s no better way to learn how to write a riff or improvise over a blues chord progression than to memorize pentatonic and blues scales. Scales help students become well-rounded musicians with access to powerful tools and ideas that their scale-less counterparts don’t possess. There’ve been many incredible musicians out there with no formal training as far as memorizing scales go, but the argument to purposely not learn how to play scales doesn’t really hold up when you consider just how much they can do for your musicianship.

Unlike instruments like piano, clarinet, or saxophone, guitar players have the advantage of being able to use the same fingers and shapes to play various scales and modes all over the guitar. Think of it this way: When guitar scales don’t use open strings, the sequence of fingers and distances between frets can be copied and pasted at any location on the guitar. This means that memorizing a few simple scales translates to knowing how to build scales anywhere on the guitar. That’s powerful stuff. 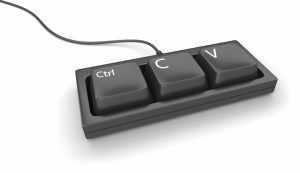 To know how and where to play scales on the guitar, you’ll need to at least be familiar with the note names on the 6th string. This shouldn’t be difficult. Starting with the note on the open E string, the note names move up fret by fret. Remember, flats and sharps share the same fret location. For example, the 4th fret is the location of both the Ab and G# notes. If you learn to follow a simple guitar scales chart for a G major scale on the third fret for example, the same fingers and intervals between notes can be applied up a fret to the key of G#/Ab or any other location so long as open strings aren’t used. If you’ve ever used a capo, that has a similar effect.

Now that we’ve covered why scales are so important for guitarists, let’s break a few scales down and teach you how to play them.

Mastering a simple blues guitar scales chart will help you learn how to speak the musical language of this profoundly influential style of music.

Major scales, which are also known as Ionian modes, are scales that sound full, bright, and complete. It’s important to memorize at least one simple major scale shape on the guitar to be able to improvise and write within major tonalities. We’re going to show you a guitar scales chart for the most basic version of a major scale here, but feel free to branch out to more extensive versions when you’re ready.

There are three different types of minor scales: natural, harmonic, and melodic. To keep things simple, we’ll show you how to play the natural minor scale today. Minor scales and tonalities sound somber, deep, and morose. All guitarists should get familiar with at least one simple minor scale shape.

A musical mode is defined as any sort of scale with an added set of melodic characteristics. Like we mentioned before, the major scale is also known as the Ionian mode. Composers and songwriters select specific modes to use in their pieces of music because each mode has its own unique character and sound. We’re going to describe each mode as well as the formula of how to build it in terms of whole and half steps. On the guitar, one fret is equal to one half-step.

Locrian – The Locrian mode features the most dissonance out of any of the modes.  HWWHWWW.

To adapt any of these modes to a guitar scales chart, simply write out six lines and place numbers over each line to represent where the notes are played on the guitar’s fretboard.