A catchy guitar riff has the power to stay in a listener’s head for decades. Riffs from songs like “Daytripper” by the Beatles and Black Sabbath’s “Iron Man” are practically institutions within popular music because they’re so well-known and influential. Writing guitar riffs isn’t easy, but we can learn some basic scales, techniques, and theory to help give us an idea of how to get started. In this article, we’re going to help you write your own riff.

What Is a Guitar Riff? 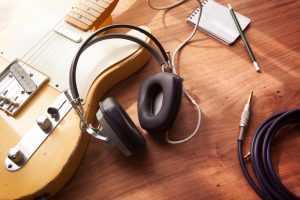 Riffs are catchy melodic lines that give the listener something to grab onto and remember, as opposed to chord progressions, which exist in music to provide predictable and structured harmonic content. Listeners almost always remember riffs but rarely remember chord progressions. Riffs can be played on the electric and acoustic guitars as well as the bass guitar.

Like so many other things in popular music, writing guitar riffs is an aspect of songwriting in popular music that grew out of the blues music tradition in America at the turn of the 20th century. Early blues riffs were written to match the phrasing and character of the human voice. Simple guitar licks that repeated over and over again laid the foundation for heavier and more intricate guitar lines that were developed in 1950’s rock and roll music.

Guitar riffs now largely shape popular music around the world. Foster The People’s breakout hit “Pumped Up Kicks” features one of the catchiest guitar riffs in all of popular music, and when most people think of this song, they hear the riff before anything else. Now that we’ve talked a little bit about what riffs are and where they came from, we’re going to give you some tips on how to write your own.

Alternate Picking With a Metronome 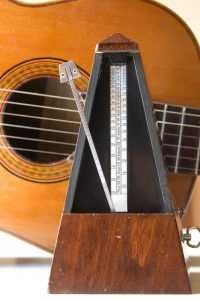 If you’re interested in writing guitar riffs, you should invest plenty of practice time to learning how to implement alternate picking into your playing. Alternate picking is when we pick singular notes of music down and then up rather than just picking down or up repeatedly. Correct playing technique is used when guitarists use alternate picking in their everyday playing without conscious thought or effort. This picking style is superior to just picking down repeatedly because it harnesses the natural momentum it takes to get your hand back to its original down-picking position. To start learning how to play with alternate picking, pick up and down on the open strings of your guitar to the click of a metronome. In fact, you’ll want to get nice and cozy to the idea of practicing and writing music with the help of a metronome.

Metronomes help to tighten up our playing and to give us an idea of where the beats are within a piece of music. Many beginning musicians might not know this, but practicing to a metronome essentially mimics what you’ll be doing in the studio when you decide to record your own music. Engineers have artists play to the click of a metronome because it keeps musicians on track, and because it serves a sonic roadmap that tells them where you’re at in the song. Metronomes are your friend.

We recently released an article of guitar scales charts on the Musika Lessons blog, so if you haven’t seen it yet, please check it out for helpful visuals on basic scales. We’re going to show you how to play some more complex 3-octave scales in this article. Scales are the bedrock of guitar riffs, and knowing how to play a few simple scale shapes around the neck will help you with writing guitar riffs that are compelling and catchy. You don’t need to master simple scales before you attempt to write your own guitar riffs, but knowing what scales are and what they do will absolutely help you become a better writer and musician.

Essentially, scales sequentially outline the notes in a particular key of music. In the key of G major for instance, every note in the scale represents the content found within the key: G-A-B-C-D-E-F#. Arranged in certain ways, these notes also form the chords within the key. The very stuff you’ll use to create a riff within a key of music is the same well the singer, bassist or pianist will draw from to create their parts within a song.

In theory, you could forgo learning scales and attempt to write riffs on your own out of the context of scales and keys, but memorizing a few basic scales will give you not only the knowledge of what notes to choose from for writing music, but can also help you hone in your rhythm and picking skills as well. Plenty of phenomenal songwriters knew nothing about scales and proper playing technique when they wrote riffs on guitar, but it’s a good idea to give yourself every advantage you can while writing music.

It’s important to note that any scale or riff can be moved anywhere on the guitar as long as you remember to keep the distances between frets the same. Other instruments like ones found in the brass and woodwind families feature note systems that are far less linear and much more difficult to play. Like we said before, if you take the time to memorize a few simple scale shapes, then you’ll be able to write guitar riffs in any key or mode you choose.

There are many different blues scales to learn, but today we’re going to show you how to play the 3-Octave E minor shape. Memorizing this scale will help you with writing guitar riffs for rock and blues music in minor keys.

This scale can be moved up and modified to be played anywhere on the guitar.

Now, let’s move on the 3-octave major scale shape. Like the blues scale we just covered, this scale can be moved and adapted to be played in any key on the guitar. If you run out of room up the neck of the guitar, simply play all the notes you can before descending or adapt the scale into a 2-octave major shape. You can borrow notes from this scale to write riffs in major keys.

All scales are actually defined as modes in music. In our recent article about basic scales, we talked about what modes are and how to build them, so head over there if you’d like a more in-depth discussion about the world of musical modes. Each mode comes equipped with its own unique sound structure, and we can select certain modes to write in to convey different moods in music. For example, if you’d like to write a killer blues riff, you might want to consider memorizing the Mixolydian mode shape. This mode identically mirrors the major scale other than the seventh scale degree which goes down a half step. In the key of G, the notes in a Mixolydian mode are: G-A-B-C-D-E-F-G. Some modes, like the Locrian mode, are extremely dissonant and largely won’t be useful for writing guitar riffs in conventional popular music.

The process for writing a great guitar riff will differ greatly from person to person, but we believe that every songwriter should have a few essential things present in the room when they sit down to make music: A pencil, some paper, and a recording device. So many great musical ideas are lost because songwriters simply forget to jot down and record their work. Giving yourself ways to document what you do during your songwriting process will help you remember your work. 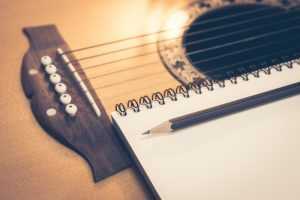 How you write your riff will depend on your unique musical situation. Are you working on writing material with a live band? Then you’ll need the musicians you work with to play certain sections of music over and over again while you put your musical intuition, creativity, and knowledge of scale and mode shapes into practice. If you’re writing alone, it’s a good idea to write guitar lines over simple chord structures. You can use songwriting software like Garage Band to record yourself playing chords, or to generate synthesized chord progressions.

Whatever your situation is, great writing occurs when someone gives themselves the time and space for it to happen. Like any artistic pursuit, the songwriting muscle is one that develops over a long period of time and with great focus and energy. Writing guitar riffs that are unique and memorable can happen for you if playing simple scales and chords on the guitar has become second nature. We recommend mastering basic guitar technique before attempting to write, but you certainly don’t have to.

When it’s all said and done, there’s no recipe for writing guitar riffs, but learning to play in rhythm, memorizing scales, and putting time and energy into your writing practice is a great place to start. .