In our previous installment, we looked at my personal favorite group of hand drums, the frame drums. Now we will discuss the hugely popular family of goblet-shaped drums. This group of hand drums is natively widespread throughout North and West Africa, the Middle East, and Eastern Europe. We will close with Asian examples that are generally less well known in the West.

For the purposes of this article, I am going to include some drums such as the Nigerian (and later Cuban) batá, which have traditionally been described as hourglass-shaped. I think the distinction is subtle, and as we’ll see particularly in the next installment (where we’ll discuss cone-, barrel-, bowl-, sphere-, and cylinder- shaped drums), these shapes are often not clear-cut. But without further ado, let’s dive right into the goblet-shaped hand drum that is probably most familiar- at least to most here in the United States- the West African djembe.

The djembe is a large, heavy hand drum carved from a log of hardwood, and has a single head, typically of goatskin, which is attached by an elaborate iron ring and rope system. It is believed to have originated in the Mali Empire, thus probably dating at least back to 1230 CE. The region of the Mali Empire covered parts of today’s nations of Mali, Burkina Faso, Senegal, Guinea, Ivory Coast, and Gambia. This enormous distribution is perhaps the reason why- for many in the West- the djembe (and its music) is regarded as virtually synonymous with African music. (Of course, it should be pointed out that Africa is an enormous continent with an extraordinary diversity of culture, and therefore, music). The djembe was introduced to the rest of the world largely due to the efforts of the Guinean dancer, writer, musician, and politician Fodéba Keïta who toured the world with the troupe he founded, Les Ballets Africains. Today the djembe is hugely popular, and has become a staple feature of beginning music programs and community centers.

Typical of goblet-shaped drums- as with most hand drums- the technique of djembe playing revolves around its ability to produce sharp contrasts of pitch: a very low tone from the center of the head, and various high pitches from the edge. In addition to a variety of decorations, the djembe may be augmented by one or more ‘sege sege’ (other names exist as well), essentially a fan-like piece of sheet metal affixed with metal rings that rattle or jingle with the strokes of the drum. In traditional practice, the djembe is usually played in an ensemble of one to several, along with one or more dunun (a cylindrical double-headed drum) players. Usually there is a lead, solo djembe player, and the others play a repetitive accompanying figure. The solo part may be quite rhythmically complex.

And here is a traditional ensemble from Burkina Faso- note the dramatic syncopations and polyrhythms of the lead drummer:

The Doumbek (and its variants) 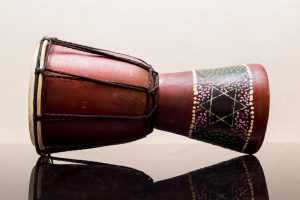 Doumbek, darbuka, zerbaghali, tablah (and seemingly every conceivable spelling variance of those) are all names for the goblet-shaped drum that, along with the various frame drums mentioned in the last installment, dominates the percussion of the Middle East, as well as North Africa, parts of Eastern Europe, and the Caucasus. Generally smaller than the djembe, it is traditionally made of a ceramic shell with a thinner skin head than the djembe, but materials used to make a doumbek vary more than those of the djembe: a relative few are wood (the Persian tombak or zarb is a very distinct version that is always carved from wood), and many are metal, from the heavy spun aluminum of those made in Egypt, to the thin, light stamped metal of Turkish models.

Shells are often elaborately decorated with inlay, paint or glaze, and other techniques. Heads may be skin, commonly goat, sturgeon, or ray; or frequently now, synthetics such as mylar. The Persian tombak is headed with sheep or goatskin. Broadly speaking, the Egyptian style has a rounded rim, ideal for the finger rolls typical of the style, while the Turkish style has a squared rim, conducive to the finger snap techniques commonly employed by players of that style. Natural skin heads (as well as synthetics that imitate skin) are typically glued on the shell, while the common mylar heads are affixed with a bolted rim of metal. The head of the tombak is typically glued and tacked.

An interesting feature of most doumbek-type drums is the position in which it is held. Typically, the drum is laid across the leg opposite the dominant hand, allowing the dominant hand access to the low tone from the center of the drum, as well as the high tones from the edge, while the other hand primarily accesses the edge sounds. It is common for many pitches to be produced by stopping the head at various points, and a variety of roll techniques are characteristic.

Here is an unusual video, with a variety of percussion instruments played by Levent Yildirim, including two ceramic doumbeks, which enter at the fifty-five second mark. Yildirim puts the instruments through the paces of just about every conceivable technique with impressive virtuosity.

For the zarb, here’s an equally impressive performance from the traditional Persian group, Shahrzad Ensemble. At about the 2:47 mark, percussionist Naghmeh Farahmand begins a solo that utilizes an astounding range of techniques:

The Batá are drums originally of the Yorùbá, of modern-day Nigeria. As mentioned above, these are often described as hourglass-shape, but I think they fit in our category here well enough! Originally, the instrument had a strictly sacred role, but after its migration to Cuba, Puerto Rico, and some parts of the Southern US during the slave trade, it began to be used in secular music, and has taken on a large role in Cuban music in particular. In our next installment we’ll cover more of what are known collectively as “Afro-Cuban” drums.

Unlike the others we have discussed, the Batá are double-headed drums, one smaller than the other. Shells are wood and heads are of skin. Cuban versions are frequently adorned with small bells or other jingling devices. They may be used in ensembles using various sizes, or one player may play several simultaneously. In Nigeria, it is common to play one head with the hand and the other with a stiff leather strap, while in Cuba both heads are typically struck with the hands.

Both from Thailand, these two drums have distinct forms and playing styles. The klong yau, which means ‘long drum’, is just that- a very long drum carved of wood, with a water buffalo head. A small disc formed from rice paste and iron filings is affixed to the center of the head, affecting the pitch (we’ll see this again in several drums of India in the next installment). Closely related instruments are found in Southwest China and Burma (Myanmar).

Here is an ensemble of the instruments:

The thon (also known as thap or thab) is an interesting one, as it is played in combination with a frame drum called ramana. Together they are known as thon-ramana, with the thon played in the familiar across-the-lap manner, while the ramana is held upright on the leg with the left hand.

Here is a brief demonstration of thon-ramana:

Here is an example of the thon played in a pair, in a playing position we have not yet encountered (in fact, this is my own first exposure to this):

The Malaysian gedombak (notice the similarity of name to doumbek) is another carved wood drum with a goatskin head. It is typically played in pairs (two players), one larger (known as ‘mother’) and one smaller (‘child’).

In this example, we’ll see the two gedombak players on the right initially (the camera pans around the ensemble quite a bit). Notice how the players alter the pitch of the drums by covering and uncovering the open end (a technique occasionally used with the doumbek as well):

Probably no survey of goblet-shaped drums (or any other) could hope to be exhaustive, but I hope this has whetted your interest in this fascinating family of hand drums. Most of these are widely available in both traditional materials, as well as modern manufactured versions, and are quite affordable. Excellent additions to your percussion arsenal!

Setting Up a Drum Set