The world of hand drums is a vast one indeed, with distinct types emerging in all parts of the world as some of nearly every culture’s earliest instruments. But what is meant by the term ‘hand drums’, you might ask. Quite simply, ‘hand drum’ refers to any drum that is primarily played with the hands or fingers, as opposed to some kind of stick, mallet, or other beater. Furthermore, we’re going to use a strict definition of drum here- i.e., a shell of some kind with at least one membrane striking surface- to avoid any confusion with instruments that are not proper drums, and yet are sometimes called drums, such as ‘slit drums’ (or ‘log drums’), cajóns (though some contemporary versions add drumheads, for a hybrid instrument), or the currently very popular ‘Hang drum’. These are all wonderful instruments, and may be played with the hands, but strictly speaking, they are not drums! 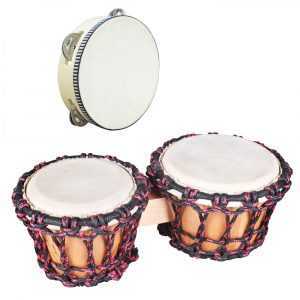 One could easily categorize the world’s hand drums by region, but I think it will be interesting to attempt to categorize them by type, in order to show how drums evolved as they spread through a region, and also how very similar types of drums may appear in far-flung places without there necessarily having been a direct connection. Within each group, I will then discuss them roughly by region.

Broadly speaking, we can break hand drums down into groups based on general shape, roughly goblet-shaped, barrel-shaped, and frame drums. For this first installment, I’m going to begin with what may be the oldest family of hand drums, the frame drum.

A frame drum is one in which the diameter of the head (the strikeable membrane) is greater than the depth of the shell, AND the instrument is hand-held (this second feature is important to distinguish frame drums from many snare drums, tom toms, timbales, etc. for which the first distinction may be true). While some frame drums are typically struck with some type of beater (the Irish Bodhrán is a notable example, as well as many Indigenous American and Asian types) most are struck with the fingers. Most have round heads, but square-shaped and other polygons exist as well. In the West, our most familiar example of the frame drum is the common tambourine with its many variations. It has been postulated that the re-purposing of the grain sieve led to the creation of frame drums.

Frame drums are perhaps most deeply associated with the music of the Middle East, North Africa, and the Caucasus, though they appear throughout the world. These frame drums are known by a large number of names that may refer to different types from country to country, among them: tar, daff, doff, deff, riq (sometimes spelled riqq), muzzar, and more.

These hand drums are made in a wide variety of diameters and depths, and the sound of the drum is frequently augmented by small cymbals (jingles or zils) as in varieties of tambourine such as the riq and muzzar, small bells, metal rings affixed to the inside of the head (the latter two in the ghaval and the doira of the Caucasus and Eastern Europe), or even snares (as in the Bendir of North Africa). Shells are traditionally made of wood (with some contemporary metal or synthetic models), while heads vary from goatskin to fish skin such as sturgeon or skate (and of course, contemporary synthetics). Shells are often vividly decorated with paint or inlay.

Uniquely, Middle Eastern tambourine technique involves playing directly on the zils, as well as on the head of the drum. People familiar only with the typical Western ‘shake and slap’ kind of tambourine playing are often quite surprised at first observation of a skilled riq player.

Here is an excellent demonstration of the wide variety of techniques that may be employed on the riq, as well as of the vast timbral possibilities the instrument offers:

Here’s a lovely Turkish example of the ring-jingle type, interestingly interspersed with a demonstration of the making of the instrument:

In South India, the kanjira is constructed of wood, with a single pair of cymbals (jingles), and a lizard skin head. A distinguishing feature of the kanjira is the fairly low tension of the head, which allows for a great deal of pitch bending (an interesting characteristic of a lot of Indian music in general) with one hand, while the other hand strikes the drum.

Here’s a quite virtuosic kanjira solo:

While frame drums were depicted in Western European art at least until the late Middle Ages- held in the manner of Middle Eastern ones- they largely waned in use after that time. In Eastern Europe, forms like the Turkish example above are common. The adufe is a square, double-headed frame drum found in Portugal, Spain, North Africa, and Brazil.

Here is a Portuguese group of singers, accompanying themselves with these drums:

The tamburello of Italy is a very large, low pitched tambourine with many jingles. Here is an excellent demonstration of its techniques:

A variety of tambourines are common across Central and South America. One of the most notable is the pandeiro of Brazil. It strongly resembles our more familiar tambourines, but has some interesting distinguishing features; not only is it much heavier, it adds washers between each pair of jingles for a much drier sound. The playing technique is quite complex, and it is not unusual for the player to incorporate showy elements such as tossing and flipping the instrument.

Here’s an excellent solo that shows the breadth of playing techniques, including every conceivable way to achieve a roll!

While there are many more, and some from parts of the world where the frame drum plays a somewhat lesser role (such as East Asia and Subsaharan Africa), we’ve covered the majority of the most popular frame drums. As noted before, in future installments we’ll delve into the goblet-shaped, barrel-shaped, and other types of hand drums. Happy drumming!

Accessories Every Drummer Should Have