When thinking back on early music experiences, we often reminisce about the elementary school days. Those memories could be filled with costumed performances, recorders, games and dances, and a myriad of other things. What our memories don’t often reveal is the training and pedagogical approaches by which our elementary and early childhood music teachers taught us.  There are many pedagogues elementary music teachers draw inspiration from for music teaching and learning. One of which is Zoltan Kodály.

There are many preconceived notions about “The Kodály Method” and how it is used in music classrooms by music teachers. Often confused as “the one with the hand signs” (that weren’t even developed by Kodály, more on that later), there is so much more to this approach. The inspiration Kodály teachers find in Zoltan’s teachings is a starting point for facilitating students’ music learning in each and every individual, situated, learning environment

1. First and foremost, the Kodály approach is sequential

One of my great Kodály mentors says, “sequence is life, life is sequence.” This is particularly true when it comes to education, and is to essential music education. The spiral curriculum, based on a cognitive theory by Jerome Bruner, is another way to think about a sequential approach. Essentially, each concept builds upon one another, with early learning serving as the foundation for more complex concepts. Think of it in terms of a staircase: without the bottom step, you would not have a place to put the second, and so on and so forth. Music education functions very much the same way.

Let’s look at an example. In a Kodály inspired sequence, one of the very first concepts introduced in Kindergarten is “steady beat.” It is the fundamental musical concept by which all other music learning is built upon. Once a student has mastered steady beat, they can go on to read, perform and create rhythm patterns, melodic patterns, purposeful and creative movement, and play an instrument alone and with others. Without the foundation of a steady beat, it would be very difficult to do any of these things, or any other musical activity.

2. Kodály inspired teachers use repertoire from the folk song tradition.

The Kodály approach was developed by Zoltan Kodály, in Hungary, post war era, when the country was trying to rebuild its identity. Without going into too much historical context (that’s a

completely different article), Kodály and his friend Béla Bartók were ethnomusicologists as well as composers and educators. Ethnomusicology is the cultural context of music. The cultural context Kodály and Bartók were interested in, was their own “mother tongue”, Hungarian. As they collected songs from near and far, they were able to analyze and categorize them by rhythmic and melodic elements (among others). This became the basis for Kodály’s pedagogical sequence.

A Kodály sequence in America functions much the same way. The folk song repertoire dictates the pedagogical spiral curriculum, beginning with the simple and building toward the complex. To give it life, think of this. What do you hear children sing or call on playgrounds all over? “Na, na, na, boo, boo.” Found in many children’s songs, that three-note motive makes up the fundamental call from which many Kodály inspired teachers build. In elementary school music class, many young musicians read and perform rhythm patterns containing “ta” and “ti-ti.” This is another example of a fundamental element, in this case rhythmic, by which many Kodály inspired teachers begin their spiral curriculum

3. Kodály inspired teachers use tools, like rhythm and solfege syllables and hand signs as an aid for teaching music literacy

When you first hear a Kodály inspired teacher sing, “do, re, mi,” I’m sure many of you are transported back to your childhood days of watching The Sound of Music with your family. As it turns out, those syllables are three of seven that designate pitches, collectively called solfege. Many musicians use solfege as a tool for reading melodic content, although the Latin syllables are more readily used by singers to read a melody prior to singing text. Since a child’s first instrument is their voice, singing is often the fundamental component to an elementary music classroom. This is certainly the case in Kodály inspired classrooms. 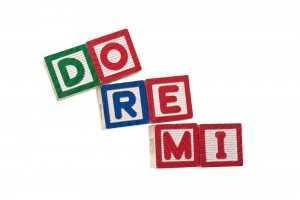 Like any good educator, Kodály inspired music teachers use a great deal of tools that aid in music teaching and learning. In addition to solfege syllables, rhythm syllables (like “ta” and “ti-ti”) are an important tool to promote music literacy. There are two main types of rhythm syllables that are used in the music classroom. The first is a system based on note value. An example of this system would be the syllables developed by Chevé. In this system, the quarter note is “ta”, the eighth note “ti,” etc., no matter where the note is placed in a rhythm pattern. The second system of rhythm counting is a beat-based system.  Examples of this system include the “Ta-ka-de-mi” system, where the beat is always “ta” regardless of what its note value is, and the Gordon system, where the beat is always “du.” The most readily used example of a beat-based counting method is traditional counting (i.e. “one and two and…”). Although many musicians transfer to the traditional method of counting, they often begin their music education in elementary school with one of the other systems above, which highlights either note value or beat function.

Perhaps the most stereotypically “Kodály tool” is the use of hand signs when singing solfege syllables. Despite common misconception, Zoltan Kodály did not develop the hand signs used to accompany solfege; Joseph Curwen did. Kodály simply adopted this tool, like those listed above, to his pedagogical approach in order to aid in developing children’s music literacy. With the addition of the hand signs, students have an aural (singing and listening), visual (reading notation), and kinesthetic (using hand signs) component to music literacy.  These three modes of representation (aural, visual, and kinesthetic) are part of Jerome Bruner’s cognitive theory from which the spiral curriculum comes. Bruner highlights enactive (action), iconic (visual), and symbolic (language) representation as important attributes to children’s learning. The rhythm and solfege syllables, along with the hand signs and clapping rhythms, complete the triad needed to facilitate children’s music literacy

4. The Kodály approach emphasizes purposeful play and exploration through activities like singing games and play parties

Play is how children work. Regardless of what we are trying to teach children, particularly young children, it is essential for children to have the opportunity to play and explore before focused, high concentration learning takes place. This is one of the main tenants of the Kodály approach, and most elementary music pedagogical approaches. If you walk into a music classroom, there are times where it may seem chaotic or unfocused to the naked eye. So much learning takes place in ways that don’t feel like learning to students, which is the basis of their appeal.

Take for example, a game many children play inside and outside of the music classroom, “Ring Around the Rosie.” There are so many reasons to play this game, and not always for inherently 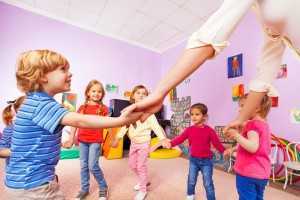 musical reasons. First and foremost, making a circle can be tricky. When it’s time to move in a circle? That is really tricky. Not only are students learning about self-space and shared-space, they have to think about what direction to move in, which is the opposite of those directly across the circle. Add to that the singing (of those three fundamental pitches we highlighted earlier), walking to a steady beat with the correct spacing so they don’t run into anyone, and hearing the final motive and home note when it’s time to “all fall down.” That’s a lot of stuff in a little nursery rhyme!

The moral of the story: even if students are “unsuccessful” during an exploratory period, playing and working with others is how they come to know the ways of the world, including the musical world. Kodály inspired teachers use a variety of games, folk dances, and play parties (another traditional genre of singing games and dances) to introduce, explore, and reinforce musical concepts with their students. This way of teaching and learning allows for students to not only be invested in their learning, but to find joy in music making experiences

5. A Kodály inspired pedagogical sequence lays the groundwork for incorporating improvisation, composition, creative movement, and many other musical possibilities

So far I have provided a very small amount of context and given examples of the plethora of tools that Kodály inspired teachers use in the music classroom. I find it important at this juncture to emphasize that while the Kodály approach was originally developed to aid in strengthening a nation’s cultural identity through music literacy, it does not end there. Although its inception was several decades ago, in a completely different country halfway around the world, a Kodály inspired philosophy and pillars of music education are most certainly applicable to modern day music education. 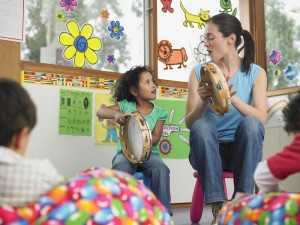 By building a strong foundation of musical literacy through aural, visual, and kinesthetic representation, young musicians are well equipped to not only exhibit music learning, but create music independently of a teacher.  Skills learned through a Kodály inspired sequence lend themselves to improvisation and composition, with either a “by ear” model, or with actual pen to paper. Understanding of musical form and interpretation can be extended to choreographed creative movement and instrumental accompaniment. These are only two examples of what a strong foundation can lay for lifelong music participation and creativity.

Now, to be sure, these five points outlined above are not exclusively unique to the Kodály approach or Kodály inspired music educators.  I would argue that all good pedagogy includes a sequential curriculum, whether in the music classroom or otherwise. Many music teachers derive curricular concepts and lesson material from a folk song repertoire, either exclusively or with the addition of other types of music. Solfege and rhythm syllables and hand signs are readily used in music classrooms everywhere in the world, not strictly elementary nor Kodály inspired classrooms. And finally, curriculum, music or otherwise, often does and should include both an exploratory phase and opportunities for students to exhibit their understanding of curricular concepts through higher order thinking skills.

My hope in outlining these tenants of the Kodály approach is to provide context and clarification to the philosophy in general terms. The Kodály approach is more than just “do-re-mi” or hand signs, it is a source of inspiration for music educators to model their curriculum and teaching to facilitate music literacy and creativity. This is in no way a comprehensive list, nor a complete explanation of how the approach evolved or is implemented, but will hopefully prove as a starting point for those who wish to know more. Every good sequence has to start with some sort of foundation.

The Truth About Elementary Music

Suzuki Violin: A Balanced Approach to Studying the Violin

1 thought on “The Kodály Approach – More than Hand Signs”