When I was young, there weren’t a lot of organized activities or private lessons available for children in the three to five year old age range. Swim classes, dance classes, gymnastics, and a slew of other options for youngsters seems to be a more recent phenomenon, at least to this original small town girl. While the more overtly physical activities have gained momentum over the years, why not consider early childhood music education? 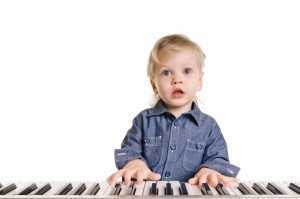 There is a world of opportunity for our youngest kiddos to participate in music making from the earliest ages, birth even, from Suzuki inspired lessons to an exploratory early childhood music and movement class. Now I know what you may be thinking: “Music? For a newborn or a three-year-old?” Absolutely. Think of the ways our children learn: from their environment, by imitating others, by exploring the world around them, and learning through trial and error. Although these characteristics may not be exclusive to musical experiences, they are inextricably linked to the way music and learning takes place for our youngest musicians. There are many reasons our children should participate in a rich musical environment from as early of an age as possible. Here are four for you to think about.

1. Children learn from their environment

One of the first questions I receive from parents who are contemplating music education for their younger child is whether or not it is too soon. Well, it depends. If you are talking about a three year old who you wish to begin formal piano instruction, I’m not sure his fine motor skills are developed enough to accommodate the proper technique needed to play the instrument. Additionally, his emotional maturity, and size alone, could be major roadblocks. Another issue is purely attention span. A one on one lesson where a student is asked to rote memorize note names on the lines and spaces of the staff is not going to hold a three-year-old’s attention for more than three minutes, and may be a concept simply too abstract for that age group. But what if he were playing a game with other three-year-olds? Not only would it hold his attention for much longer, but he would also learn from watching and observing other children. 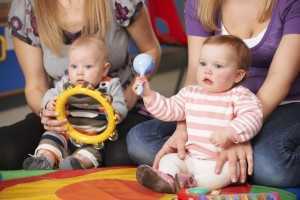 I have taught music classes for children as young as 0 years old. Yes, a music class for newborns and their parents. I know what you’re thinking; do those infants even know what’s going on? Well, they obviously can’t verbalize or show us the steady beat, but they can experience it in their mother’s arms and by watching other babies bounced in their fathers’ laps. The point is, so much learning is from our environment. Social cognitive theorists study how we learn from our environment, through modeling and positive and negative reinforcement of others. Taking this into account, group music lessons or classes are inextricably valuable for our youngest learners who are just beginning to learn their place in the musical world.

Obviously these very young students who are infants or toddlers are not going to be playing a Bach Sonata or composing rhythm patterns after a series of group musical experiences.  However, the very nature of early childhood music, and early childhood in and of itself is play. It is often said that play is children’s work, and this is certainly the case with play in early childhood music education. Initial experiences are just that, the beginning, the foundation, the place from which inspiration and curiosity stems. The earlier our children have the opportunity to be immersed and explore within a rich musical environment, the more musical vocabulary they will develop. 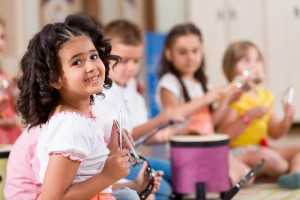 Let’s go back to the three year old whose parents wish for him to begin piano lessons ASAP. Indeed, a child at this young age will not be able to play four octave scales in sixteenth note patterns, but he could be placed with a teacher who understands his current stage of cognitive development and focuses on foundational skills in music. This can be done through a number of ways, whether game based or purely exploratory. These early experiences provide an entry point from which young musicians blossom.

If you were to take a peek inside a kindergarten music class, you would see this exploration model first hand. Students learn songs, play games, tell stories, and imagine different ways to express themselves with and through music. Much like learning a language, these students are learning to speak before they read and write.

We know from research that the early years in a child’s life are the most critical for development. Although this may be a sweeping generalization, it has broadly been shown that as time goes away our brain picks and chooses what attributes to keep through the process of pruning. However, the brain has great plasticity, and we can certainly continue to learn new skills at various stages of life. But just as it is said that learning a foreign language is easier as a child, the same is true of the musical language. 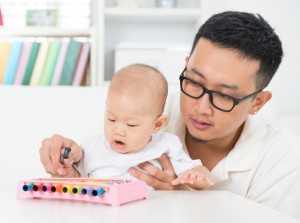 Think of the ways a child learns to speak. She listens, she explores, she babbles, she imitates, she observes to make connections between sounds and symbols. This goes on and on until she finally connects the word “ball” to the round rubber thing the dog catches and eventually forms her mouth correctly to make the sound. The same thing happens in music. She listens, she explores, she experiments, she imitates, and begins to make connections between high and low and loud and quiet. That is, as long as she has had a musical environment or model from which to explore and imitate.

I have had many students where their first musical experience is in my kindergarten music class. I have also had many students who come from a home where there is music ever present, either by a parent or a sibling or otherwise. As the teacher, I can often tell which student is which. Those who have had a musical foundation prior to my class are ready to learn the words and read and write the language, but those who haven’t still need an interpreter.

I’m going to go out on a limb and suggest that most parents do not enroll their students in activities for the sake of the activities themselves. You don’t sign your child up to play soccer so they can go on to win the World Cup, just like you don’t sign your child up for violin lessons so they can be the next Joshua Bell. That may be an exciting benefit, but hopefully not the basis of the appeal. The real reasons are so that children can come to know their place in the world and learn skills that help them interact with others. But also, so they can come to know themselves.

A continually toted benefit of music education is that it teaches students hard work and dedication. By playing an instrument or performing in an ensemble, they learn to make goals, strive for excellence, and work hard. That’s all good and true, but music education is not the only activity that helps those things. What makes music education, and specifically early childhood music education unique, is the process. 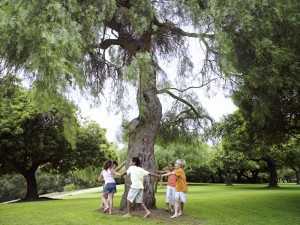 By observing others in a rich musical environment, our youngest musicians not only build vocabulary or learn from their peers, but they begin to develop their own musical tastes and personalities. This helps them find not only an identity as a young musician, but a young human being. Playing a game of “Ring Around the Rosie,” a kid might learn to sing a simple melody, walk in a circle, and “all fall down.” But he also learns that Johnny pulls and makes the circle cave in, Jane holds his hand too tight so he doesn’t want to stand next to her again, and Jude never “falls down” which ruins the game. But while he is making these observations, he is still walking to a steady beat, singing in head voice, and paying attention to form so he knows when to drop, all developing music vocabulary. Then, there is the whole host of extra musical renderings that take place in a music lesson that otherwise may not have transpired.

Early childhood music education is vital to a child’s development. It doesn’t matter whether or not they plan to play at Carnegie Hall or sing with the Houston Opera. These early experiences lay a foundation and develop a vocabulary so that they might come to understand the orchestra piece, or pick up on emotion in the opera, because they are a product of a rich musical environment. The vocabulary built through early experiences and explorations in a rich musical environment not only provides a foundation on which to build more complex musical concepts and skills, but gives our children the opportunity to develop the skills needed to interact with one another and understand themselves.

The Truth About Elementary Music

Encouraging a Love of Music Outside the Classroom

Music Lessons for Kids: How Young is Too Young?

Becoming a Music Teacher: A How To Guide

Where Can I Take Music Lessons?