In my previous post, I discussed the basic approaches to the construction of rock drum beats, focused primarily on a straight eighth note division of the bar, 4/4 time, and with an unchanging back beat (two and four on the snare). In this part, we’re going to look at some of the ways this can be further varied, and a bit about what seems to work and what doesn’t. 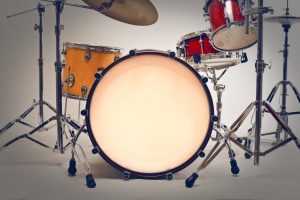 So let’s remain for the time being within the eighth note framework, with the ride pattern (high hat or ride cymbal most commonly) unchanged from before. What we have left to play with then is to vary the pattern of the snare drum. I’ll begin with one of the simplest and most common ways this is done, which is to simply strike the snare on all four beats. Here are a couple of common examples, with typical bass drum patterns:

Both of these rock drum beats were quite common, particularly in the rock and roll of the sixties, and remain commonly used (with many variations possible, of course) whenever a driving or ‘stomping’ kind of feel is desired- Think of the intro to Roy Orbison’s ‘Pretty Woman’, or the tag at the end of the chorus of the Rolling Stones’ ‘Get off of my Cloud’.

Back to Downbeats and Upbeats

But of course within our current framework, we have given ourselves eight different points in our measure to work with (the most basic of ‘basic rock drum beats’!). In spite of this, some of these possibilities tend to be rare. I discussed in part one the tendency- throughout the history of music, and across cultures- for rhythmic music to tend to assemble itself into ‘stronger’ and ‘weaker’ beats, and further, a tendency (operative word) toward low pitched sounds on strong beats (in the case of 4/4 time, one and three) and higher pitched sounds on the weaker beats (two and four). Again, this is a tendency, not a rule. But you’ll find that it is very rare for a drummer to, for example, play the reverse of this- snare on one and two, bass on three and four. This may be found as an effect or transitional pattern, but were it to be used as the basis for a song, it would simply sound a bit ‘off’ or confusing to most of our ears (of course you may find yourself seeking that effect). Far more common are elaborations of the backbeat tendency, which leads us to:

The double backbeat is the practice of doubling one or both of the backbeats by striking the snare on the ‘and’ of two or four (or both) as well. This practice was very common again in 60s rock (think the Beatles’ ‘I Want to Hold Your Hand’) and in particular, surf music (The Chantays’ ‘Pipeline’ comes immediately to mind). Here are a few typical examples of this:

And perhaps a bit more propulsive:

Here we double the fourth beat (and incidentally, you’ll hear a bit of those in the aforementioned Rolling Stones song as well):

And here we’ll add a little more forward motion through a bit of syncopation in the bass drum:

And speaking of syncopation, this now leads us to:

Another common technique of rock drum beats is to delay one of the backbeats by an eighth note. I believe that we could also think of this as a derivation of the double backbeat- in other words, a double backbeat with the main stroke missing. I say this because things can get a little murky once we get into the concept of ‘ghost notes’. More on that in a later installment!

Here is an example that interestingly is a rhythm common to traditional Middle Eastern drumming, as well as to a lot of contemporary electronic dance music and hip hop, usually at a pretty fast clip in both cases:

If we add a bass drum stroke under the delayed backbeat, it begins perhaps to take on a bit of a Latin feel:

In some (mostly older) funk music, we hear the fourth beat (or second backbeat) delayed instead.

And back to Latin feels, here is an interesting example of a derivation from a Brazilian beat, the bossa nova. The snare plays what is known as a ‘clave’ rhythm- more on that in a later post- while the bass drum simply plays ‘four on the floor’ (unlike a true bossa nova, which has a more complicated pattern in the bass). Note that while the other beats presented here have been single measure ones, this is a two measure pattern. Leave a comment if you recognize what famous song this one is from! (hint: it’s an ode to a star of early horror film, a pretty unlikely place for a Brazilian beat)

So as you can see, there is a lot still to work with, even within the limited framework of basic rock drum beats we’ve been using so far. And while we’ve also talked about some things that generally are infrequently used, remember that your own ear (and those of the people you’re playing with) is the final word on what you play in a given situation.

In installment three of this series, we’ll be looking at dividing the beat into three parts instead of two- the so-called ‘compound meters’- and the various styles and grooves that routinely utilize those rock drum beats. We’ll be talking about swing, shuffle, blues and more. In installment four and five, we will further open things up by exploring the role of the sixteenth note, and beginning to expand our ride patterns more. Until then, happy drumming!

Setting Up a Drum Set