In spite of the seemingly limitless variety one can find in rock drumming, there are also virtually ubiquitous commonalities. In this post, I’m going to break down the principles of how the most 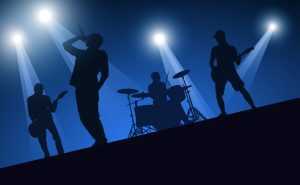 basic drum beats in rock music are put together, and a bit of history behind them. To begin, it is important to clarify what is meant by the terms ‘beat’ and ‘drum beat’, and the variety of ways the terms are used.

Just what is meant by the term ‘drum beat’?

Even in contemporary common usage, the term ‘drum beat’ can have various shades of meaning, which we’ll get to shortly- first we have to nail down just what exactly is meant by ‘beat’ itself. Fundamentally, beat refers to the underlying pulse of the music, and is often described as corresponding to the rate at which one might naturally tap her foot with the music. In classical music, it can be seen in the changes in direction of the conductor’s baton, which are usually (though not always, to the chagrin of many a classical musician) fairly distinct. It is considered the basic unit of time in a given piece of music, which is then divided into smaller units, and from which larger structural units emerge. When we speak of a ‘drum beat’, we are typically referring to the main pattern a drummer plays in a given song (which in most rock and pop will typically be treated as a written part, to be played more or less the same in each performance, as differentiated from that of a jazz drummer, whose job tends to be more fluid and improvisatory, though not without its own standard patterns). The terms ‘beat’, ‘drum beat’, and ‘rock beat’ are often used interchangeably to refer to this pattern, and this pattern is generally recognized as the backbone that articulates the ‘beat’- in the larger sense- for the listener (and the rest of the band).

Now that we have a concept of the word beat, we need to understand these three terms. Music rarely exists as a flowing, otherwise unstructured pulse, but rather organizes into units we call measures, or small groupings of beats (this concept is known as meter). We describe this meter in a given piece of music with what we call ‘time signature’, which is expressed by what is essentially a fraction: the upper note being the number of beats in a measure, and the lower being the type of note that gets the beat (half, quarter, eighth, etc). From this, we can see why the meter known as ‘common time’ is expressed as 4/4: four beats to the measure, with the quarter note getting the beat (four quarters equaling a whole). The vast majority of rock songs are in 4/4, and that is what we will be dealing with in this post. 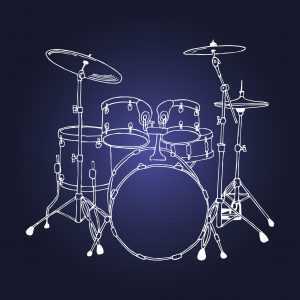 The beats in a meter fall loosely into stronger and weaker categories. Perhaps unsurprisingly, the strongest beat in the measure is the first, and is known as the downbeat. In 4/4 time, the third beat is recognized as having the next greatest strength, with the 2nd and 4th being regarded as ‘weaker’ (structurally speaking- in practice things get a little more complicated, as we’ll see). The final beat of the measure is known as the upbeat (in part, these terms come from conductor practice, in which the first beat of the measure is signaled with a vertical downstroke of the baton, while the final beat receives an upstroke). Furthermore, there is a tendency extending far back through many musical traditions of placing low sounds on strong beats, and higher sounds on weaker beats (in the accompaniment to melody).

Think of the classic ‘oom-pa’ sound; the thump-slap pattern of early country and rockabilly bass playing; the thumb-fingers pattern of folk guitar pickers, and many more examples.

In rock music (as well as most of the genres that fed into its creation) the ‘weak’ beats two and four tend to be specially emphasized: this is known as the ‘backbeat’. Typically, the backbeat is articulated by a strong snare hit. It follows naturally from these ideas then, that the lowest-pitched instrument of the drum set- the bass drum, of course- will generally center on or around beats one and three, and will almost always articulate beat 1.

The next thing we need to consider is what is known as the ‘ride pattern’. This is a (generally) steady, continuous timekeeping pattern typically played on the high hat or ride cymbal. The following illustration is of four basic ride patterns:

Numbers 1 and 2, the shuffle and the swing, respectively, are typical of the early days of rock and roll (as well as of jazz, r’n’b, etc.) While they are certainly still in use, the ‘straight eighths’ feel of number 4 (every eighth of the bar articulated) has overwhelmingly dominated rock music since the 60s and is one of the basic drum beats every drummer should learn. For this reason, we’ll focus on this ‘duple’ division for now, and save ‘triple’ divisions (as well as 16th note divisions) of the beat for part 2. And for now, we’ll keep it simple, and work only with patterns using a steadily articulated backbeat on the snare, and mostly with the downbeat always articulated with the bass drum.

What we’ll see is that what varies at the most basic level of the rock drumbeat is the articulation- on the bass drum- of other 8th divisions throughout the bar. To illustrate some of the possibilities for basic drum beats, I am going to use a combination of traditional notation, with an accompanying graph for those not yet familiar with notation. We should assume the presence of ride pattern #4 in each of these examples: simply strike the high-hat at every counted division (1-&-2-&, etc) as provided in the first graph. The top row represents the snare hits; the bottom row, the bass drum. I’ll present several patterns in a more or less progressive way- but all are common, basic drum beats. With the exception of the last example, each is a one-measure pattern presented in a 2-measure staff so that it is easy to see how the end of the pattern connects back to the beginning.

7. As I mentioned before, the downbeat is most often articulated on the bass drum; the most common exceptions to this will be found in patterns that span more than one measure, such as this one. But even in those cases, the first downbeat of the whole pattern is rarely omitted:

So even within the eighth note grid, we can see that many more combinations than these are possible. Listen out for them in your favorite songs, and see what new ones you can come up with. In part two, we’ll look at some other possibilities and basic drum beats- until then, happy drumming!