There’s no greater feeling than going to a music store to pick out your first guitar, going home, and holding your brand new instrument for the first time. Whether you’re 10 or 50, playing the guitar for the first time is an experience you’re likely not to forget for the rest of your life. But learning anything new and starting completely from scratch can be hugely intimidating. When you stop to listen to all the incredible music that’s been made with the guitar over the last century, it can be difficult knowing where and how to get started. Beginner guitar solos, for example, can be a tough guitar skill to break into if you’re new to the guitar, but if you learn to tackle just a few basic scales and exercises on this instrument, you’ll be ready to improvise and write solos similar to the ones you hear in popular music.

We’re going to show you some easy ways to break into the world of beginner guitar solos, but you’ll need to have some experience with the guitar first. If you haven’t developed callouses on your fingers by learning how to play some basic chords and exercises, check out our recent article on guitar exercises to help you get started.

What Are Guitar Solos? 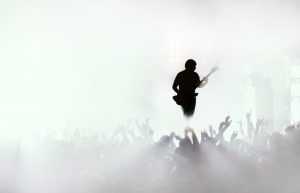 A guitar solo can be many things. They have the power to sound pensive and romantic as well as violent, manic, and aggressive. This is because effective guitar solos mimic the warmth, intimacy, and unmistakable personality of not only the human voice but also the emotional landscape within a person. But at their most basic level, guitar solos are simply melodic passages of music where the guitar is the main focus.

In beginner guitar solos in blues and rock genres, smart and restrained phrasing makes all the difference between a mediocre statement and a profound one. The famous composer Claude Debussy once said, “Music is the space between notes.” Good guitar soloists don’t just barrage listeners with a constant stream of notes. They learn to give passages of music plenty of time to breathe and sink in. They realize that the notes they’re playing will have far more potency if they’re played at just the right time. You can liken this to other artistic mediums like painting or photography where too much of something often begins to take away from the original idea.

Now that you know a little bit more about guitar solos, we’re going to show you how to get started with improvising and writing your own.

How To Get Started

If you’ve never played a guitar solo before, the best way to get started is by learning some simple major and minor pentatonic scales. The guitar is so popular because it’s one of the world’s most welcoming instruments to beginning students, evidenced partially by the scales we’re about to show you, which can easily be moved to any fret or key on the instrument. Essentially, if you take the time to learn these simple scales once, you’ll have the ability to move them up the fretboard and into any key in music.

Pentatonic scales are simple 5-note scales that are found in nearly every genre you can think of. If we can learn just one major and minor pentatonic scale shape, we’ll be able to borrow notes from those scales to learn how to create solos in any key. This is mandatory knowledge for anyone wanting to write, improvise, or imitate common solos found in popular music.

Before you make an attempt at soloing, create a warmup for yourself where you play these scales on every fret of the guitar to the steady click of a metronome, and do your best to not pause between scales. This will help you memorize these scale shapes and hone in your attention to rhythm at the same time. There are dozens more scales we could show you here, but for now these pentatonic shapes will give you everything you need to get started with learning how to play beginner guitar solos.

Unless you have a backing band at your disposal, you’ll need to find material to play over if you want to learn how to create guitar solos. A simple 12-Bar Blues progression is a great place to start laying down the foundation for writing and improvising guitar solos. If you’ve got a simple recording device on your computer (the Garage Band software program is a great option) or even your phone, you can record yourself playing this simple chord progression two or three times and then try soloing over it with the pentatonic scales you learned. Yes, this is a blues progression, but you can adapt it to any style you like. It’s a great way to start thinking about how you want to construct simple guitar solos.

The 12-Bar blues chord progression is a song structure that was developed in America’s delta region over a century ago. The idea here is to play four beats per chord symbol with whatever strumming, style, and speed you want. We’ll give you the bar chord version of this progression so that you can adjust it to fit any key you choose.

In addition to learning how to create and improvise with beginner guitar solos, it’s also a good idea to do some serious listening to the solos of guitarists you admire and wish to emulate. You should also branch out and check out masterful guitarists from genres that you might not be familiar with for inspiration. With some focused hard work and effort, you’ll soon be able to craft a soloing style and voice that’s completely your own.

1 thought on “Beginner Guitar Solos: Getting Started with Improvisation”