To a complete beginner, the world of guitar chords, riffs, and exercises might seem daunting or just downright impossible to understand. The guitar is responsible for some of modern music’s most impactful and memorizing music, and it’s easy to see how it takes years of focused practicing and hard work to develop prowess and technique on this powerful instrument. If you’re not sure how to get started, don’t despair. Guitar exercises are the best way to introduce important musical ideas like chords and scales, muscle memory development, and paramount music theory knowledge in a beginning guitar student. Intermediate and expert guitarists can also get a lot out of playing guitar warm-ups and exercises regularly.

What Is a Guitar Exercise? 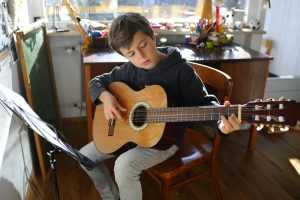 Guitarists grow and thrive when they actively work toward understanding their instrument. No music app or instructional can substitute the physical knowledge gained by a student holding the guitar, feeling the fretboard and strumming the strings, and guitar exercises put students to work by helping them master the basics of their complex instrument. Today we’re going to show you some beginner and intermediate guitar exercises that can help you gain understanding and proficiency on this incredible instrument. All of the exercises here can be played on electric and acoustic guitars, and the exercises we show you today will be helpful to students wanting to learn any genre of music.

If you’re looking for more challenging guitar exercises, feel free to move on to the next section. Like we mentioned before, the guitar might look complicated and foreign to you if you’re completely new to the instrument. For the first month of practice, it’s a good idea to get familiar with rudimentary guitar knowledge like parts of the guitar, string names, and the notes located on the first three frets of the fretboard.

This is a simple exercise to help introduce some important guitar concepts in a simple low-pressure manner. Starting with the thickest string on the guitar, we’ll call this the 6th string, strum downward and then upward on each open string. To memorize the string names, say the name of each string name as you strum. Starting with the 6th string, each string name is E-A-D-G-B-E. This exercise shows us a few important things that we’ll need to know as guitarists. First and foremost, it introduces the idea that the right hand plays the strings and is responsible for generating the noise we hear when a guitar is being played.

It also introduces a concept called alternate picking that’s vital in proper guitar technique. This is the idea that guitar picking shouldn’t ever just be exclusively one direction. When you pick down, your hand naturally lifts again to get in the position to pick down again. Harnessing that momentum to pick up during that motion is called alternate picking. This might seem complicated, but it’s not. We recommend implementing alternate picking into your playing right from the very beginning of your practice with the guitar. Forming good guitar habits from the beginning will save you time and frustration down the line. Like all the guitar exercises we’re going to show you in this article, practice this open string exercise with the slow click of a metronome.

Up And Down Warm-up (Ascending and Descending Chromatic Scale)

This guitar exercise introduces the idea of the left hand fingers pressing down frets to produce pitches as well as the concept that each left hand finger is sometimes assigned to a fret. Starting with the open 6th string, play the open string, 1st, 2nd, 3rd, and 4th frets using the alternate picking technique we discussed earlier. Repeat this on every string until you’ve reached the 4th fret of the 1st string. Now do everything the same way backwards until you reach the 6th string open again. This exercise is also known as the chromatic warmup because it explores the lower range of the guitar chromatically, or step by step.

This is a phenomenal exercise for beginners, but it might seem incredibly difficult to some younger students. Newer students don’t need to complete the entire warm up to receive the benefits of this exercise. Feel free to start with just one or two strings until you’re ready to tackle the entire thing. This warm-up helps build muscle memory, finger callouses, and dexterity in both hands. It’s a good idea to play along to the slow click of a metronome as soon as possible here, which you can steadily speed up as you progress.

Once you’re familiar enough with the guitar to be able to produce notes and strum strings, it’s time to learn how to play some simple chords. Chords are combinations of two or more different notes in music. For a more detailed explanation of chords, check out our recent article on basic music theory.

Being able to play and understand chords is a vital skill that every guitar player needs to know. Here’s two simple chords to learn if you’re completely new to the guitar and looking for some simple chords to memorize. 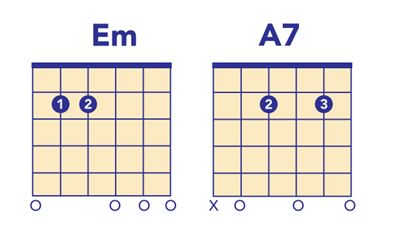 The first chord is E minor, or Em. We refer to any minor chord in guitar with a simple “m” next to the note name as opposed to major chords which have no letter attached. With your left hand, place your index finger on the 2nd fret of the 5th string. Now, place your middle finger on 2nd fret of the 4th string. Strum all the strings and you’ll get an Em chord. Glue your middle finger to the guitar for our next chord.

Our next chord is A7. Keeping your middle finger glued to that 4th string 2nd fret, add your ring finger to the 2nd fret of the 2nd string. Now, strum everything other than the 6th string, and you’ll have your A7 chord. Take some time to transition from one chord to the other. Try your best not to pause during these chord transitions.

Once you master these chords, you’ll be ready to tackle more difficult chords and chord transitions. 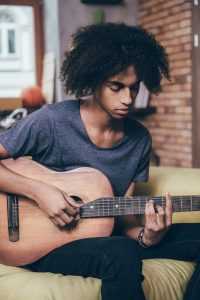 For people who’ve mastered the basics of guitar, it can feel difficult to know how to continue developing and growing as a musician. In this section, we’ll show you some guitar exercises that will help challenge you as a player by helping you to hone in your technique and by introducing some new musical concepts.

Many guitarists simply learn major, minor, and blues scales in only one octave, but those scales can only bring you so far as a player. Scale knowledge is paramount when it comes to writing and improvising on guitar. Something you should always keep in mind as a guitar player is that scales on the guitar can be moved anywhere on the fretboard; this because the fingers and steps between notes are the same in each scale. For example, we’re covering the 3-octave G major scale here, but it can be easily moved up one fret to become the 3-octave G# major scale. Musicians playing other instruments have a much tougher time playing scales and chords on their instruments.

This scale features three position shifts: one on the third string, and two one the first string. This is not a scale you want to rush, so play slowly and make sure to use the correct fingers. When you’re finished with this scale, try moving it to a few other spots on the guitar.

If you’re looking for a great scale to improvise within a blues or rock context, this scale is a great choice. Starting from the 6th open string, this scale spans nearly the entire fretboard and ends on the 1st string 12th fret. This scale breaks the “one finger per fret” rule, because the scale here requires your index and middle fingers to skip a fret every other string. Like in every scale or exercise, make sure to add in alternate picking.

Like scales, bar chords can be easily moved all over the guitar. For example, if you have a B minor bar chord shape on the second fret, this shape turns into a C minor shape once it’s moved to the third fret. Many beginning students go out of their way to avoid learning bar chords because it requires more finger strength than chords in the first position, but if you’re serious about becoming proficient on the guitar, you’ll need access to the many benefits that come with knowing how to play bar chords. Though bar chords might seem difficult at first, they are easy to play once your hand has gained the right amount of strength and muscle memory.

Essentially, knowing a few simple bar chord shapes gives guitarists access to any basic chord on the fretboard. If you want to learn how to play in sharp or flat keys, you’ll need to learn how to play bar chords. This guitar exercise will help introduce bar chord shapes and develop finger strength and muscle memory in your left hand. Starting all the way up on the 12th fret to make things easy, first make an E-shaped bar chord and then strum the assigned strings. By the way, all bar chord shapes imitate 1st-position chords like E, Am, and A7. After you’ve played the E shape, play the Am and A7 shape. Repeat these steps down one fret until you reach the bottom of the fretboard. There are many other bar chord shapes to learn, but these three will help you get started. Once you’ve mastered these chords, try relaxing your left hand fingers to mute the strings. Muting is an essential skill for guitarists playing in the blues, rock, and jazz genres.

This a guitar exercise that helps develop more complex picking styles because it forces you to skip a string. The example here features an interval of a Major 6th, but feel free to add in a different one if you prefer. While playing to the steady click of a metronome, start picking the Major 6th interval on the 6th string 12th fret. Then without pausing, do the same thing on the 5th string’s 12th fret. Repeat these same steps on fret lower until you reach the bottom of the guitar. Implementing the alternative picking pattern will be more difficult here because you’re skipping a string for each interval, but it’s important that you stick to the pattern. Start slowly here and work your way up to a faster speed when you’re ready.

Regularly working to improve your ability and to keep your playing prowess intact with guitar exercises is important guitar-playing maintenance that every serious guitar player should do. Playing exercises frequently has the power to introduce new concepts to beginning guitar students or to keep seasoned guitarists fresh and ready to play. Feel free to add variations to any of the guitar exercises we’ve shown you today to fit you and your unique needs.