As a voice teacher of students diverse in age and experience level, I’ve undoubtedly heard more requests for learning and practicing scales than any other vocal exercise from singers in voice lessons. Likewise, chances are that most singers have dealt with singing scales at some point as a vocal warm up in their lessons, in their repertoire, or in their general practice routine. One of the reasons that scales maintain such popularity is because they’re seen as a pathway to good technique, and rightfully so. Singing scales improves pitch memory (the ability to hear notes and phrases and accurately sing those notes and phrases), which is essential to any singer’s ear training. Additionally, because one scale typically covers several pitches spanning an octave, practicing scales challenges and expands the vocal range. 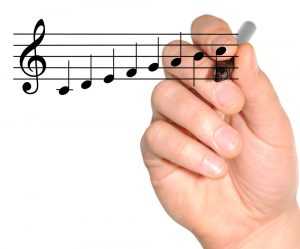 Scales can be sung in a variety of ways and offer the opportunity for customization depending on each singer’s needs and goals. For example, the singer can choose whether to sing a scale on vowels or solfège syllables, whether to sing an ascending scale, a descending scale, or both methods combined as one vocal exercise, and which direction to develop within the vocal range.

I’ve listed four of the scales most often used by singers below, all of which begin on Middle C so that the scales can easily compare to each other. Each scale increases in difficulty from the last—begin with major scales and advance onto the next as each scale becomes comfortable and has been sung throughout the vocal range.

Major scales are by far the most familiar scale structure to singers and usually the first type of scale introduced in voice lessons. Both the major and minor scales contain seven pitches plus the repetition of the starting pitch an octave higher. For those singers who are new to singing scales, the easiest way to conceptualize scales is to imagine a staircase—some of the steps are larger and some of the steps are smaller, but all of the steps lead to the duplication of the starting pitch. Like all scales, the major scale is made up of a series of whole steps (the larger steps, also called “whole tones”) and half steps (the smaller steps, also called “semitones”). Major scales are built on the following tonal sequence: whole – whole – half – whole – whole – whole – half. The first whole step occurs between C4 and D4, while the first half step occurs between E4 and F4. This sequence applies to ALL major scales and can consequently be transposed into any key.

Unlike major scales, minor scales use more than one type of tonal sequence. Though all three versions of this scale maintain the “minor” quality (darker, gloomier sound due to the lowered third scale degree), the tonal modifications found in each scale produce a noticeable difference of feeling, therefore providing distinctive purposes within compositions.

Perhaps the most unusual of the three minor scales, the sequence of the melodic minor varies depending on whether the scale is ascending or descending. Going up, the melodic scale looks almost identical to the major scale with the exception of the lowered third scale degree (“me”). However, going down, the scale duplicates the natural minor scale:

This particular minor scale is best sung both ascending and descending so that the alternation between the two directions is fully realized by the singer.

So far, this article has only dealt with singing scales containing eight pitches; however, the chromatic scale is entirely built on half steps, making the scale longer than most. Returning to the image of the staircase, the chromatic scale contains only small steps and is consequently a much more even, albeit difficult, scale to sing.

Singing scales indisputably poses a challenge and takes time to feel comfortable in the voice—here are a few tips to consider while learning to sing scales that I’ve found beneficial over the years: 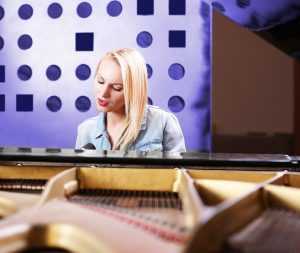 Singing scales is an essential part of any singer’s practice routine and there are countless ways to sing them in order to practice specific technical concepts. Happy practicing!

4 thoughts on “Singing Scales: 4 Scales Every Singer Should Know”