A Couple of Hypothetical Situations

You’re at a family gathering, maybe a family reunion or a grandparent’s 80th birthday celebration. You’ve been asked to play a couple of songs you’ve been working on lately on your saxophone. Maybe you played a duet or two with your older cousin who plays as well. Right after you finish, someone starts singing “Happy Birthday”, and others join in. People are singing this simple melody and you have your saxophone in hand. You could decide to just sing along… Or, since you’ve been working on thinking in 12 keys, you could quickly figure out the key and play along on your saxophone, impressing your family. 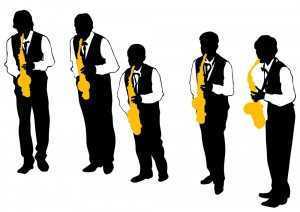 It’s time for your Christmas jazz band concert at school. There’s one song where you and another saxophone player are featured. It’s just a blues piece, nothing too difficult to solo over. You play a few choruses, then he plays a few choruses, then you start trading choruses, then maybe you start trading fours. At some point during the trading, he starts quoting some Christmas songs, because ’tis the season. He’s quoting “Jingle Bells”, “Deck the Halls”, “We Wish You a Merry Christmas”, etc. You’ve gotta think on your feet. You are improvising after all. Not only do you have to think of Christmas melodies, but you have to figure out how to play it in the key you’re in. Sure, you could just keep playing your best blues and jazz licks, but it would make for a much more entertaining show if you and the other saxophone player were quoting songs the audience was familiar with. Since you’ve been working on thinking in 12 keys, you step in with “Rockin’ Around the Christmas Tree” and everyone loves it.

Taking a Step Back to Look at the Big Picture

This is the third installment of a blog series entitled “Jazz Exercises for the Saxophone”. The first two articles covered beginner and intermediate concepts for playing in 12 keys. Before we move on to more advanced concepts, I think it would be advantageous to take a step back and reevaluate the way we think, and discuss different ways to think, when playing in 12 keys.

The first two installments of this blog series dealt with digital patterns and some simple common resolutions. We talked about practicing all of the digital pattern permutations and the resolutions in 12 keys, and I gave you a systematic way to practice them (the different root movements), but maybe I can be more clear on what you should be thinking when you’re practicing this material to be as efficient as possible. 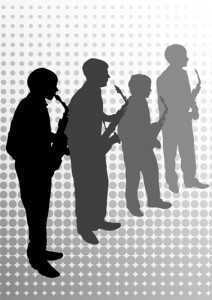 There are several different ways to approach jazz and jazz education; there are many different schools of thought. Likewise, there are a lot of ways to approach playing in 12 keys. Everyone learns differently. As a teacher, I need to be aware of how my students approach learning different subjects so I can cater teaching music to their specific needs. As students of music, we should be aware of how we learn. Like many things in life, learning to play in 12 keys is a spectrum of two extremes that people fall to one side of. Some people rely more on their ears and some people rely more on logic. When I say “logic”, I mean specifically relying on thought more than on your ear. In the case of playing in 12 keys, that would usually mean thinking in terms of scale degrees (in the C scale C=1, D=2; in the F# scale F#=1, G#=2, etc.).

In my opinion, it’s most effective to use a combination of both of these methods. People that rely too heavily on their ear can be extremely limited, as they haven’t learned about thinking in 12 keys. What happens when they have to play “Giant Steps” or “Cherokee” at quarter note = 300? Nobody’s mind processes external information that fast. People that rely too heavily on logic can also be limited. I worked with a bass player once who stuck completely to reading the chart. If the singer came in after four bars of interlude when it was supposed to be eight, the bass player would be off for the rest of the chart. Remember, music is an aural art. Ideally, you should employ a healthy mix of using logic and using your ear so that you can succeed in both playing and thinking in 12 keys.

The past couple of blogs have probably been pretty dry. The exercises in this blog will be more fun and immediately rewarding. I’ve picked out some easy songs for you to learn in 12 keys. See how your brain works when learning these songs. Try using logic as well as using your ear so that you begin thinking in 12 keys. See which feels more comfortable, but keep trying both methods even after you figure this out.

Examples Based on the Major Scale

These first few examples are based solely on the major scale. The first two are easy songs everyone knows. The third one is a jazz standard. Many jazz standards, although the harmony may go through many keys, are melodically based on one scale. The ‘A’ section of “Cherokee” is essentially based completely on the pentatonic scale. These examples, as well as the ones below, aren’t necessarily in the correct key. That’s not really important though, since we’re practicing these in 12 keys.

Example Based on Harmonic Minor Scale

Example with Notes Outside of the Scale

This final example for thinking in 12 keys uses the major scale primarily, but has a note outside of the scale. The #4 is a common “outside” note in tonal music. Also try learning “Maria” from “West Side Story” in 12 keys. It uses the #4 as well. Maybe also try learning the theme song from “The Simpsons”. That uses #4 and b7.

Where to Go From Here 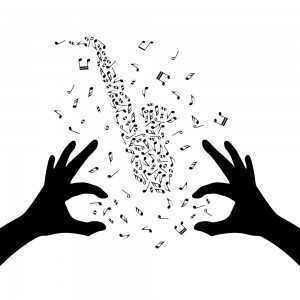 The second hypothetical situation I referenced in the first section of this blog is actually extremely common in the jazz world. If you listen to a lot of jazz, you’ll realize jazz players quote other songs often. It could be quoting “Jingle Bells” or “Happy Birthday” or something more complex. Jazz players will often quote bebop melodies. If you want a challenge, listen to “Groovin’ High” and figure out the line that is repeated three times in three different keys. Then, learn it in the remaining nine keys. Then you’ll be able to quote that line over any ii-V-I progression.

This third installment was a brief interlude from what we discussed in the first two articles. It provides some extremely useful and fundamental information about thinking in 12 keys that will help solidify the information from the first two posts as well as in the next and final post of this blog series.