Clarence Clemons was a prolific American saxophone player. He is most notable for his extensive work with Bruce Springsteen and the E Street Band, although he also performed and/or recorded as both a leader and as a sideman alongside artists such as Aretha Franklin, Gloria Estefan, Lady Gaga, and many others. The name “Clarence Clemons” is probably the most recognizable name of any saxophone player in the pop and rock genres. In order to learn the “Born to Run” saxophone solo it’s essential to know Clarence Clemons’s work.

“Born to Run” is in the key of E concert (F# on tenor saxophone, C# on alto saxophone). The intro riff on the saxophone is pretty simple. The chord progression being played by the band is I-I-IV-V. The saxophone plays the fifth of each chord.

Something worth noting is that the saxophone only plays this specific line on the original studio recording. Every live recording I’ve checked out has the saxophone playing a different riff. Check it out for yourself and see if you can hear what the differences are.

Okay, now that we’ve got the intro riff dealt with, on to the good part. The solo section has basically the same I-I-IV-V progression as the beginning. Throughout his long career with the E Street Band (1972-2011), Clarence Clemons played the “Born to Run” saxophone solo the same way every time. When covering some pop songs, it’s okay or even desired to play your own improvised solo. In the case of “Born to Run”, though, you should always play Clarence Clemons’s solo as he played it. Anyone who is at all familiar with the song is familiar with the “Born to Run” saxophone solo; maybe even able to sing it. The solo, as played originally, is an essential part of the song.

The solo is mostly pentatonic-based in the key of concert E major. There are a couple of exceptions: the minor third blue note (concert G) is hit twice and the major seventh (concert G#) is hit once.

There are quite a few things that make “Born to Run” a not-so-ordinary rock song. For one thing, it doesn’t really have a chorus. The title words are sung throughout, but act as more of a hook than a section. Another abnormal characteristic of the song is the middle section (it can be called the breakdown section, or the bridge, or the interlude). It changes keys a couple of times, and ends with a chromatic off-beat line. I’ve written out part of this middle section. You can easily figure out the rest based on the example I’ve transcribed.

So how did I transcribe the music above? What was my process? First, I should say, transcribing gets easier and easier with each song or excerpt or solo you transcribe. Eventually, once you have your process worked out, transcribing a song like this shouldn’t take much longer than a few minutes.

I analyzed the essential saxophone sections from “Born to Run” above, but I purposely left out a few parts so that you can attempt figuring them out for yourself. Also, if you listen to different live versions of the song, Clarence Clemons plays slightly different things each time. The idea is to get a deep understanding of the song so you’re more flexible when performing it. 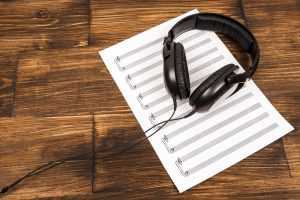 The best way to start transcribing a song like this, with the idea of eventually getting it performance-ready, can be done away from your horn. You want to listen to the song several times and figure out what the form is. You can jot down each section on a piece of paper in whatever shorthand you’d like, but eventually you want to get away from reading. Most songs have a simple pop/rock form: intro, verse, chorus, verse, chorus, interlude, verse, chorus, chorus, outro. “Born to Run” is slightly more complicated: intro, verse, ‘B’ section, intro, verse, ‘B’ section, intro, bridge, interlude, verse, ‘B’ section, new material similar to intro, intro (outro) x2. You can jot down how many bars each section is or just listen to it enough times to be able to feel it.

After you’ve figured out the form, you can grab your horn and find out what key it’s in. First, listen if it’s in major or minor. “Born to Run” is in major. Then, find out what key it’s in. The easiest way to do this is to listen to the recording next to a piano or with your horn and to figure out what the root is. The only way to do this really is to do it by ear. Once you believe you’ve found the root, try playing the scale and arpeggio along with the recording to make sure it sounds correct.

The next step is to figure out the harmony of each section. Most of the time, you can listen to the bass. But, this isn’t always the case. The bass is playing a pedal tone in the first four bars of “Born to Run”. But, after that, it plays the roots. To accurately figure out the harmony of each section, you should play along with the song on piano or guitar or any chordal instrument. You could also arpeggiate each chord on your horn, but that’s a little more difficult.

Once you find out the form, the key, and the harmonic structure of each section, figuring out what the specific notes are should be very easy. Once you’ve been transcribing for a while, you tend to do all these steps pretty much simultaneously.

After you’ve done all of that, the final step is just to play along with the song as much as possible, listen to many different recordings, and just be as flexible as possible when performing the song with other musicians (sometimes other musicians mess up the form and you have no choice but to follow).

As we went over last time, there are so many famous saxophone solos in pop music history. If you plan on becoming a professional musician, then you will most likely need to be familiar with these solos. Very few people can make a living playing jazz (or whatever your main genre is) full-time. Even some of the best jazz players still play wedding and corporate gigs.

Some solos don’t need to be learned verbatim; they can be improvised. The “Born to Run” saxophone solo is one of the most well-known, most recognizable saxophone solos of all time; if you’re going to play in a Top 40 band, this solo is a must-know.

Transcribing music becomes easier and easier the more you do it. As jazz players, we transcribe music that is melodically, rhythmically, and harmonically extremely complex. Learning pop songs is not difficult. Once you have a process worked out (which I’ve gone over a little bit above), learning pop music should not be incredibly time-consuming.

What I’ve provided above is a brief outline of “Born to Run”. I have purposely left out some of the sections. The live versions are also different and vary slightly from performance to performance (although remember, the “Born to Run” saxophone solo is essentially the same every performance). Once you feel comfortable playing “Born to Run”, you should move on to another song. For reference, go back to my last blog post to figure out what song to work on next. If you want, you can keep a journal (paper or digital) of all the songs you’ve learned, but eventually you’ll want to have these songs and solos memorized.