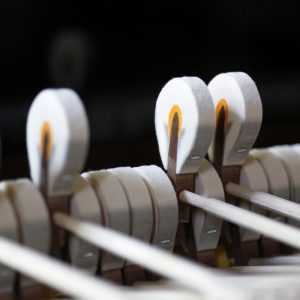 If you play music casually and aren’t familiar with basic music theory you might not be privy to the amazing world of 7th chords. Used in music from nearly any genre you can think of, these chords have the power to deliver color, mood, and atmosphere to songs that might otherwise sound drab and uninspired. In this article, we’re going to explain what 7th chords are and how to build them on the piano and guitar. You don’t need to be a music theory aficionado to understand the concepts we’ll be discussing in this article, but having some music theory knowledge will certainly help.

In order to properly understand 7th chords you’ve got to have a good idea of what basic chords are first, so here’s a quick review.

Basic major, minor, and diminished chords can be constructed by using simple formulas. We’re going to use the visual aid of a piano’s keyboard here, but feel free to adapt this information to your specific instrument. The “root” or base note of all of these chords will be the note the chords are built from. For example, if C is at the bottom of the chord, the chord will be some version of a C chord. The formulas we’ll use here include intervals (predetermined relationships between notes) in music.

For example, many chords in music feature the interval of a Perfect 5th. Starting with our example of a C note, a Perfect 5th above C is seven half steps above on the G. The “5th” comes from the fact that the G is five notes above the C in the major scale, but if that’s confusing just stick to counting half steps for now. Here are the intervals you’ll need to know to be able to build basic and 7th chords for this article:

Minor 3rd: 3 half steps above root

Major 3rd: 4 half steps above root

Tritone: 6 half steps above root

Perfect 5th: 7 half steps above root

Got it? Here’s a quick review of how to build basic chords before we move on to 7th chords: 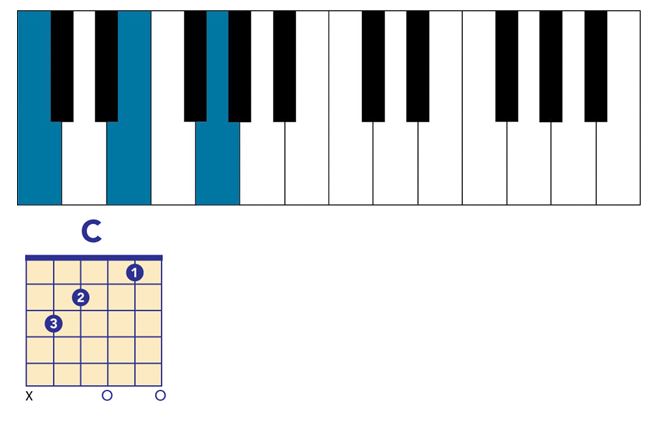 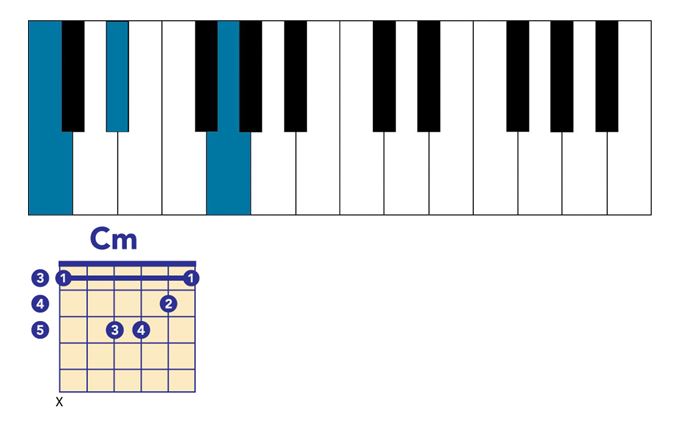 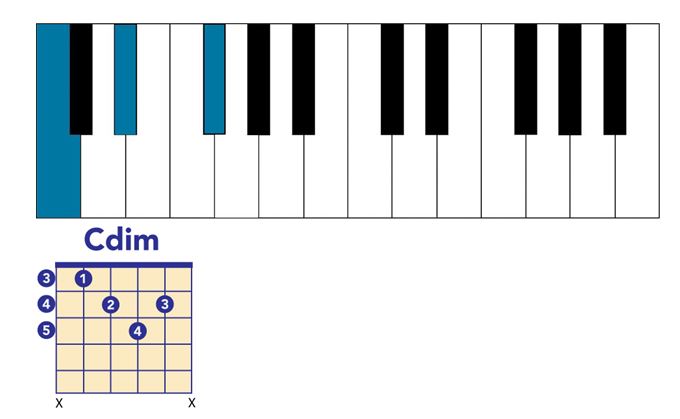 *To clarify, the 5th and Tritone intervals are added on top of the root, not the third of the chord*

The “7” in 7th chords comes from the fact that 7th chords feature a major or minor 7th interval in its chord structure. This added interval completely changes the chord by adding a unique character that wasn’t there previously. When you realize that entire genres of music like blues are built almost exclusively off of variations of 7th chords, it’s astounding that the addition of one simple note can make such a massive impact.

We’re going to walk you through each 7th chord variation by showing you how to build it and describing what it sounds like. 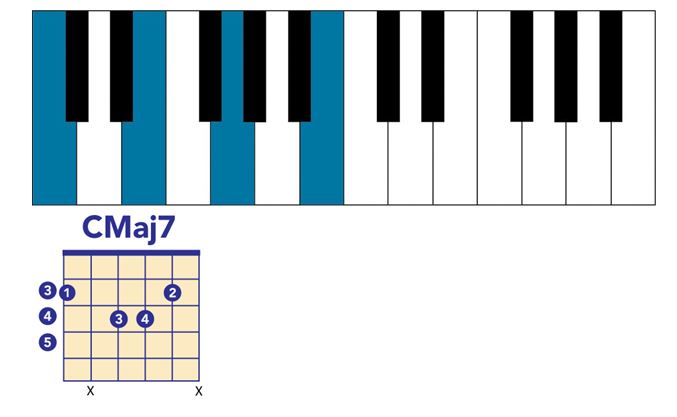 These famously beautiful chords are used in every style of music from intellectual jazz pieces to indie-rock songs. If you’re looking to add levity and transcendence to a chord progression, including a major seventh chord is a good way to do it. The included guitar shape is a major seventh chord that can be moved all over the fretboard and can be adapted to any key in music. On your instrument, try playing a few major 7th chords in different keys.

Dominant chords are typically referred to as just 7th chords in music. For example, if you’re learning a song on guitar and come across an A7 chord, then that chord is almost certainly a dominant 7th chord. Dominant chords are packed with tension and drama. The dissonance in this chord comes from the included Tritone interval which in our example lies between the E and Bb notes (a Tritone is an interval of 6 half steps).

Dominant chords are used in practically every type of music, but are heavily used in blues music. The function of dominant chords is chiefly to resolve to the tonic chord of the established key, but blues music doesn’t use these chords in that way. The story behind most blues songs is one of pain, dissatisfaction, and frustration, and this is reflected in blues chord progressions where one dominant 7th chord is usually resolved by another and then another one after that. Like in the case of the major 7th guitar shape, this dominant bar shape can be moved to any fret and key of music. 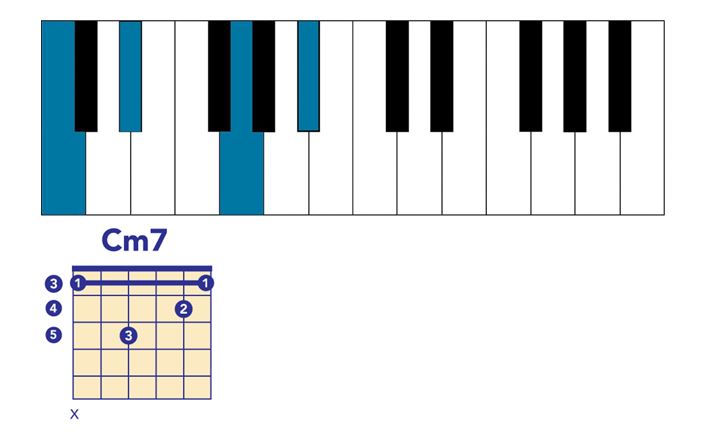 Though these chords are found in most styles of music, they are huge a staple in jazz and R&B genres. Unlike dominant and major 7th chords, the added minor 3rd interval found in these chords doesn’t completely alter the character of the chord. Like in the other guitar shapes, this simple bar shape can be moved anywhere on the fretboard. 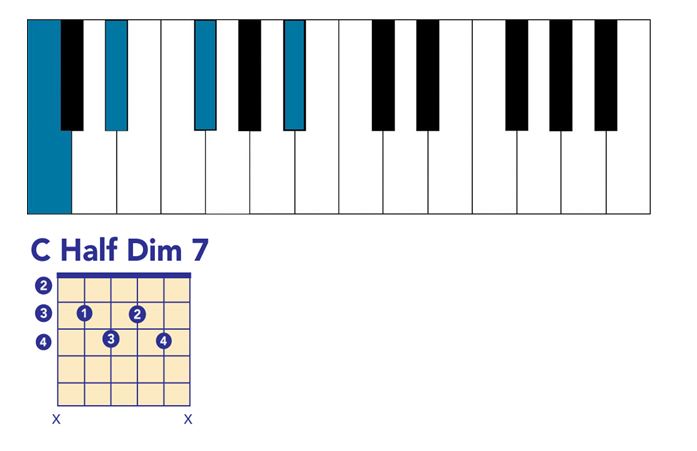 These captivating chords typically feature a circle with a slash through it to represent its half diminished nature. These are excellent chords to use when you want to add an atmosphere of mystery into a piece of music. The added major 3rd interval is what makes this 7th chord a half diminished chord rather than a fully diminished one. 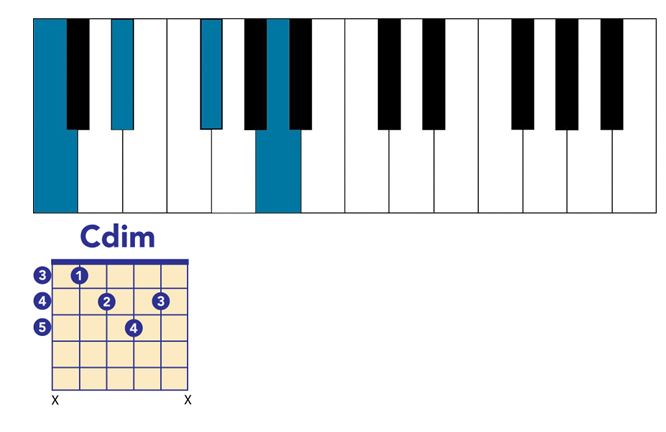 Diminished 7th chords are masterful at expressing doom, tension, and fear through music. Though they can be found in popular music, they’re mostly featured in art music because they are so tense and dissonant. If the C diminished 7th chord example above is confusing, don’t worry. The double-flatted B is used here because simply calling the added 7th interval an A implies an interval of a 6th which is not featured in this chord. Try building this chord in other keys.

Without 7th chords, music would be markedly more drab. If you’re an aspiring songwriter or composer, put what you’ve learned here to use by writing a simple chord progression that explores the sound and feel of different 7th chords.