If you don’t read music, you might not be privy to the world of time signatures. Time signatures are simple devices in music meant to serve as a sonic grid or road map. Without them, we wouldn’t have the vital organizational direction we need to know how many and what kind of beats to assign per measure of music. Terms like “time signatures” might seem stuffy or downright boring, but if you are serious about learning to play an instrument, you’ll need to know and understand them well. In this article, we’ll show you how to read and understand time signatures, and we’ll also show you examples of popular songs that feature common and not so common meters.

First things first, we need to get something important out of the way: Time signatures do not determine the speed at which a piece of music is played. The tempo of a piece will determine how fast or slow the music should be played. Popular music doesn’t give musicians a lot of help as far as instructions to indicate the tempo (speed) of a piece should be played, but classical and art music typically contain general instructions at the top of sheet music for tempo. The terms are usually written in different languages like the dynamic marking “Adante,” for example, which is Italian for “at an easy walking pace.” Time signatures purely exist to tell us how many and what kind of beats are featured per measure in a piece of music.

What Are Time Signatures?

Time signatures are the set of two numbers stacked on top of each other at the beginning of a piece of music. Here’s an example of the most common time signature, 4/4: 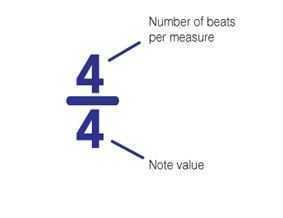 The top number of the time signature determines how many beats there are per measure. The bottom number indicates the note value of the beats. In the case of our 4/4 example, the bottom “4” is referring to a quarter note. So, in music-speak, 4/4 translates to four quarter notes per measure. Time signatures are not set in stone and can switch throughout one song or piece of music. Though rarely found within popular music, there are many examples of multiple time signatures found within one piece of music in the classical and art music world. The subversive “Math Rock” genre has built its reputation on its use of frantic and unpredictable changes of meter within one song.

The song “Tonto” by Brooklyn math rock geniuses Battles is an example of a song that features multiple time signatures:

To help give you an idea of what time signatures sound like, we’re going to give you examples from some common and lesser known meters found in popular music.

Though it can also interpreted as being in 4/4, “Life On Mars” is a good example of the marching pulse of a 2/4 time signature. During the choruses especially, the chords seem to revolve and reset after the 2nd beats, which gives the song its triumphant feel.

This aptly named song is a great example of 3/4 in a popular music context. This time signature groups strong beats into threes, and many waltzes and dances are written around this common meter.

4/4 “Hey Jude” by The Beatles https://www.youtube.com/watch?v=A_MjCqQoLLA

This time signature is so common that it’s sometimes referred to as “common time”. Like “Hey Jude,” music written in 4/4 is usually simple, predictable, and designed for a wide audience.

Jazz legend Dave Brubeck’s “Take Five” is popular music’s most easily recognizable song that features five quarter notes per measure. This catchy and sleek tune is written so well that its unconventional meter is hardly detectable to listeners without a music background.

This wonderfully manic song manages to defy the boundaries of what popular music can and can’t sound like with its unconventional time signature and use of electronically generated textures of sound. 7/8 is a time signature that manages to deliver a great deal of tension to the music due to the fact that the measures never seem to feel complete or resolved.

There are many more time signatures to explore and appreciate, so the songs above are just a few examples of how creative uses of time signatures can be used in music. If you’re new to reading music on your instrument, we recommend sticking with conventional time signatures until your reading skills are developed.

Reading Music for Beginners: Rhythm and The Staff