How to Improvise on Guitar

A staggering amount of amazing music has been created by talented guitarists with the ability to pull riffs, rhythms and solos seemingly out of nowhere right there in the moment during live performances. Guitar improvisation might seem like something musicians are born with, but many of the important skills guitarists rely on for creating solos, riffs and chord progressions on the spot can be easily taught. In this article, I’ll give you some helpful tips and exercises to help you learn how to improvise on guitar.

A brief history of guitar improvisation

Modern guitar improvisation happens in a variety of genres and styles, but its roots are largely found in the American jazz and blues musical traditions. Early blues and jazz guitarists often made a habit of improvising solos by ear during live performances (musicians play by ear when they improvise over a set piece of music without any prior knowledge of scales, key or form), but as jazz evolved from swing to bebop, players in the genre began to rely on borrowing notes from complex scales to help their impromptu compositions keep up with the new and more sophisticated music.

While many of the skills and methods used to write music and improvise are the same, the acts of improvisation and songwriting are two totally different things. The main difference is that improvisation is largely performance-based while songwriting is an act of trial and error with an infinite amount of starts, stops and revisions. With improvisation, you’ve got one shot to communicate your musical ideas effectively. Writing songs, melodies or riffs on the guitar is a process that can take days, months or even years depending on the writer. Something that makes improvisation so compelling is that it’s a style of playing that can only exist in the moment. Its embrace of immediacy is something that often gets lost in the songwriting process.

Musical improvisation is defined as any sort of musical performance that happens in the moment, but there’s a few different ways guitar improvisation can happen. A solo guitarist can improvise using a combination of chord progressions, riffs and melodies. Guitarists proficient in the fingerpicking style are able to seamlessly combine both chords and melody together during improvisation because they’re use of multiple fingers gives them more playing options than guitarists who rely on hard picks.

Guitar improvisation in a band setting features a guitarist that plays riffs, chord progressions or singular lines of melody. Groups of musicians either perform improvisationally over predetermined rhythms, keys and chord progressions, or in a completely free-form manner. For example, musicians who play together with absolutely no set plan or idea of the kind of music they’re about to play are collectively improvising in a free-form style. No two free-form musical improvisations sound the same. They feature a vast exploratory quality that can’t be heard or experienced in conventional live music settings. This style of improvisation tends to embrace dissonance, uncertainty and unpredictability.

A guitarist playing an impromptu riff or solo over a predetermined set of chords, keys and rhythms is engaging in a totally different style of improvisational playing. This sort of improvisation is commonly found in blues, jazz and rock live music performances. While free-form improvisations can literally sound like everything and anything, guitarists who improvise over pre-determined sections during songs tend to follow conventional rules as far as rhythm and melody. As listeners, this means that there’s generally not going to be anything in the improvised section of music that we won’t musically expect (dramatic changes in meter, tempo, key and so on).

Guitarists improvising in band settings have a few options for developing material over predetermined sections of music. In blues music, guitarists tend to approach improvisational parts with lyricism in mind. The riffs and solos a blues guitarists improvises frequently imitate and develop the vocal melodies found in other parts of the live performance. But even if a singer isn’t part of a particular blues band’s live configuration, the improvised solos blues guitarists usually boast the same feeling, phrasing and melodic tendencies as a singer’s vocal line.

Other guitarists develop bits of improvisational solo material alone before they bring it to a live performance setting. And before you say, “Hey! Isn’t that technically cheating because all improvising has to happen right there and in the moment?,” I should tell you that there are no set rules for this sort of thing. Different sorts of musicians, performers and songwriters all use different techniques that work for them and their specific musical needs, and there’s nothing wrong with that. Learning how to improvise on guitar will probably be a completely different experience for you than it will be even for other guitarists with a similar experience level and background.

The important roles listening, emotion and intuition play in improvisation

No amount of practice and detailed training can give guitarists the special attention to emotion and intuition they’ll need to become successful improvisors. Guitarists who improvise on their own without a band backing them need to develop the skill of knowing what sort of musical material to play long before it happens during a performance. A powerful musical intuition and knowledge of music theory, chord progressions and scales has to be developed to be good at this sort of thing. Part of the challenge for solo guitarist improvisors is that there’s so many options for where to take the music at any given time.

Improvising in a band setting brings a completely different set of challenges. Great improvising in these live settings happens when guitarists are able to listen to what their bandmates are doing and can then play accordingly. The act of listening allows a guitarist to tune in to the collective emotion and feeling that’s being conveyed during a piece of music. Essentially, the best improvisors act as musical conduits of the song that’s happening around them. Depending on the song and style of music being played, this might mean it’s a better choice to play something sparse and nuanced instead of ripping through a crazy virtuosic solo. Great guitarists have developed the skill of knowing when to speak up and step back when it comes to improvisational playing. A guitarist’s improvisational skills almost entirely depend on how well they’re able to listen and reinterpret the music happening around them.

Now that you know more about what guitar improvisation is and what it takes to be improvise effectively, let’s jump into some exercises to help get you ready to improvise.

I’ve you’re new to learning how to improvise on guitar, I’ve got some really great news for you. Most everything you learn in one place on the guitar can be easily moved or transposed to spots and keys up or down the neck. This means that most scales, chords and other shapes just have to be learned one time before they can be moved to any other key. For example, the 3-octave minor blues scale in the key of E we’re about to show you can easily be moved to the key of F starting on the first fret, G starting on the second fret or any other key you want—though you might have to shorten this particular scale down to two octaves if you bring it to too high of a key.

Yes, taking on some things on the guitar can be a bit intimidating, but aspects like this make learning how to improvise on guitar a lot easier to wrap your head around.

Played alone, these scales sound sort of jarring to the average listener. They’re not typically found in popular music but are staple scales that jazz musicians rely on for improvisation. If you’re looking for material to improvise with for jazz performances, this scale will be a great tool for your arsenal. Again, scales like this can easily be adapted for different keys.

Major scales can be used in every style of improvisational playing as long as the chord progressions you’re playing over are in a major key. These 3-octave scales are a great way to get guitarists acquainted with the entire depth and range of their instrument.

This is a chord progression originally developed in the blues genre that’s now frequently used in virtually every type of music you can think of. If you’re looking for a simple chord progression to practice improvising over, the 12-bar blues is as easy and predictable as it gets. It can be adapted to any key, speed and style of music. There are an endless amount of variations when it comes to the 12-bar blues, but the basic form is a combination of I-IV-V chords. Every chord, which is usually a dominant 7th chord, gets four beats. We’re going to use the Roman Numeral system of explaining the chords in this progression. If you need help understanding that, check out our recent article about music theory for a detailed explanation.

We’re going to show you how to play the 12-bar blues progression in the key of E. These are the chords you’ll need to know. Like the scales we’ve shown you, these chords can easily be moved to other keys around the neck of the guitar:

To develop your improvisational skills with this progression, try recording yourself playing it a few time onto your phone or computer. Then, practice improvising over the progression using notes from the E minor blues scale we showed you earlier. This exercise is a great way to test the improvisational waters in a comfortable controlled setting before you try coming up with material in front of bandmates or on stage.

Arpeggios are different than scales because their function is to outline basic and extended major, minor and diminished chords note by note. Major and minor scales are each comprised of eight individual notes, but arpeggios explore different combinations of the single notes found in chords. We’ll start you out with a few simple ones to make it easy. Memorizing a few simple major and minor arpeggio shapes will give you improvising options all over the fretboard. 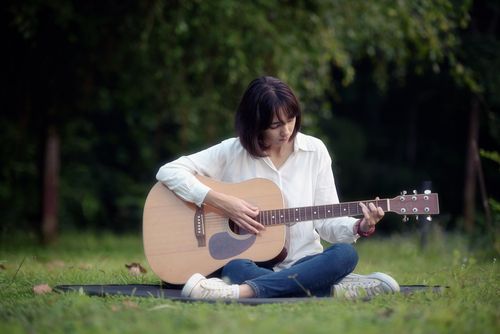 Like anything else when it comes to music, if you’re setting out how to learn how to improvise on guitar, you should plan on practicing as frequently as possible. The best improvisors learned their craft by being open to performance situations with a decent risk of failure involved. Failure is a word that terrifies many musicians, but it’s an essential part of the game when it comes for improvising on the guitar. Unlike learning how to play chords and scales, the act of improvisation is a skill you’ll develop over a period of years through trial and error. Try improvising alone and with a band in different tempos and styles to find your voice when it comes to this style of playing. For more helpful articles about the world of music, check out the Musika Lessons blog.