If you’re new to music and want to learn how to play an instrument, the ukulele just might be your best bet. Everything from its small size to how easy it is to play basic chords makes the uke one of the friendliest instruments on the planet for complete beginners. But even with how easy this amazing instrument is to learn, you’ll still need some guidance if you want to get the most out of the ukulele. This is a special Musika Lessons ukulele tutorial. In this article, we’ll show everything you need to know how to play the ukulele.

To get the most out of this ukulele tutorial, you’ll need a few things to get started:

These are devices designed to help keep your instrument in tune. They can detect pitches and tell you if your strings are too high (sharp) or low (flat). Your local music store will have many external tuner options, or you could download a free or inexpensive tuning app straight to your smartphone. 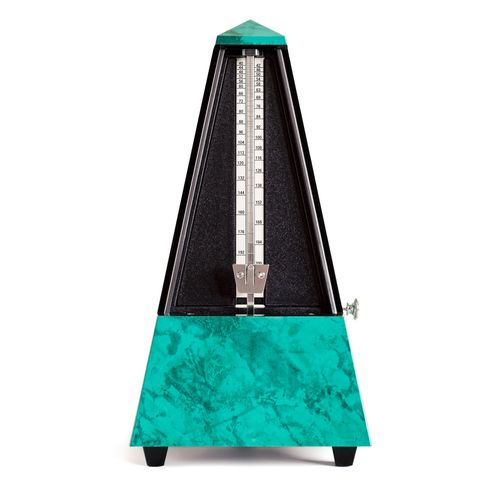 Metronomes are designed to produce audible beat sequences. These devices are important for developing rhythm, a skill you’ll absolutely need in playing the ukulele.

If you want to get the most out of this ukulele tutorial, write down the chords and scales you see here so you can remember it later.

What the heck is a ukulele anyway?

Ukuleles are similar to modern classical guitars, but with some pretty noticeable differences. They’re about a fifth the size of a typical classical guitar and include only four nylon strings compared to the guitar’s six. A typical guitar is tuned sequentially from low to high, but the ukulele’s top string is tuned higher than the rest. There’s a few different types, but this ukulele tutorial is based in the most common ukulele, which is called the soprano ukulele.

Where did the uke come from?

Ukuleles are Hawaiian adaptations of Portuguese instruments called machetes, which are basically miniature versions of the classical guitar. We have 19th century Portuguese immigrants to thank for bringing machetes over to Hawaii, which have slowly evolved into the modern ukulele over the past century. In 2017, the ukulele is now one of the world’s most popular instruments and is featured in a broad range of popular music.

Why the uke is so easy to learn 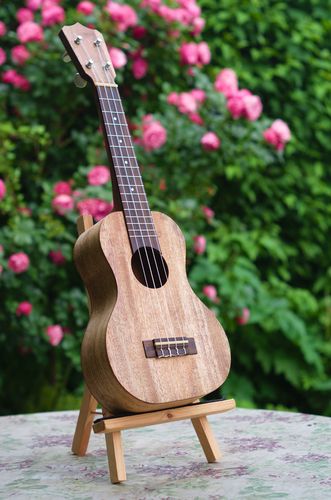 The uke is an awesome choice for people of every age and background because it’s so easy to learn. Ukuleles are easy to hold and their strings are easily pressed down. The strings on electric and acoustic guitars take a long time to learn how to press down and can be uncomfortable to play at first. And with only four strings, even the more complex ukulele chords aren’t that difficult to play. The uke is also a great introduction for the guitar. Most of the skills you develop on the ukulele can easily be transferred to the guitar.

Like we mentioned before, ukuleles are typically tuned with the highest string placed where the guitar’s lowest string is. If you’re a guitarist learning ukulele for the first time, this might be a strange thing to get used to. The uke’s strings are tuned to G, C, E and A. We like the acronym “Greedy Cats Eat Avocados,” but feel free to create your own to help you memorize the uke’s string names. 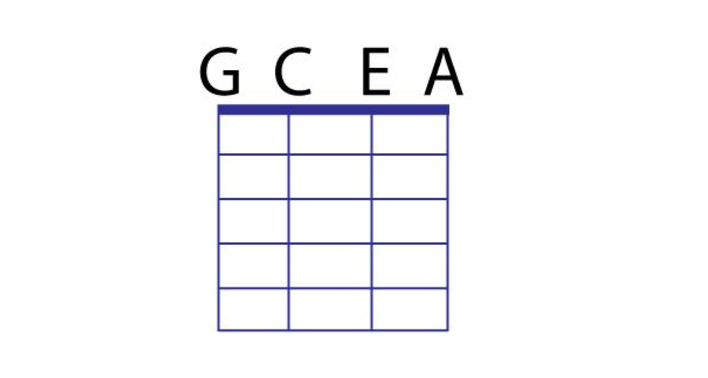 Before you play the ukulele, make sure your strings are correctly tuned to the correct pitches. You won’t be able to play basic things like chords or scales on your uke unless every string is in tune.

You have the option of using a hard pick or your fingertips for strumming the strings of the ukulele. Both options are perfectly fine, but we recommend using your fingertips because playing with a pick can sometimes be a little too cumbersome for beginners.

To help introduce you to the ukulele, we’re going to first introduce you to scales. Scales are step-by-step sequences of note patterns that explore different major and minor keys in music. There’s many different scales you can learn, but the good news for uke players is that any scale can be moved to different spots around the uke so long as it doesn’t use any open strings. This means that learning just a few scales will give you easy access to tons of other major and minor scales.

Major scales are scales that outline major keys. This G major scale doesn’t use any open strings, which means it can be moved to other keys and spots around the uke. We’re using tabs to teach you these scales. Each line represents a string, and the number represent the individual frets you’ll play.

Minor scales are scales that outline minor keys. In music, there’s three different types of minor scales: natural, melodic and harmonic. The scale we’re showing you here in this ukulele tutorial is the natural minor scale, which is the most common of the three minor scales. We’re going to show you how to play an E natural minor scale. The key of E minor is a relative minor to the key of G major, which means that both G major and E minor share the same notes but begin in different places.

The various chords we hear in music are built off of two or more different pitches played simultaneously. Pretty much all of the tonal music (music with notes and harmonies) we hear in popular culture features different repeating progressions of chords.

There are three basic types of chords found in music: major, minor and diminished. Major chords sound full and complete, while minor chords sound morose, pensive and dramatic. Diminished chords sound dissonant and jarring. Composers and songwriters use these basic chords as a platform to build their music on. A song’s most noticeable feature is its melody, but everything about that melody is dictated by the chords it’s played over. 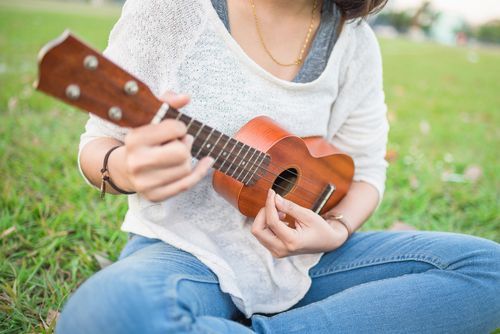 To introduce you to chords, we’re going to show you how to play chords from a couple of simple keys in music. The chords found in these keys are found in hundreds of songs in music, and the chords found in songs played on other instruments like the piano or guitar can easily be adapted to the ukulele.

Starting with the key of C major, memorize each chord and then focus on transitioning from chord to chord. As soon as you can, start practicing these transitions to the slow click of a metronome. If you’re interested in learning how to play songs, the best way to prepare is to learn how to play as many chords as you can. 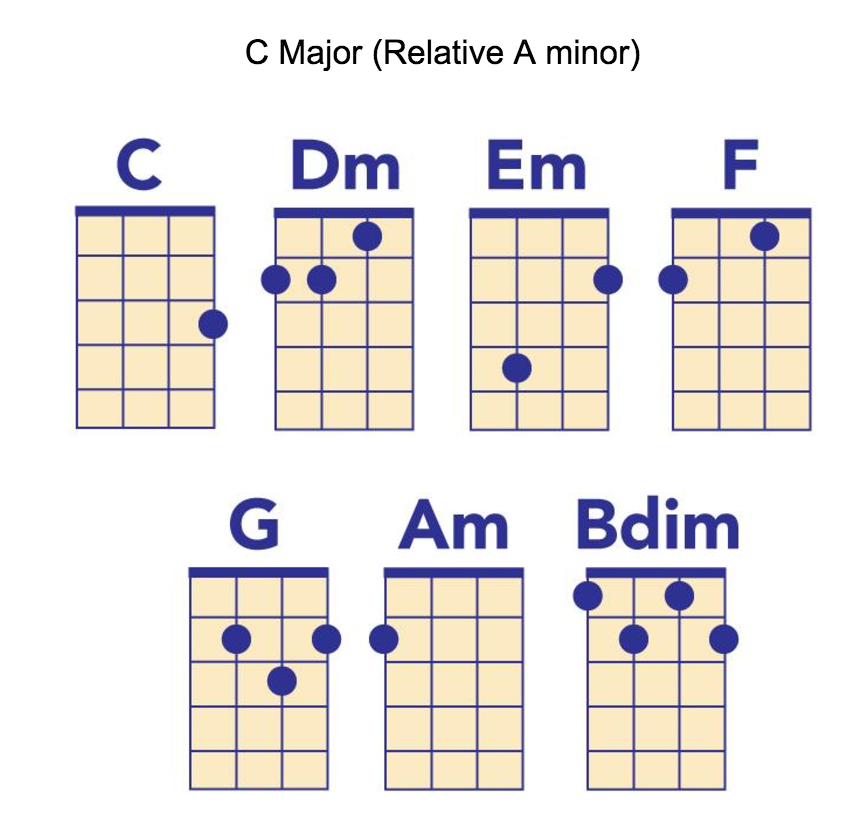 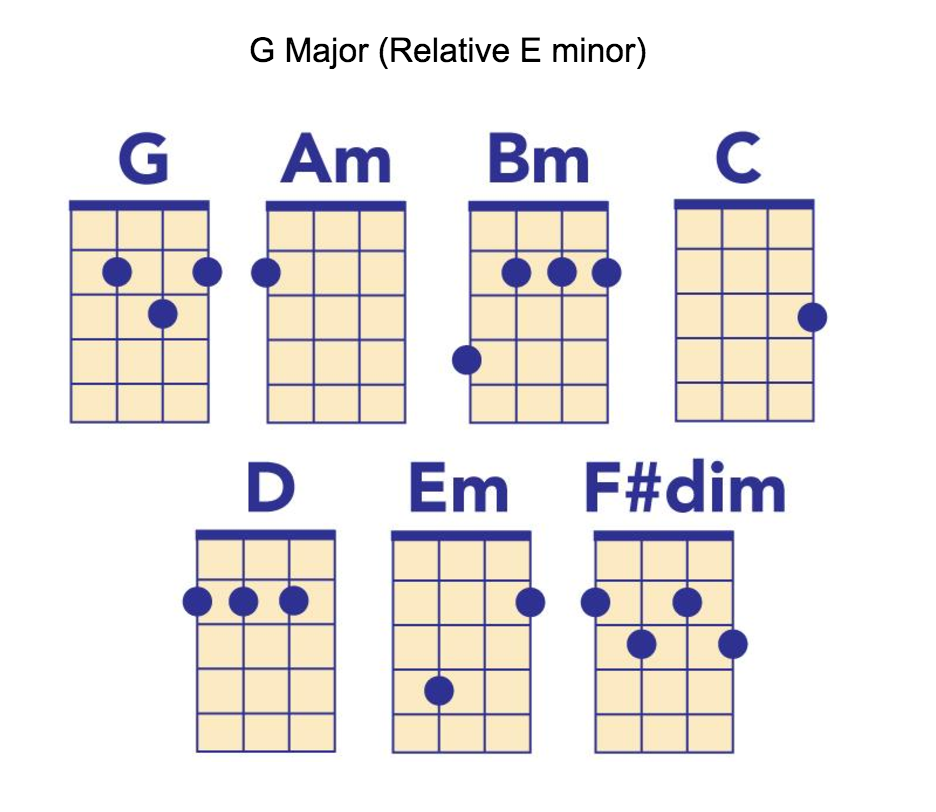 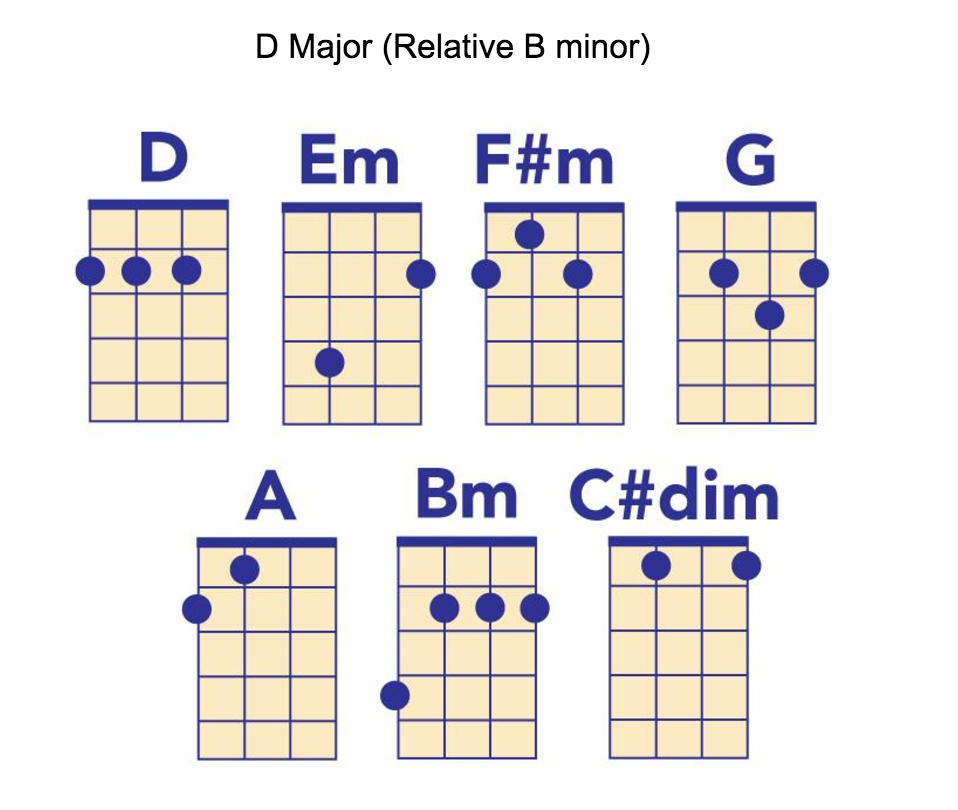 There’s many other extended chords, chord voicings and different chords from other keys out there, but what we’ve showed you here is more than enough to get you started.

Strumming chords on the ukulele

The key to strumming chords on the uke is to keep things as simple as possible. Playing strumming patterns that are too busy and complicated might take away from the song instead of adding to it. With the chords we just showed you, try a simple eighth note strumming pattern. With your right hand thumb and index fingers touching, lightly strum up and down for each chord as you count 1-and-2-and-3-and-4-and. When you’re confident, feel free to try tackling other strumming patterns, but the beauty of the ukulele is how simple of an instrument it is, so don’t feel like you need to learn anything too complicated if you don’t have to. 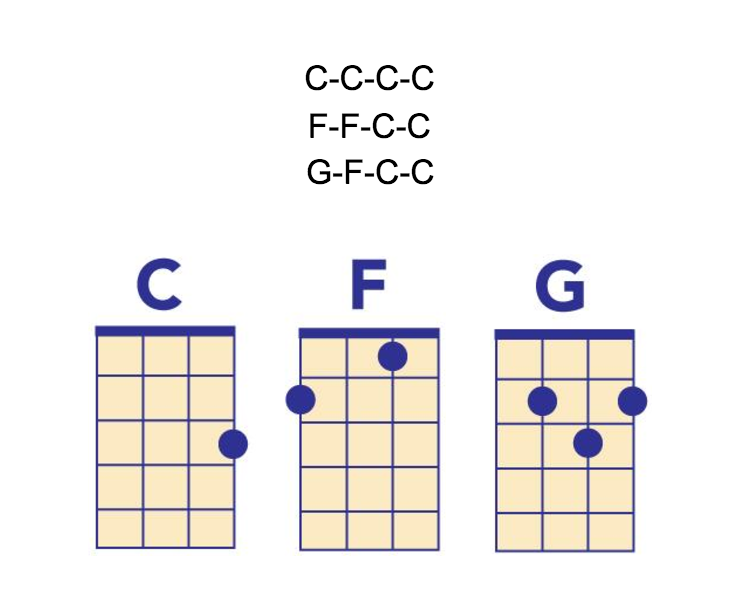 Arpeggios are sequences of notes that outline chords. Knowing how to play some simple major and minor arpeggios is helpful if you’re ever interested in learning how to write or improvise on the ukulele. Like scales, these shapes can easily be moved to other keys around the uke if they don’t include any open strings.

You can practice these major and minor arpeggios by creating a simple drill for yourself that has you transition from one arpeggio to another without pausing. Make sure to practice with a metronome and to use alternate picking whether you’re playing with a hard pick or your fingertips.

Put your uke skills to the test

Now that we’ve showed you how to tune and play chords, scales and arpeggios, you’re finally ready to learn your first song. Set in the key of C, “Stay With Me” by Sam Smith features simple chords that can be played on the ukulele with a simple strumming pattern. Are you ready? 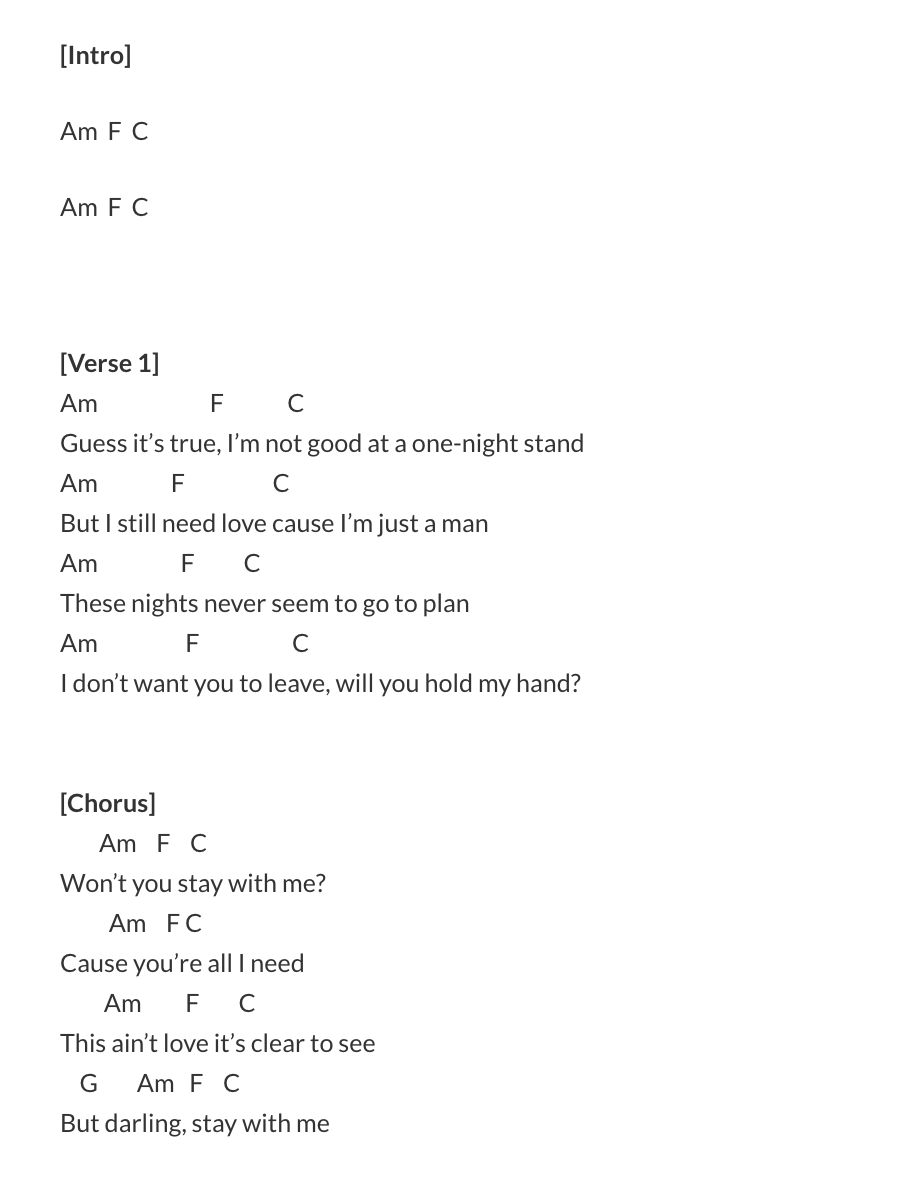 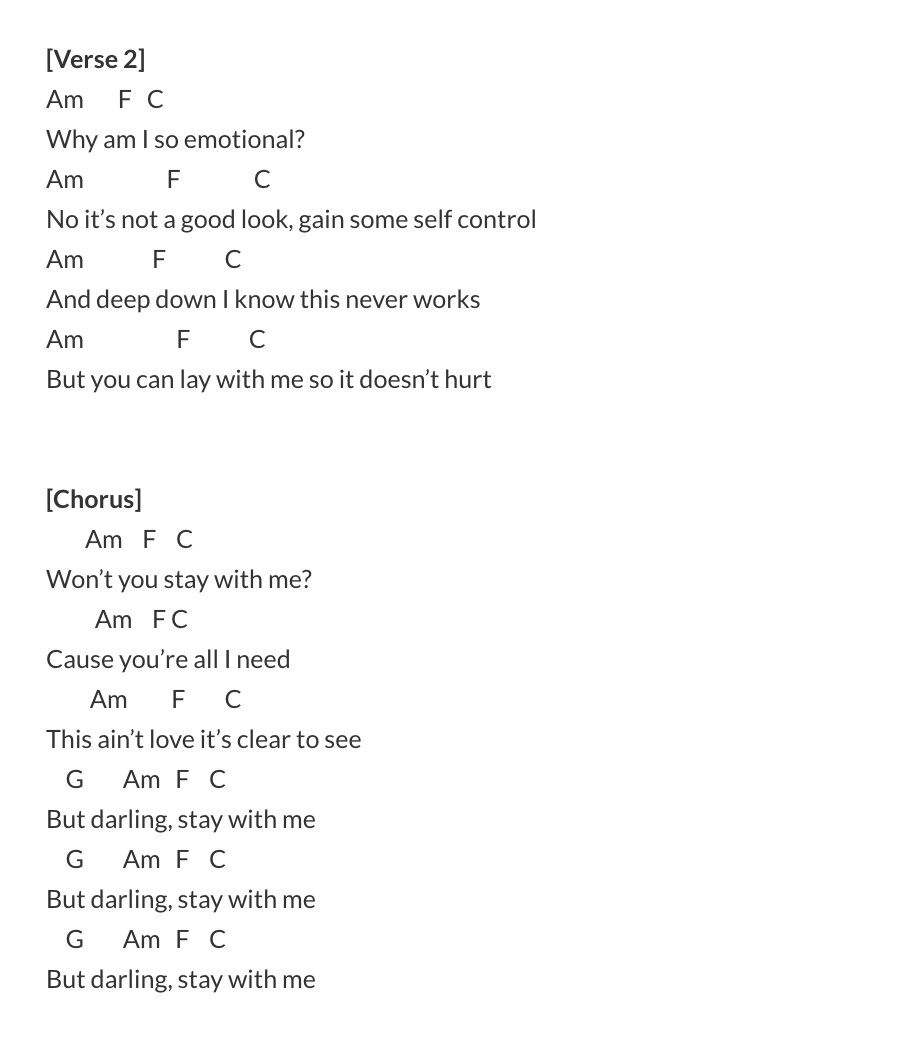 To practice, you can play along to the recorded version of this song or you can try singing and playing at the same time. Singing while playing the uke is a skill that takes time to develop, but the ukulele is an amazing instrument to sing and play to, so it’s well worth the trouble to learn. You now have all the skills and material you need to play the ukulele, but don’t stop here! There’s a ton of phenomenal free resources out there to help you master the ukulele, and and we recommend working with an experienced teacher in your area if you need some extra guidance. For more helpful articles about the world of music, check out the Musika Lessons blog.