“Take Me to Church” is a song by Irish musician Hozier for his debut extended play (EP) Take Me to Church (2013), as well as his self-titled debut album (2014). The song was released as his debut single on 13 September 2013. Hozier, a struggling musician at the time of this song’s writing, wrote and recorded the song in the attic of his parents’ home in Bray, County Wicklow, Ireland. A mid-tempo soul song, its lyrics detail Hozier’s frustration with the Catholic Church and its stance on homosexuality. It first caught the attention of independent label Rubyworks, where producer Rob Kirwan overdubbed the original demo with live instruments. Only two musicians are featured on the track, Andrew Hozier-Byrne (Hozier) and drummer Fiachra Kinder. 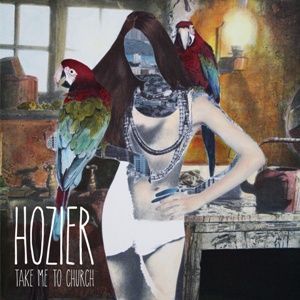 Title: Take Me to Church

Album: Take Me to Church

Take Me To Church Chords

“Take Me to Church” is in E natural minor for the Verse, hints at E harmonic minor for the Chorus with the Bridge in C major. It also has an interesting song form, in that, the Verse is in 3/4 time and is made up of a four-bar chord riff that’s connected with the D and C chords and a time change to 4/4. It’s creates an interesting mood change. The Verse then ends with an “Amen” Refrain.

There’s also a descending riff that’s played on the 6th string that’s used to connect the Verse and the Chorus. And, the rest of the tune concludes with conventional songwriting techniques.

Once you get past the time changes and somewhat unusual Verse structure you’ll find “Take Me to Church” is a fun and easy tune that you can quickly add to your repertoire. It’s also a great tune for those venturing into the world of singing while playing. The open chords and simple strumming patterns lend themselves to working on these skills.

I suggest using a combination of downstrums with the open chords for the Verse. Then, add targeted strumming for the Chorus and Bridge sections. Let me explain this further:

Let’s use an alternate (down and up) strumming technique for “Take Me to Church”. Amongst guitarists, this technique is referred to as the boom-chicka pattern. Here’s the breakdown:

Once you become familiar with chord charts, you’ll never want to go back. It’s just easier to see where you’re going when you have a map. And, it’s especially helpful when you’re not familiar with the song or there’s a section of the song that you don’t remember (Bridges and Interludes are notorious for surprising players and derailing a song’s performance). This tune has a Bridge complete with a key change and strumming feel. 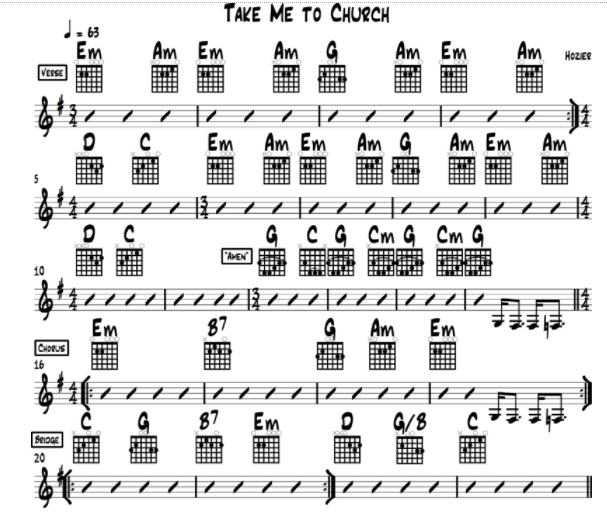 I hope that you’ve enjoy learning Take Me to Church chords. This is a beautiful tune that turns heads as most audience members recognize it but aren’t expecting to hear it. It’s also a beautiful piece of songwriting with a powerful message.

I appreciate you checking out this lesson. Thank you for hanging with me and I’ll see you next time.