American alternative rock band, the Goo Goo Dolls, originally recorded “Iris” for the soundtrack of 1998 film City of Angels, the song was later included on the band’s sixth album Dizzy Up the Girl. The song has contributed greatly to the band’s success. Iris chords feature an unusual guitar tuning in which most of the strings are tuned to D, giving the guitar a chorus-like effect. It also has an unusual time feel switching between 4 and 3.

“Iris” has become one of the biggest rock hits from the 90s and it’s also one of the biggest crossover hits in the history of popular music. The song has achieved success in modern rock, pop and adult contemporary genres, reaching number one on all of these radio formats and it was the most played song of 1998. 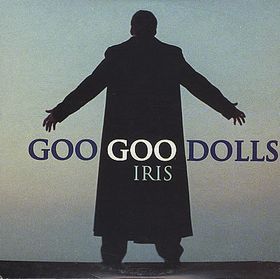 Album: Dizzy Up the Girl

Here are some helpful tips to keep in mind that will help you learn the tune faster while giving you some ideas for how to approach performing it. I provided some useful links above and I’ll take you through the Iris chords, accompaniment patterns, song form and a chord chart. Everything you need to get started playing this tune.

“Iris” is a soulful acoustic number. We can use the acoustic guitar part from the studio recording as a template that we’ll base our strumming approach on. However, there are some tricky parts that need to be ironed out and I needed to make some concessions for our arrangement purposes.

Here are a few of the issues:

With these things in mind, let me give you an overview of the song.

This song is mainly in the key of B natural minor and two-bar chord riffs are the main components of the song. The verse does hint at D major for the first half of the progression and the instrumental section has been abridged for our purposes. Also, I’ve adjusted the time feel in the intro and instrumental sections to make it less confusing (I’ll explain this and demonstrate it in the video).

We’re also gonna approach this from a strumming standpoint. We’ll be using a pick and I believe John Rzeznik and Robby Takac (the guitarists on this song) both use picks. Feel free to use your fingers to strum and they do provide more sound options. More importantly, I encourage you to approach the song however you feel most comfortable. These are just my suggestions.

I generally use a few basic approaches to acoustic-guitar playing. They’re mostly based on a fingerstyle technique that I’ll describe below and can be applied pick-style playing. But, the basic idea is that my thumb plays the bass note and my index and middle fingers brush the top part of the chord.

Here’s the basic technique that I use:

Iris chords are perfect for beginning fingerstyle players to strum. The right hand is notated as follows:

Next, we’ll assign the right-hand fingers to certain strings:

“Iris” uses an alternate (down and up) strumming technique and I’ll first describe it with a pick. Amongst guitarists, this technique is referred to as the boom-chicka pattern. Here’s the breakdown:

The Fingerstyle Version of the Boom-Chicka Technique

The thumb (or P) plays the bass note (boom) and the I-M fingers brush down and up on the higher three strings creating the chick-a.

If you don’t read music, please don’t be intimidated. This is a cheat sheet that can help you get through the tune quickly and easily. I find it indispensable for learning songs. Also, I can hand it to a seasoned musician and they can follow along without any problems.

Once you become familiar with chord charts, you’ll gonna never want to go back. It’s just easier to see where you’re going when you have a map. And, it’s especially helpful when you’re not familiar with the song or there’s a section of the song that you don’t remember (Bridges and Interludes are notorious for surprising players and derailing a song’s performance). So, heads up, this tune has an Instrumental section. 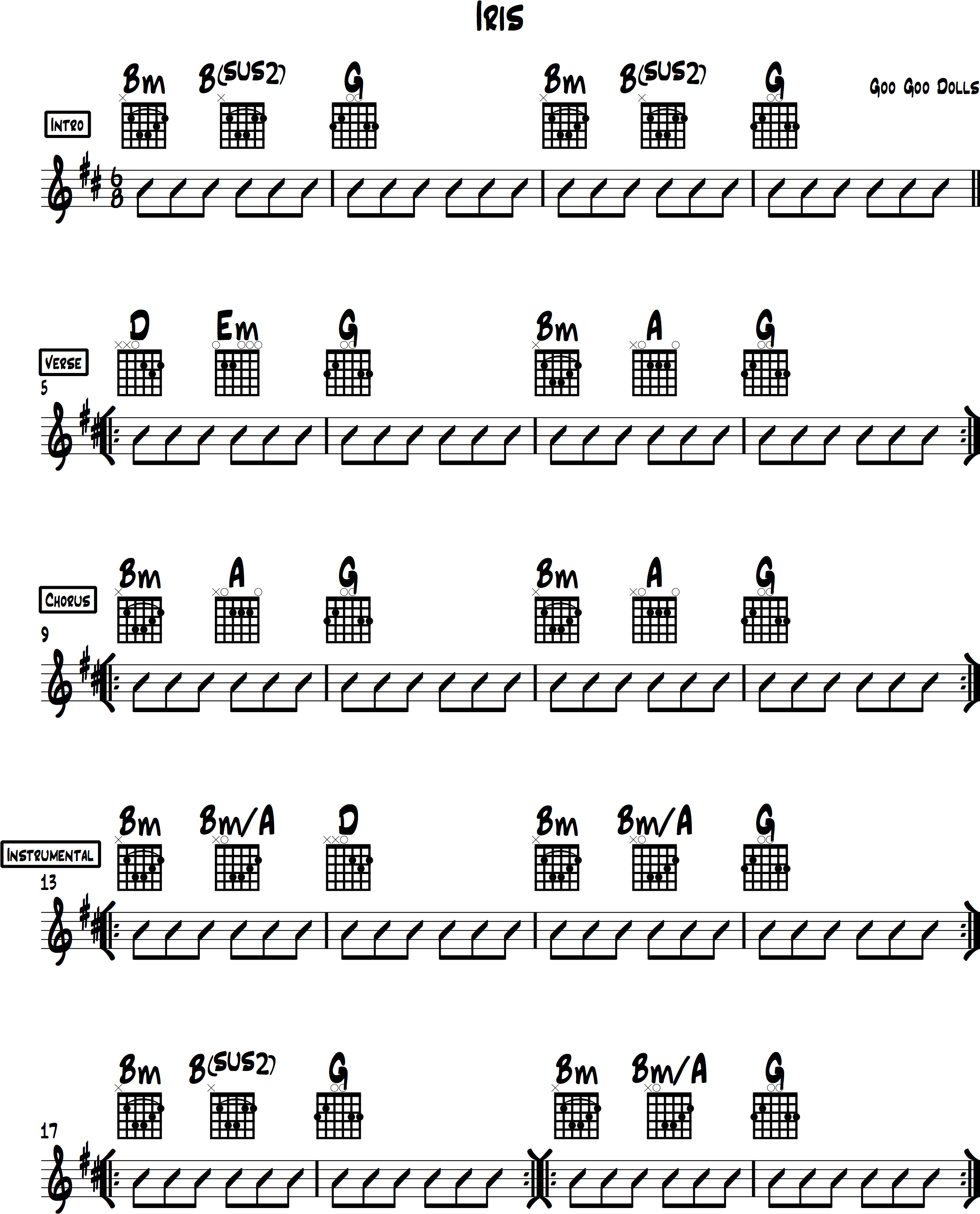 I hope that you’ve enjoyed learning Iris chords as much as I did in preparing this lesson for you. During the intro for this piece I mentioned that the Goo Goo Dolls achieved an incredible amount of crossover success with this tune. I encourage you to listen to check out other genres. Maybe you’ll discover some new music that will inspire you and motivate you.