Tim Bergling is a Swedish DJ and electronic music producer. You may recognize him better by his stage name, Avicii. “Wake Me Up” is a song written and produced by Avicii and it was released as the lead single from his debut studio album, True (June 17, 2013). American soul singer Aloe Blacc provides vocals and Mike Einziger of Incubus plays the acoustic guitar.

Bergling has been nominated twice for a Grammy Award, once for his work on “Sunshine” with David Guetta in 2012 and once for his song “Levels” in 2013. 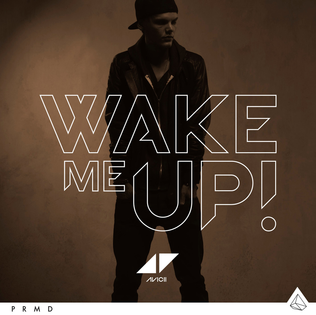 Title: Wake Me Up

Wake Me Up Chords

“Wake Me Up” is a driving acoustic guitar number and we’re gonna use Mike Einziger’s performance as our reference point.

The song is in the key of Bm and we’re gonna approach this from a pick-strumming standpoint. I choose this approach because this is more representative of the original recording. You can use a finger-strumming approach and that can offer many more options and textures than strumming with a pick. However, I do encourage you to approach the song however you see fit and feel most comfortable. These are just my suggestions.

This would be my fingerstyle approach to this tune and I’ve broken it down into two basic techniques.

I’ve included this section for those of you that may be interested in fingerstyle playing. The right hand is notated as follows:

I find that using a pick to strum the chords can be a little too harsh sounding for the mood of some songs. For that reason, I suggest developing your fingers to pluck and strum the chords. Let’s begin by assigning the right-hand fingers to certain strings:

I suggest using the bass chord and finger strumming techniques for some songs, For this tune I’ll simply use a pick. I explain this in more detail in the video.

The pulsing technique is a left-hand technique that is used to create a more percussive feel and will help you create the bouncy groove that makes people tap their feet, bob their heads and shake their booties.

Fret the chord as you normally would. Then, after you strum, release the pressure of your frethand without letting go of the chord position. The trick is to maintain contact with the strings as you pulse. Open chords are tricky to pulse because of the open strings. But, keep at it and you’ll find that it’ll quickly become one of your go-to techniques.

Once you become familiar with chord charts, you’ll never want to go back. It’s just easier to see where you’re going when you have a map. And, it’s especially helpful when you’re not familiar with the song or there’s a section of the song that you don’t remember (Bridges and Interludes are notorious for surprising players and derailing a song’s performance).

This tune doesn’t have an Interlude or Bridge and the progression is pretty repetitive. Just make sure that you make some subtle changes to your strumming pattern as this will help outline the changes between the song’s sections. 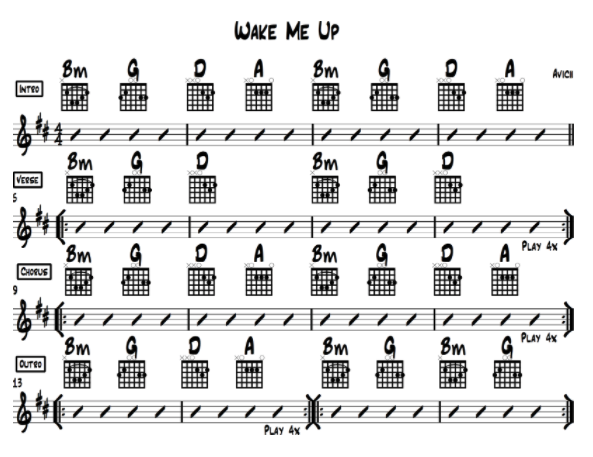 I hope that you’ve enjoyed learning Wake Me Up chords as much as I did in preparing this lesson for you. This is a fun song with a driving beat that people enjoy whether they recognize the tune or not.