Indie songs and the ukulele are a match made in heaven. This is because the indie genre largely favors accessible music built off songs that embrace simple chords, rhythms, and melodies. If we take the time to learn just a few simple chords on the ukulele, we’ll be able to have everything we need to play hundreds of awesome indie ukulele songs. It was a tough job, but we’ve hand-picked six of them to show you how to play in this article. All you’ll need is a ukulele and your voice. Ready to get started? 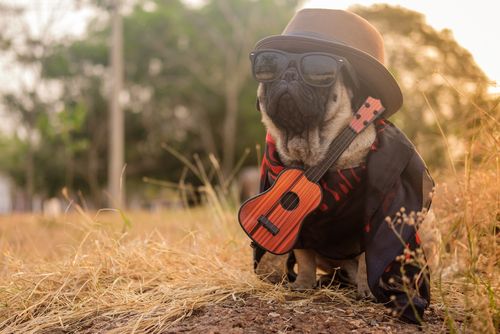 “I Will Follow You Into The Dark,” by Death Cab For Cutie

This acoustic guitar ballad translates beautifully to the ukulele. An unlikely hit for the Seattle indie rock band, “I Will Follow You Into The Dark” was recorded in mono with just one microphone, and the final version of the song features barely any editing. Written at age 29, the song is about Ben Gibbard’s struggle to comprehend the meaning of love’s relationship with death. “It’s just this idea that what if somebody dies and we’re just floating, just stumbling around in infinite darkness, and I’m just trying to find some kind of spiritual kind of peace with myself, and the world,” said Gibbard when he was interviewed about what he wrote the song about. 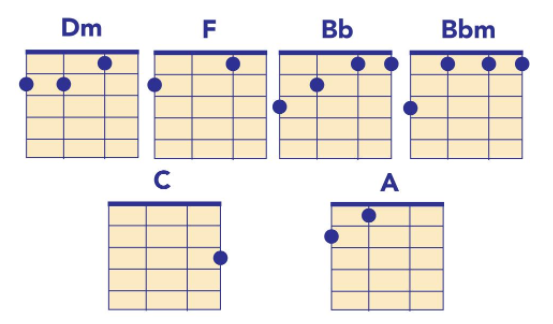 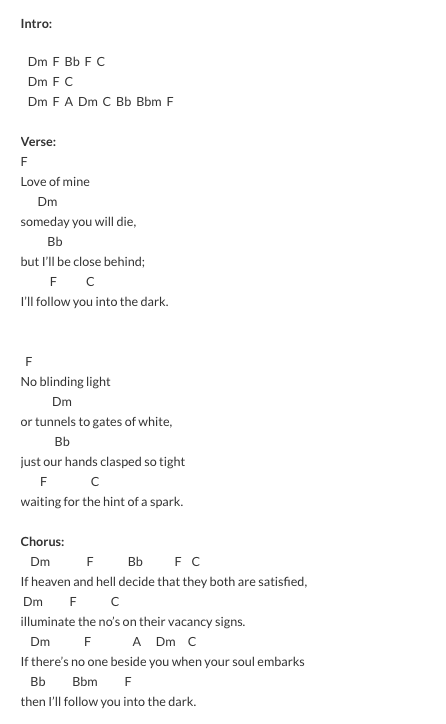 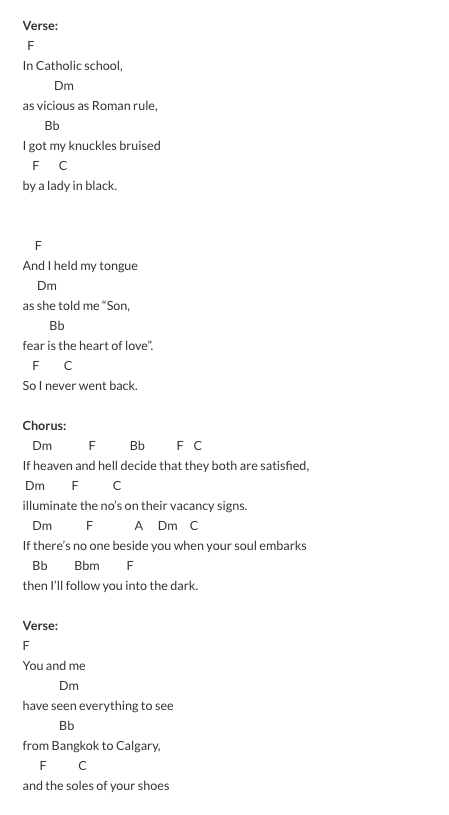 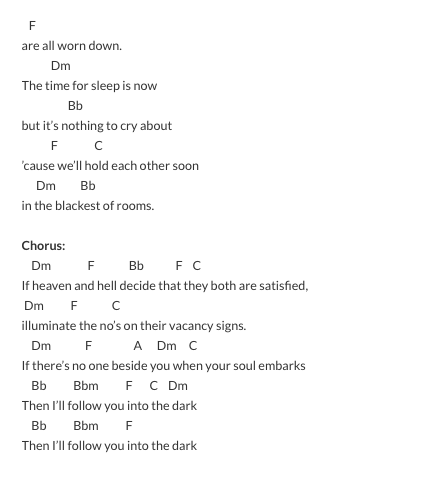 Released in 2008, this was the debut single from the excellent self-titled Fleet Foxes album. Gorgeous, thick vocal harmonies mask a song with chord progressions that are surprisingly simple and easy to play. It translates great as far as indie ukulele songs go. You’ll only need to know how to play E, F#m, A and B7 to be able to play this song. 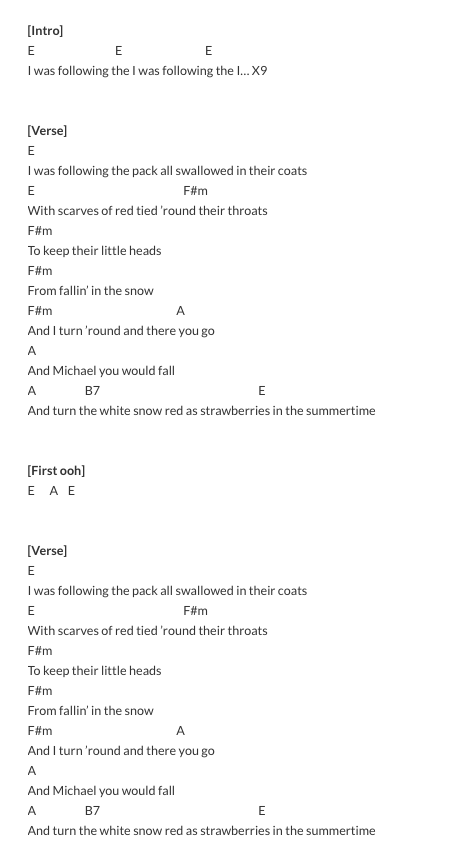 “Do You Realize,” by The Flaming Lips

You know you’ve written a great song when your home state adopts it as its official rock song. Such is the case with our next of our indie ukulele songs, “Do You Realize” by Oklahoma natives The Flaming Lips. Singer and principal songwriter Wayne Coyne wrote the song while watching his friend and bandmate go through painful withdrawals from heroin, a drug he was trying to wean himself off of. “Whenever I analyze the scientific realities of what it means to be living here on Earth,” Coyne remarked in an interview when he was asked why he wrote the song, “in this galaxy spinning around the sun and flying through space, a terror shock seizes me!!! I’m reminded once again of how precarious our whole existence is.” 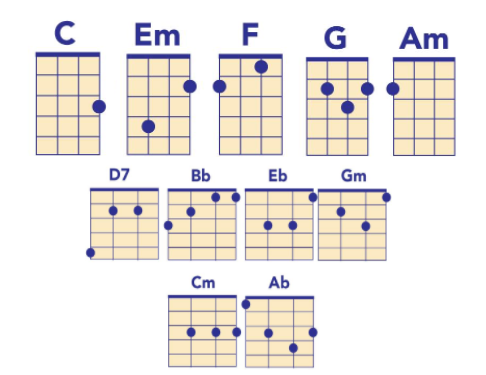 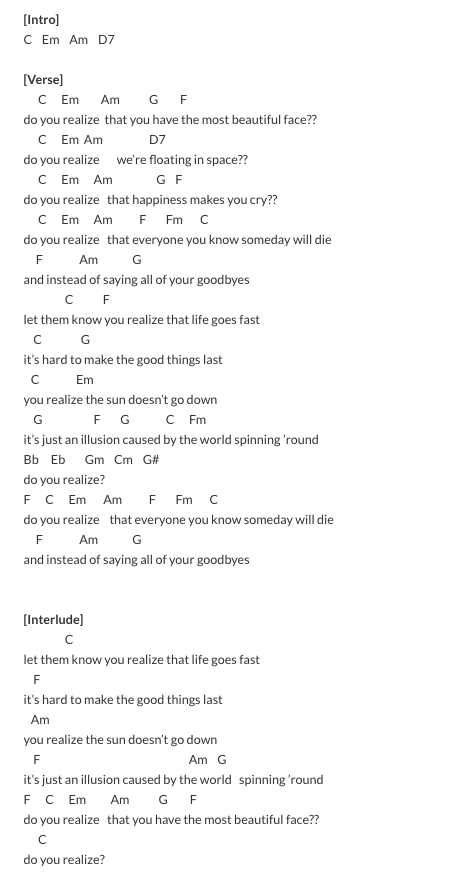 “Breaker” and all the other songs off of Deerhunter’s excellent recent album were written in the wake of a 2014 car accident that left principal songwriter Brandon Cox with serious injuries and a new outlook on life. The song boasts an almost retro feel that manages to simultaneously sound at home in the present and in the past. One could only assume that Cox was feeling nostalgic when he sat down to write this phenomenal song. 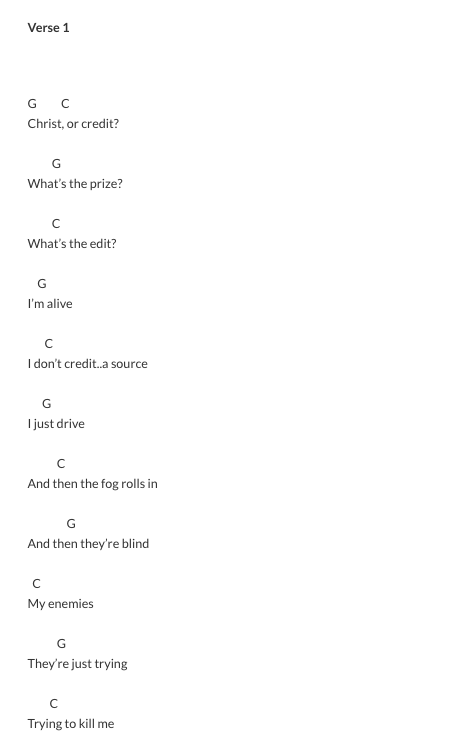 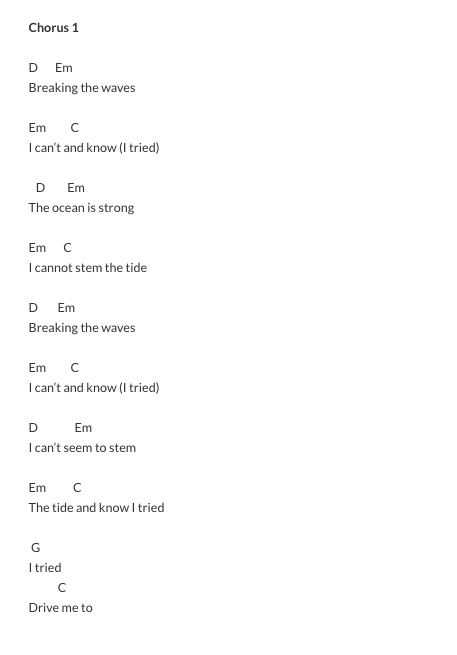 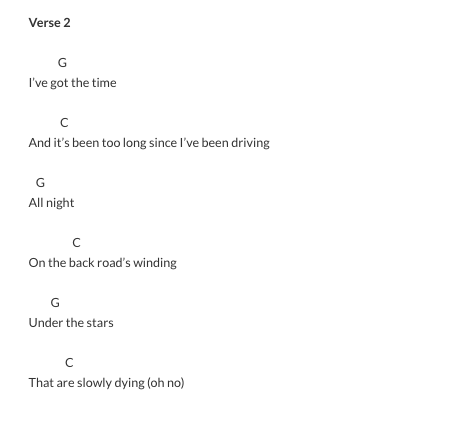 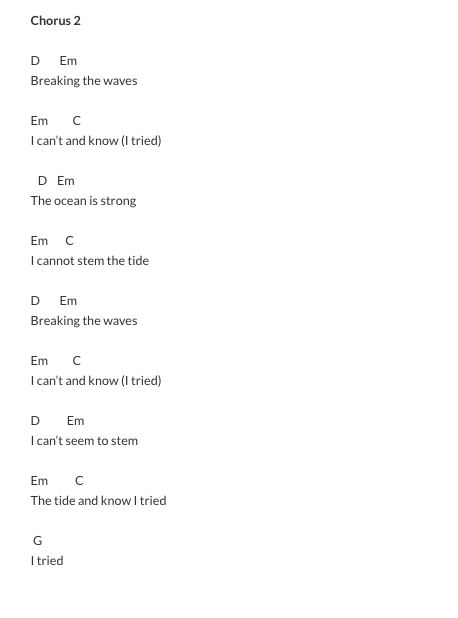 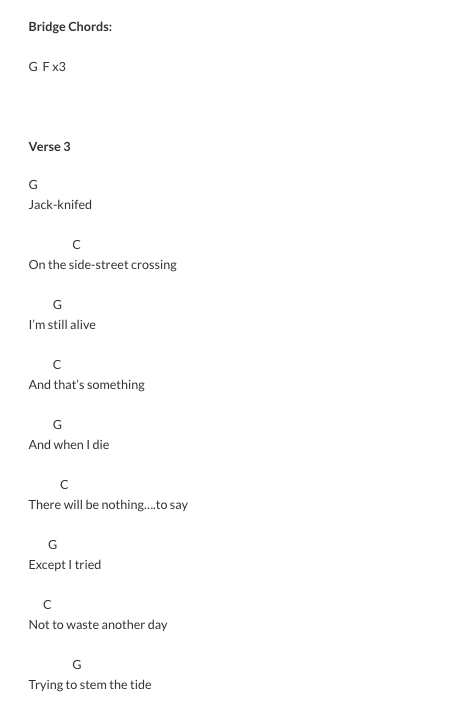 “Suffer For Fashion,” by of Montreal

This catchy song appears on of Montreal’s seminal album Hissing Fauna Are You The Destroyer. Songwriter Kevin Barnes wrote, produced, and played instruments on the album in addition to members of his family. Barnes is a huge fan of shrouding his music in mystery by playing around with alternate personals and conceptualism, and “Suffer For Fashion” serves as a captivating introduction for what’s widely considered to be his best album to date. 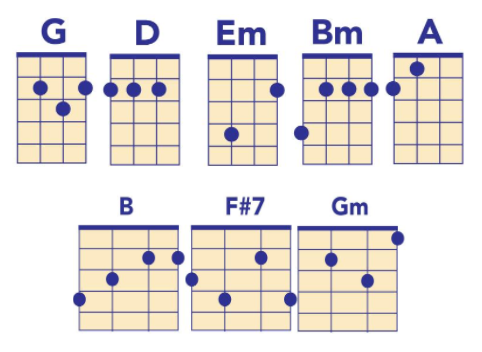 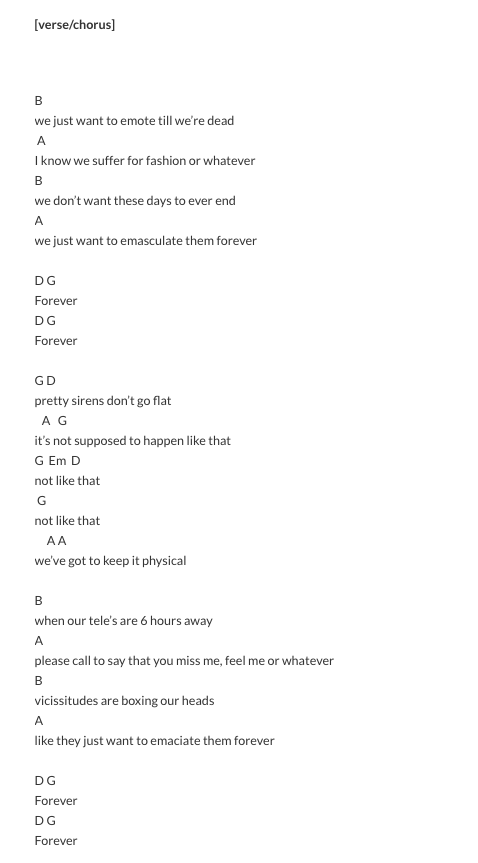 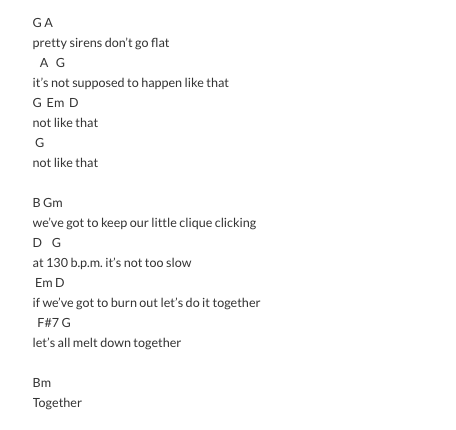 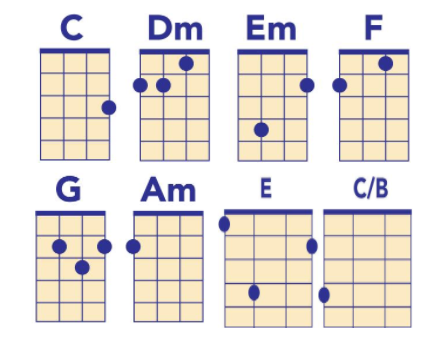 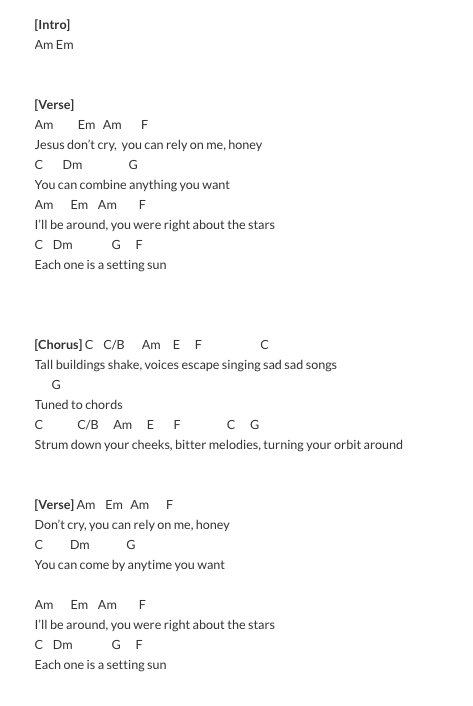 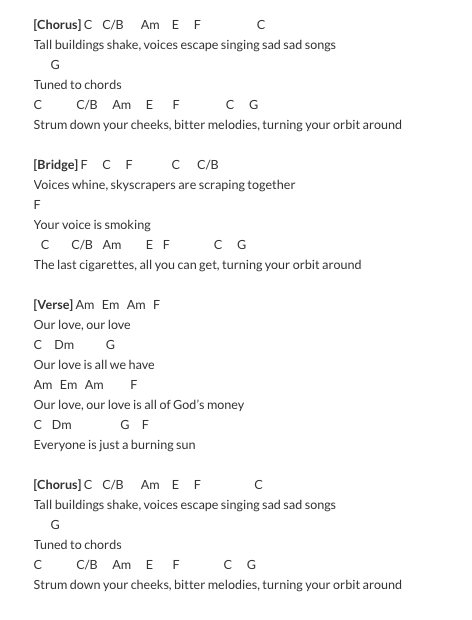 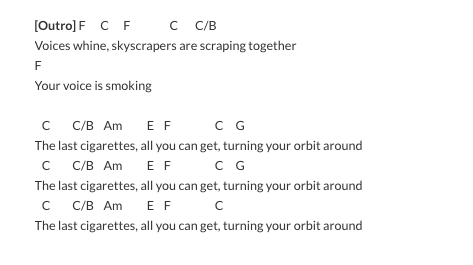 We hope you’ve enjoyed learning these indie ukulele songs. If you need help learning the chords for these songs, try finding an experienced uke teacher in your area. For more awesome articles, tutorials and videos about the world of music, check out the Musika Lessons blog.