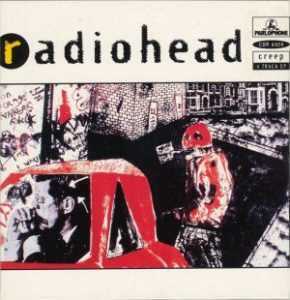 For this lesson we’re gonna check out Radiohead’s Creep. Radiohead is an English alternative rock band that released Creep as their debut single in 1992. Later, the song was featured on their first album, Pablo Honey (1993). Creep did not receive any early chart success. Despite that, upon its re-release in 1993, Creep became a worldwide hit. Attendees of Radiohead’s early shows demonstrated little interest in the band’s other songs. The band responded by playing it less often during the mid-to-late 1990s. Today we’re going to learn an easy Creep chords arrangement for acoustic guitar.

Here are some helpful tips to keep in mind when learning the Creep chords. I provided some useful links above and I’ll take you through the chords, accompaniment patterns, song form, and chord chart. Everything you need to get started playing this tune.

Creep is in the key of G. We begin with a G5 chord. They hint at the full G major sound in the Chorus, but for the Intro and the Verse I would suggest that you stay on the G5. Because the G5 sets the mood, it’s neither major nor minor so we’re not exactly sure where the song is going. Then we change to a B chord that creates this dreamy effect and solidifies that we’re in G major, not G minor. The C chord keeps the motion of the song moving forward but the Cm changes the mood again creating a sense of uncertainty.

Beautifully done. The chord movement reflects the tone of the lyrics. This song may seem simple, and that’s part of the genius. But, the change of texture from Verse to Chorus is masterfully executed and can be difficult to replicate. Keep this in mind when performing the song and learning the Creep chords.

Creep uses an open-position G5 chord followed by 5th-string-root barre chords. Playing this on an acoustic guitar could cause hand strain and cramping. So, if you start to feel pain, stop! Relax and let your hand rest. Slowly you’ll build up the stamina for full-barre chord playing.

For the Intro and Verse we’ll use arpeggios. As we fret the chord, play the root of the chord on beat 1 and then loosely and sparingly pick the other strings allowing them to ring together. Feel free to experiment with different picking patterns.

For the Chorus, we want to build in intensity. We don’t necessarily need to get louder although that will naturally happen as a result of the change in technique. And, alternate strumming is perfect for this section.

Alternate strumming is simply using down and up strums. However, I have a few tips that will make your strumming sound more natural and musical. Begin with a downstrum aimed at the root or the lower part of the chord (the bottom two or three strings). Then, for the up strum, aim for the higher three strings.

The pulsing technique is a left-hand technique that is used to create a more percussive feel and will help you create that bouncy groove that makes people tap their feet, bob their heads and shake their booties.

Fret the chord as you normally would. Then, after you strum, release the pressure of your fret hand without letting go of the chord position. The trick is to maintain contact with the strings as you pulse. Open chords are tricky to pulse because of the open strings. But, keep at it and you’ll find that it’ll quickly become one of your go-to techniques.

I’ve included a Creep chords chart, which is a simple road map that shows you each chord and how long to play it for. If you don’t read music, please don’t be intimidated. This is a cheat sheet that can help you get through the tune by showing you the song form.

Once you become familiar with chord charts, you’ll never want to go back. It’s just easier to see where you’re going when you have a map. And, it’s especially helpful when you’re not familiar with the song or there’s a section of the song that you don’t remember. Bridges and Interludes are notorious surprises that can derail a song’s performance. However, this song doesn’t have a Bridge but does have an Interlude or Instrumental section. Fortunately, it’s the same 8-bar chord sequence as the other sections of the song.

You may be wondering, why, if the 8-bar pattern is constantly repeated, did I bother putting together a chord chart:

It’s especially important in songs like these, where the chord pattern is repetitive. And, Radiohead does a beautiful job in changing textures as the song progresses. It’s a great lesson in changing mood from section to section. 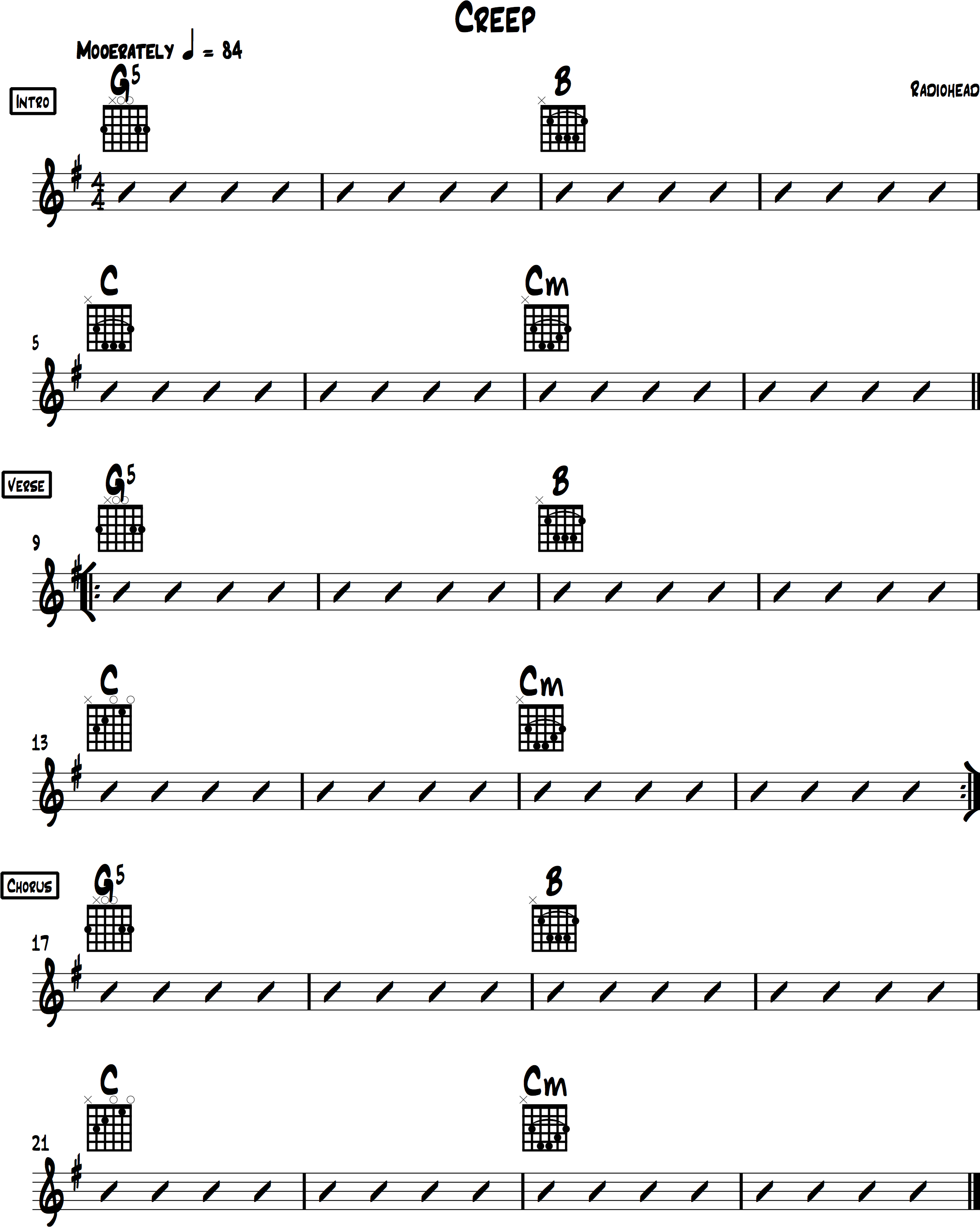 Creep has become a rock standard and can be fun to play with a couple of guitars or a full band. The beauty of this song lies in its simplicity so don’t overthink it. You’ll also need a top-notch singer to deliver this song’s message.

I hope that you’ve enjoyed this lesson on the Creep chords and that I’ve helped you add another song to your growing repertoire.

Thanks for hanging with me.