So you’ve been learning to play the flute. You’ve probably seen and heard the flute in music your whole life. Maybe you even know that different versions of the flute are played in multiple cultures 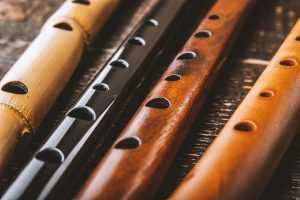 across the globe. But where did the flute come from originally and what is the history of the flute?

Consider the simplest definition of a flute: a hollow tube that is blown, without reed, creating a sound as the air inside the tube vibrates. Though simple, this definition really is unique to the flute family. The transverse flute, held horizontally to the right of the body, is the type of flute we play most often today, and even with this narrower definition, we find the history of the flute stretches back to antiquity.

Origins of the Flute

The history of the flute is interesting because so much of the origins of the flute remain a mystery. We don’t know when or where the first flute was made, though we know that flutes have been around since before written language. We find depictions of transverse flutes in artwork as early as the ninth century BC, and vertical flutes have been found in the Swabian Alb region of Germany that are said to be from 43,000 to 35,000 years ago.

Well known flute player and teacher, Sir James Galway, argues that the flute was probably the first instrument every invented, its only contender being a simple drum. Since we find flutes in every culture, every country, and every part of the world, Galway also says the flute was probably invented many times, by many different people in different places. Below, we’ll explore the earliest known flutes and where they come from.

Ancient Egyptians believed that creating representations of happy scenes in art would give them a happy afterlife. Because of this, and the dry climate of Egypt that has helped to preserve art, archeologists found many depictions of flutes in both tomb paintings and sculptures. The Egyptians also wrote captions on much of their artwork, so we even know the authentic Egyptian names for each of the instruments depicted, and can pick out which are flutes from both name and picture.

The earliest depictions of flutes in Egypt date from around 4,000 BC. The player holds the flute horizontally across the body, blowing across the upper end of the tube. The flute is a straight tube cut from cane about a yard long, with a narrow diameter, perhaps half an inch, which would have made it possible for a player to get a strong sound blowing across the top of this flute. Four to six holes were placed along the lower part of the tube as finger holes.

Israel has had a written history for a long time, so we’d expect to know a lot about the musical instruments from this region. But the Jewish teachings discouraged visual representations, so all we have to draw conclusions from are written descriptions of instruments. This has made it fairly hard to determine whether the instruments in the Bible and Talmud are really true flutes or not, and historians differ on their interpretation.

What we do know is some kind of pan pipe or reed pipe was popular, possibly as far back as 1,000 BC. When Israel adopted a formal king like their neighboring countries, musicians were recognized and encouraged, and Israel would have been exposed to music from many neighboring countries when foreign visitors came to court.

Visual art held great importance in Ancient Greece and Rome, so art progressed immensely and the influence of Greek and Roman art spread to the rest of the Western world during this time 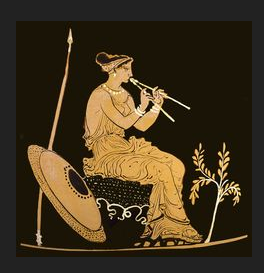 period. But though the Ancient Greeks studied the mathematical aspect of music, they hardly developed musical instruments at all. In fact, most of the music and the musical instruments they studied were imported from Asia. Instrumental music was considered to be taking its inspiration from speech, and therefore was looked down on by many as an entertainment for lower class society.

Representations of musical instruments abound in Greek and Roman art, but most of these are stringed instruments. From these pictures that we know pipes were used especially to encourage men during athletics. However, these pipes were most likely reed pipes, and not true flutes. The first true depiction of a flute in Rome is from 169 AD. Stamped on the face of a coin from the Syrian town of Caesarea, the flute shown is even a transverse flute.

Though in general Etruria was less developed than the rest of the Ancient World, it’s actually where one of our clearest and earliest depictions of the flute comes from. The history of the flute in Etruria starts with a relief on an urn from an Etruscan tomb depicting the head and shoulders of a musician playing the transverse flute. The player holds the flute to his right, his fingers are over finger holes in the flute, and the flute includes a embouchure hole about one quarter along the tube.

Music historian Curt Sachs lists four different types of flutes first present in China, each with distinct names as found in written documents. The first appear in the twelfth or eleventh centuries BC,

A description of the ch’ih flute from the eighth century BC explains that it was the earliest recorded transverse flute – made from bamboo and stopped at one end. The ch’ih was often played in unison with a pottery flute or ocarina.

The flutes of China also traveled to Japan and were influential on the earliest Japanese flute designs.

Flutes made a late appearance in India compared to other countries, and we don’t have any depictions of them until the first century AD. However, what is interesting is how much importance the flute held in Indian society. The transverse flute also shows up immediately alongside the pan pipes. Whistle flutes were also popular, but were viewed as merely shepherds’ instruments and weren’t played or respected by the upper class.

Depictions of the transverse flute first show up in temple reliefs at Sanchi, central India. The flute was repeatedly illustrated throughout the first to fourth century, often suspended in space, emphasizing it as a divine instrument. It’s said that the god Krishna played flute, and there are gestures associated with flute playing in some narrative dance from this area. 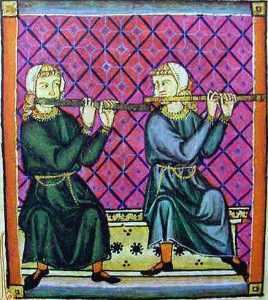 Transverse flutes known as fifes were popular in the Middle Ages as far West as Europe as instruments to accompany infantry marches. They were made out of a single piece of wood and were just under two feet in length. They generally had six finger holes and were pitched in D Major.

Instruments during this time still followed a vocal model, so instrument makers experimented with designing flutes of varying sizes – soprano, alto, tenor, and bass – to accompany the four different voice ranges. In these experiments, the bass flute became the first flute to be made out of two pieces in order to better regulate the tuning of the instrument within the ensemble. Indeed some composers used all four sizes in their compositions. Martin Agricola’s Musica instrumentalis deudsch is one of the earliest examples, published in 1529.

The transverse flutes made during this period are really the precursors to the modern flutes of today. The makers of these flutes slowly adapted the finger holes to be more evenly spaced, and though they did not yet have keys, Marin Marsenne drew up a sketch of what these keys might look like and explained their importance to expanding the chromatic abilities of the flute.

History of the Flute Continues

Who knows what inspired the creation of the flute? Maybe someone heard the wind blowing across a broken reed. Maybe while sucking the marrow from a bone, someone made a sound they found beautiful and worked to develop it.

The truth is we can never really pinpoint the beginning of the history of the flute. It could be that far before any of the examples we have of flutes, flutes made from reeds, bamboo, and other material have already decomposed. As flute players, we are continuing on a history that truly has been through the ages. The history of the flute begins before humans can even remember, and by playing, we help it continue on just as long into the future. 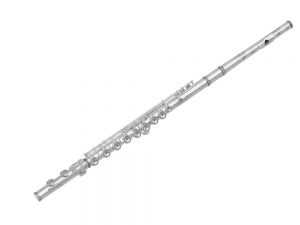 Lisa is a writer and editor specializing in aviation and the arts. She earned a minor in Music at Waldorf University in Forest City, Iowa where her study focused on flute, piccolo, and soprano and tenor recorder. She is a general contributor to the Musika blog.